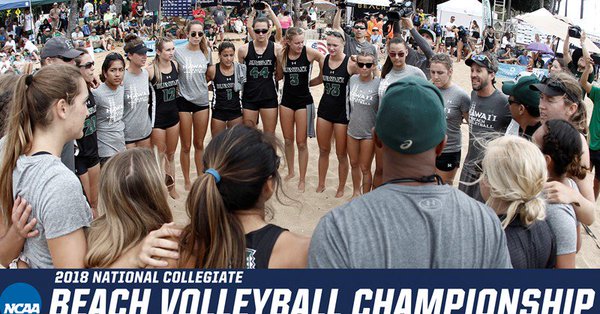 The University of Hawai'i beach volleyball team will vie for the national title in the NCAA Beach Volleyball Championship, May 4-6, in Gulf Shores, Ala. The 3rd-seeded Rainbow Wahine (35-3) open tournament action on Friday, May 4 at 1 p.m. ET (7:00 a.m. HT) against No. 6 seed South Carolina. Current Photo via Hawaii Athletics

GULF SHORES, Ala. – The University of Hawai’i beach volleyball team will vie for the national title in the NCAA Beach Volleyball Championship, May 4-6, in Gulf Shores, Ala. The 3rd-seeded Rainbow Wahine (35-3) open tournament action on Friday, May 4 at 12:00 p.m. CT (7:00 a.m. HT) against No. 6 seed South Carolina.

The winner will advance to the 4:00 p.m. CT (11:00 a.m. HT) game against the winner of No. 2 Pepperdine and No. 7 LSU. The Sandbows earned one of three West region bids into the eight-team, double-elimination tournament and will make their third straight appearance in the NCAAs. UH went 3-2 in last year’s tournament and finished a program-best third.

This will be just UH’s second all-time meeting against South Carolina (24-7). The Rainbow Wahine defeated South Carolina, 3-2, on the road in Columbia earlier this season on March 24, en route to capturing the Gamecock Challenge.

Hawai’i enters the NCAAs as the three-time Big West champs. The Rainbow Wahine captured the 2018 Big West Tournament at home at Queen’s Beach, April 27-28, and have now won a school-record 30 straight matches, tied for the longest streak in the nation with top-ranked UCLA. The Rainbow Wahine are 13-2 on the mainland this year, including 11-1 at neutral sites.

The event will be televised live by ESPN networks, with ESPNU providing live coverage on Friday, May 4 starting at 4 a.m. HT. Live coverage will continue Saturday, May 5 on ESPN2, starting at 8 a.m. HT and Sunday, May 6 at 5:30 a.m. on ESPN2. The championship dual will air on ESPN Sunday, May 6, at 8 a.m. ET. Additionally, live streaming coverage of every court throughout the tournament will be available on ESPN3.