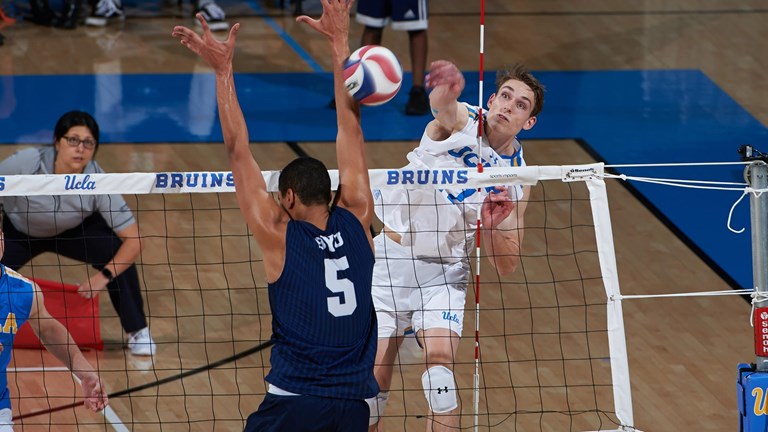 Home-standing survived a scare from a feisty Harvard team using a double-double from senior opposite Christian Hessenauer and a dominating .390 hitting effort to edge past the Crimson in four sets to advance to Thursday's Final Four.  Current Photo via UCLA Athletics

LOS ANGELES – Home-standing survived a scare from a feisty Harvard team using a double-double from senior opposite Christian Hessenauer and a dominating .390 hitting effort to edge past the Crimson in four sets to advance to Thursday’s Final Four.

Behind Hessenauer, who rounded out a double-double with a team-best 10 digs and six blocks, UCLA got double-digit kill efforts from sophomore middle Daenan Gyimah (11) and senior outside Jake Arnitz (11). Redshirt senior middle Oliver Martin also had a standout night with nine kills on nine errorless swings to go with five stuffs. Gyimah added six blocks and was one of five Bruins with an ace to his credit.

Harvard played without its star hitter, senior Brad Gretsch, who reportedly suffered a concussion in pregame warmups.  Nonetheless, the Crimson ran a balanced attack with six players managing five or more kills. Sophomore setter Matthew Ctvrtlik led the way with eight putaways, followed by sophomore outside Erik Johnsson and Trevor Dow’s six apiece. Seniors Jack Heavey, Marko Kostich and Riley Moore turned in five kills each in the their final match for the Crimson. Heavey, an outside hitter, and Moore, a middle blocker, also put up a team-high four blocks.

UCLA outhit Harvard .367 to .348, but gave away 13 points on errors, seven serves and six hitting errors, helping the Crimson to a 25-23 win. The teams split the first 18 points of the match. From there, Harvard scored seven of the next 10, including two Dow kills, to go up 16-12. Trailing by four at 17-13, UCLA put together a 6-2 run to pull even with Harvard at 19-all. Martin downed two kills and Arnitz added a kill and a block in the rally. Another Arnitz putaway put the Bruins on top 20-19 and forced a Crimson timeout. Harvard scored three straight out of the break on a service error, a Johnson kill and a stuff by Kostich and Dow, to regain the lead at 22-20. The Bruins called timeout to talk it over and scored two of the next three on a Hessenauer putaway and Crimson service error. A Johnson kill gave Harvard a set-point try at 24-22. Hessenauer thwarted the first attempt with his fifth kill, but served into the net to give Harvard the 25-23 win.

Hessenauer downed six kills in Set 2 and the Bruins outhit Harvard .323 to .105 en route to a 25-21 win to even the match. The Crimson led 5-3 early including a kill and a block by Heavy, but UCLA rallied to tie it up at 6-all. Two Bruin miscues and a Moore kill put Harvard on top 9-7. UCLA countered with eight of the next 12 points, with help from four Crimson errors, to take a 15-13 lead of its own. Harvard scored three in a row, including a stuff by Moore and Heavey to go up 16-13, but it was nearly all Bruins from there. UCLA scored 10 of the final 15, starting with five straight, to close out a 25-21 win. Hessenauer notched three kills and a block down the stretch, while Ma’a downed the final point on an overpass kill.

UCLA won Set 3 running away, taking an early 5-0 lead and pushing ahead by as many as 14 in the 25-11 win. The Bruins hit .409, while limiting Harvard to a -.083 effort with help from six blocks. Gyimah heated up with four kills and three blocks, while Hessenauer turned in three kills and four stuffs. After falling behind by five early, the Crimson never got closer than four the rest of the way, last at 8-4 on a Heavey kill. Back to back stuffs by Martin and Hessenauer capped a 5-0 UCLA run to end the stanza.

The Bruins carried the momentum into Set 4, scoring four of the first five points. Harvard worked its way into a tie at 6 with two Dow kills and two UCLA miscues. After another knot-up at 7, the Bruins used a 5-2 run to vault ahead 12-9 with kills by four different players, including two by Hessenauer. A Johnson kill and a rare hitting error by Gyimah had the Crimson back within one at 12-11. After trading points over the next eight serves, a Ma’a kill and Heavey miscue put the Bruins up three at 18-15. Two Hessenauer kills and a stuff by Martin and Missry lifted the edge to four at 22-18. A Missry putaway gave UCLA its first match-point try and Martin downed his ninth kill in nine perfect swings to wrap up the 25-21 win.