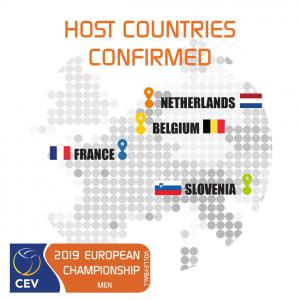 For the first time ever, four countries - France, Slovenia, Belgium and the Netherlands - will co-host and co-organize the event, which will include a record 24 teams in the final round. Current Photo via CEV

With EuroVolley 2017 in the books, the CEV announced a historic decision in regards to the hosting of EuroVolley 2019. For the first time ever, four countries will co-host and co-organize the event.

France, Slovenia, Belgium and the Netherlands will act as the host sites for a record 24 teams in the final round. In 2017, 16 teams participated in the final round in Poland. With the four country setup and increased field, each country will host a pool six teams, including its own national team. The top four teams in each pool will then qualify for the next round and then a quarterfinal match. One semifinal will be played in Slovenia and the other in France. The medal matches will be played in France.

“I would like to commend the efforts made so far by our friends from France, Slovenia, Belgium and the Netherlands – they joined forces and have come together to deliver a real volleyball party in two years,” CEV President Aleksandar Boricic said. “This tournament will take the most prestigious volleyball competition in Europe from Brussels, the capital of the European Union, to Paris via Ljubljana and the Netherlands, so we can look forward to joining an unprecedented volleyball party. We invite fans and media alike to come – and I can promise you that as soon as the 2017 women’s European Championship finishes, the CEV will start working with all four countries in order to deliver the experience of a lifetime, something which will have a lasting legacy on the growth of volleyball across the whole of Europe.”

The host cities for the Sept. 13-29, 2019, event will be announced at a later date, although Llublijana, Slovenia, and Antwerp and Brussels, Belgium, have been confirmed.

This is not the first multi-country hosting effort. The first came in 2005 as Italy, Serbia and Montenegro teamed up for the men’s EuroVolley. In recent years, two-team host bids have been common: Austria and the Czech Republic in 2011, Denmark and Poland in 2013 and Bulgaria and Italy in 2015.