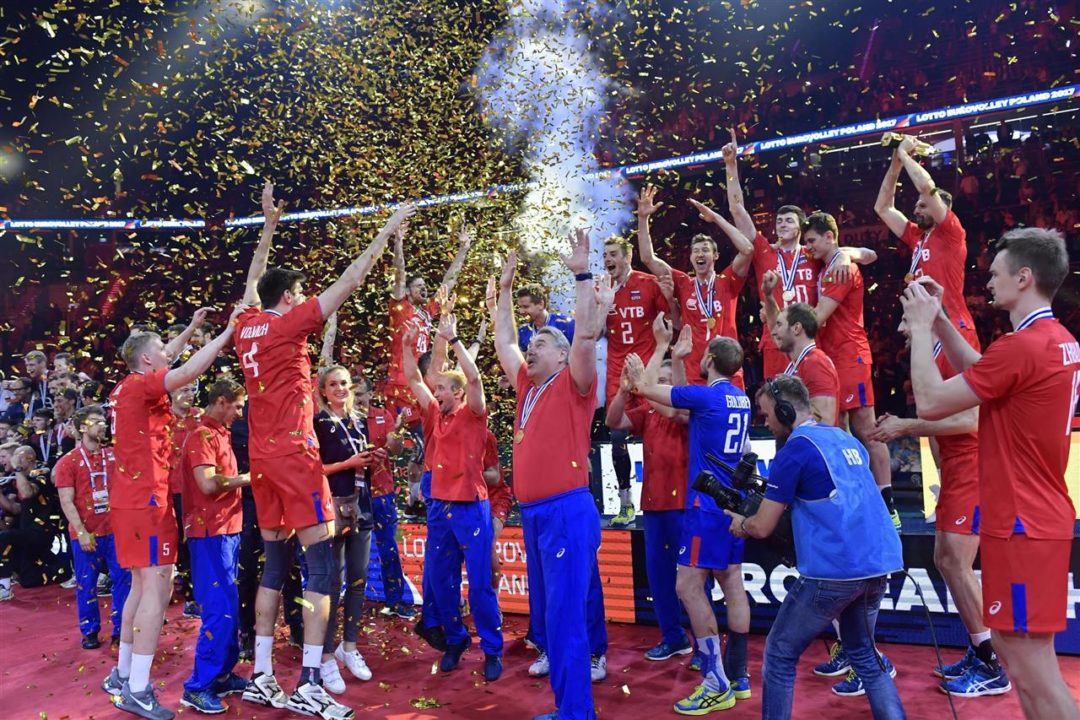 Fourth-ranked Russia had to battle through a feisty German squad in a five-set affair en route to its record 14th European title and first since 2013. Prior to the final, the Russians had not dropped a single set. Eighth-ranked Germany, meanwhile, grabs silver in its first ever #EuroVolley podium finish.

“It was a tough final match, but it is a final of a European Championship so it cannot be an easy game,” Russian coach Sergey Shlyapnikov said. “We started the match very well; however, Germany soon improved their game. I was aware that anything could happen here, because we were fighting for the gold medal. So even when Germany led 5-2 in the tiebreak, I still believed in our victory and I said it to my players as well.”

Germany led 5-2 in Set 3, but Russia erased the point margin and took a one-point lead of its own at 7-6. A moment of drama came soon after as German star Gyorgy Grozer crashed the floor, but the opposite recovered to pick up a kill. Russian stars Maxim Mikhailov and Dmitrii Volkov came through to lift Russia to a 12-9 lead giving the eventual champions a little breathing room. Mikhailov sewed up the gold medal with his 18th kill of the match at 15-13.

Russia led Set 1 throughout, jumping ahead 7-2 after a pair of Volkov aces. Down 8-4, Germany managed to pull even at 14-all, but Russia capitalized on German miscues en route to a 20-16 lead. Maksim Zhigalov served up an ace to put the Russians up five at 23-18, before Mikhailov closed out the 25-19 win with a kill.

Germany led by as many as eight in a wire-to-wire Set 2 win. The Germans raced out to a 6-2 lead and carried on to a 14-8 advantage as Russian errors piled up. Grozer starred and upped the edge to 22-14. Russia made a late charge behind a serving run by Egor Kiluka, but Grozer delivered the final nail in a 25-20 victory.

Russia led by as many as four at 10-6, but Germany chipped away to knot the score at 12-all, the first of 10 ties in the set. After trailing 17-16, the Russians rallied and eventually scored three of the final five points, winning 25-22 on a Mikhailov putaway.

Germany led Set 4 nearly throughout, save a 1-0 deficit. Germany went up 8-3 and boasted a 13-9 edge midway through as Grozer and Kaliberda paced the offense and Kampa served up an ace. Krick also heated up offensively, leading the team to a 16-10 advantage. Grozer wrapped up the set at 25-17 for the Germans, sending the match to a decisive fifth set.

“After this game I feel somehow lost,” Kaliberda said. “I think that I would be happy if I had a gold medal now around my neck, because we had a real chance to win. This result is also good for us, as we were fighting, and everybody tried to do his best today. I am happy, but it is a bittersweet feeling, when you are so close to winning and you end up losing. I would have signed for this second place before starting this tournament, so it is ok. The European Championship is always a nice time for all of us.”