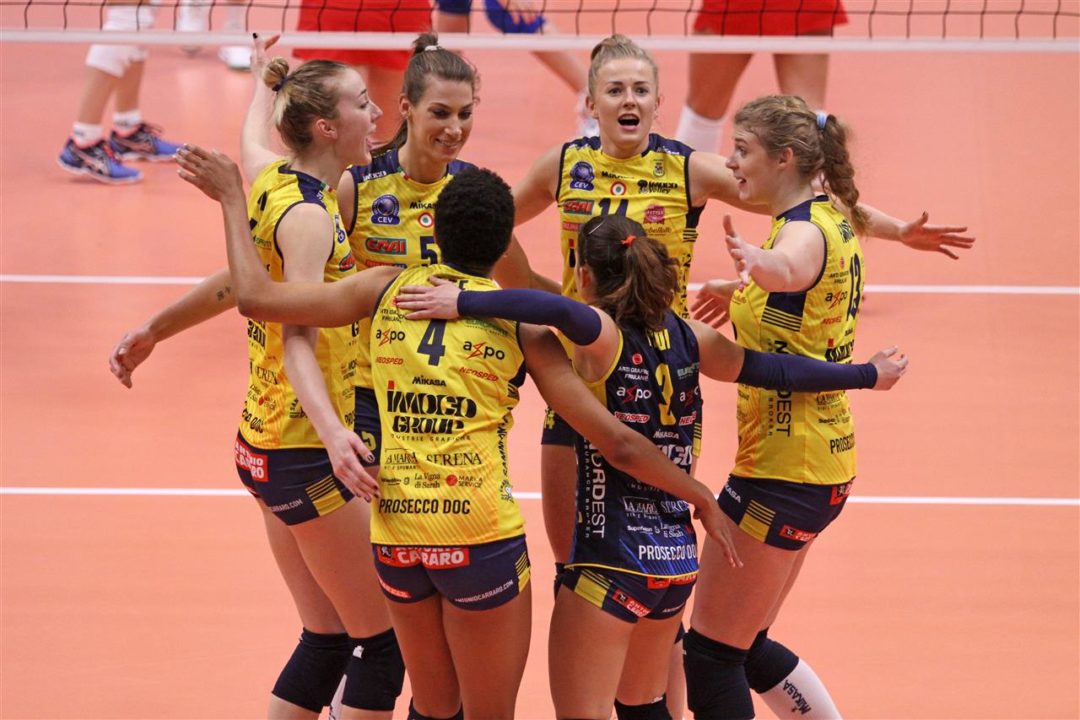 Following the fifth leg in the fourth round of the 2018 Women's Champions League, Italy's Imoco Volley Conegliano and Russia's Dinamo Kazan have secured their place in the Playoffs 6.  Current Photo via CEV

Following the fifth leg in the fourth round of the 2018 Women’s Champions League, Italy’s Imoco Volley Conegliano and Russia’s Dinamo Kazan have secured their place in the Playoffs 6.

The top-6 teams from the fourth round advance to the next stage of the competition with the winners of each pool moving on along with the top-two second place teams. Imoco and Kazan each secured their place in the Playoffs as they have remained unbeaten in the fourth round of the competition, guaranteeing no one in their pools will catch up with them with one match left in the round.

“We played very well tonight. We had the situation under control. It is true that our blocking skills were not so excellent at the beginning, but we made a little improvement already before the end of the opening set. We were very strong in attacking and serving all the time. We are very happy with our straight-set victory, especially after our loss in the Italian Cup finals at Igor Gorgonzola NOVARA last Sunday,” said Joana Wolosz of Imoco.

For Kazan, their four-set 3-1, (24-26, 25-16, 25-23, 25-14) win was a comeback over Chemik Police after dropping the first set in a tight battle. Irina Koroleva and Natalya Mammadova each led the Russia team to victory with 17 points each while Irina Voronkova and Elitsa Vasileva posted 16 and 12 points, respectively.

Imoco will take on fell Italian leaguers Igor Gorgonzola Novara, who took down Imoco in the Italian Cup last week. While the Italians have a tough battle ahead of them, Kazan will take on Maritza Plovdiv who has not won a match in the fourth round.