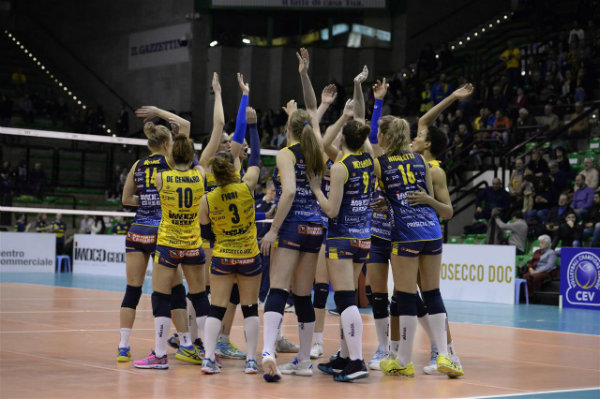 The Playoffs 6 of the 2018 CEV Women's Champions League has begun with two Italian teams having won their matches in the first leg. Current Photo via CEV

The Playoffs 6 of the 2018 CEV Women’s Champions League has begun with two Italian teams having won their matches in the first leg.

Igor Gorgonzola Novara started off their match on a high note, winning the first set 25-21 but they then fell hard in the second and third sets to fall behind 1-2 in the match. They picked things back up in the fourth set to force a fifth set before winning the match 15-10. The match saw an unfortunate injury on Galatasaray SK Istanbul’s side of the net, as Tatiana Koshleva went down with what looks like a knee injury in the second set of the match. Paola Ogechi Egonu led the scoring with 26 points while Francesca Piccinini and Celeste Plak each posted 11.

Imoco Volley Conegliano rolled through Dinamo Kazan in a three-set sweep to claim the first leg on their home court. Samanta Fabris led the team’s output with 18 points while Samantha Estephania Guadalupe Bricio Ramos posted another 10 in the win. The loss for Kazan comes as a shock to the team, as they ran through their pool play matches to a 6-0 record entering the Playoffs 6.

VakifBank Istanbul quickly ran through their match against Volero Zurich with a three-set sweep led by Zhu Ting and Lonneke Sloetjes with 14 points each. The defending champions had no troubles in the first set but the Swiss team found back in the second and third sets to make things closer but were unable to find their groove against the strong Turkish team.