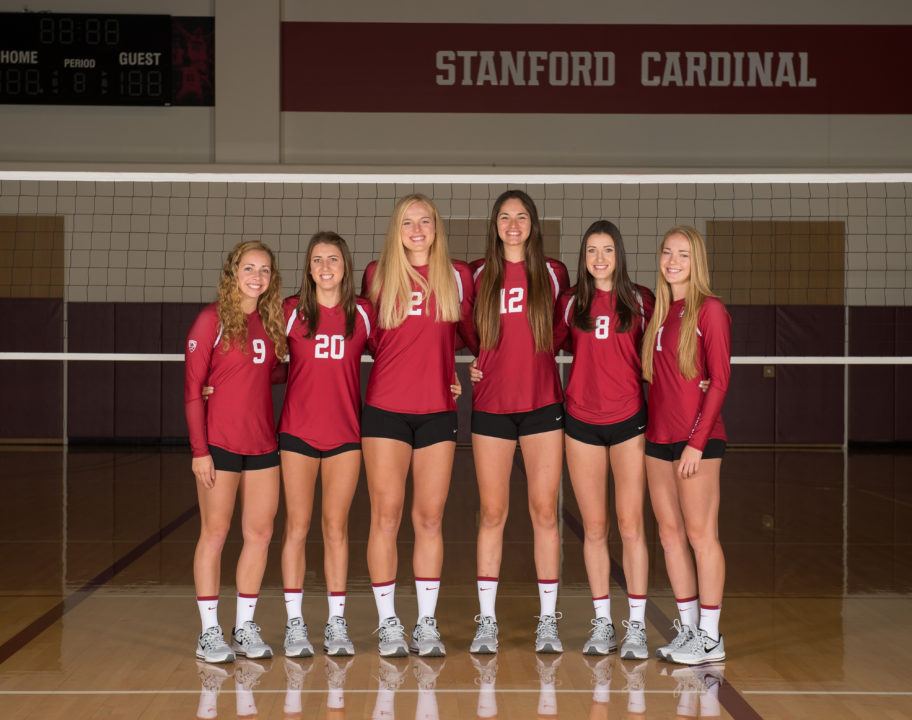 All-American outside hitter Kathryn Plummer from Stanford shares about the first week back on "The Farm", off-court bonding and adjusting to new teammates and a new coaching staff. Current Photo via Stanford Athletics

All-American outside hitter Kathryn Plummer from Stanford shares about the first week back on “The Farm”, off-court bonding and adjusting to new teammates and a new coaching staff.

Plummer is back after a rookie campaign that saw her garner AVCA first team All-America honors as well as AVCA and Pac-12 Freshman of the Year accolades. The All-Pac 12 Conference and All-Pac-12 Freshman Team selection racked up a team-leading 11 double-doubles, while averaging a team-leading 3.34 kills, 1.74 digs and 0.88 blocks per set. The Aliso Viejo, California, native accounted for 3.97 points per set and added 20 aces to the team’s tallies.  She was one of four Stanford players selected to the Preseason All-Pac-12 team.

Stanford returns five starters from the 2016 team, which won the National Championship, tying the Cardinal with Penn State for the most women’s volleyball titles of all time with seven. The Cardinal went 27-7 en route to the title and the No. 1 spot in the final AVCA poll as well as a second place finish in Pac-12 play. In addition to Plummer, Merete Lutz and Audriana Fitzmorris are back after claiming All-America honors in 2016. The team also added four freshmen to its ranks.

The Cardinal, which are in their first season under Kevin Hambly after the retirement of Hall of Fame Coach John Dunning, kick off their 2017 campaign against Long Beach State, Iowa and Wright State at the Long Beach State tournament, August 25-26.

Get Plummer’s take on preseason camp, her new teammates and more below.

The last week on The Farm has been full of some pretty exciting stuff. On Monday we all moved into the dorms and it was really fun to see everyone after so long. It was also great to interact with some of the freshmen for the first time. This group of girls is extremely funny and always knows how to have a good time, and I think that the new additions to our team will fit right in to the culture that we have built here at Stanford.

Later that day we met with our compliance staff and coaches and discussed the scheduling and rules of our upcoming season. We even played a game of Kahoot to refresh our knowledge of all the important guidelines that keep us eligible to play the sport that we all love. We ended the day with a dinner at Coach Hambly’s house where we all got to know the freshmen and the new staff members even better.

On Tuesday we had our first day of competition. It started off with going to the weight room bright and early. Everyone performed well and the competitive environment was just beginning. We immediately went to our first pass and serve of preseason. Coming off a little break from indoor, we all looked sharp. Passers were working on the fundamentals, where the setters and the middles were focusing more on footwork in regards to their specific positions. Then we had lunch at Jimmy V’s, which is the restaurant on campus where almost all the athletes go before or after practice and games. There have been some of the best memories formed here during pregame meals and I can’t wait to form more. Next, we went to our second practice of the day where there was a lot more competitive play. We are all embracing and excelling in the new system that we are running as a program, and it is really exciting to see. I just can’t wait for another team to be across the net come late August.

The next couple of days looked pretty similar to Tuesday, but Friday we had an off-day. We all took full advantage of this and went to the pool on campus. It is so cool to make relationships with my teammates off the court and it starts with little “getaways” like this. These are the moments that I really enjoy, getting to know my team outside of the sport has made my experience on The Farm that much better.

At the beginning of the second week of preseason, we took a drive down to Santa Cruz for a team bonding overnight trip. We first practiced at Cabrillo College, which was really nice. Then we went to dinner as a team and just talked at the table. Later that night, we built our own bonfire, thanks to freshman Sidney Wilson, and made s’mores and listened to music for hours. The next morning some of us relaxed on the beach, but most stayed in all day and played games like Scrabble, Pictionary, and Family. Overall the trip was really fun and enjoyable.

Being a sophomore with experience gives me a unique situation. I have the opportunity to help lead this team to another title, and possibly more than one. I’m excited for the chance to embrace the freshmen with open arms and show them the ropes of Stanford volleyball. Coming in, I know it can be overwhelming and sometimes scary, but I know that it is also really exciting. There have already been so many changes this season, but I am looking forward to being a part of this journey with my teammates. The transition with the new coaching staff and new players has been seamless and I know that we have the chance to do something great again. This program is special and I hope that I can help to keep it that way for as long as possible.

Looking forward to seeing everyone in Maples!!!

Great words “K” You and your teammate s will go far,strive for greatness everything else will fall in place!