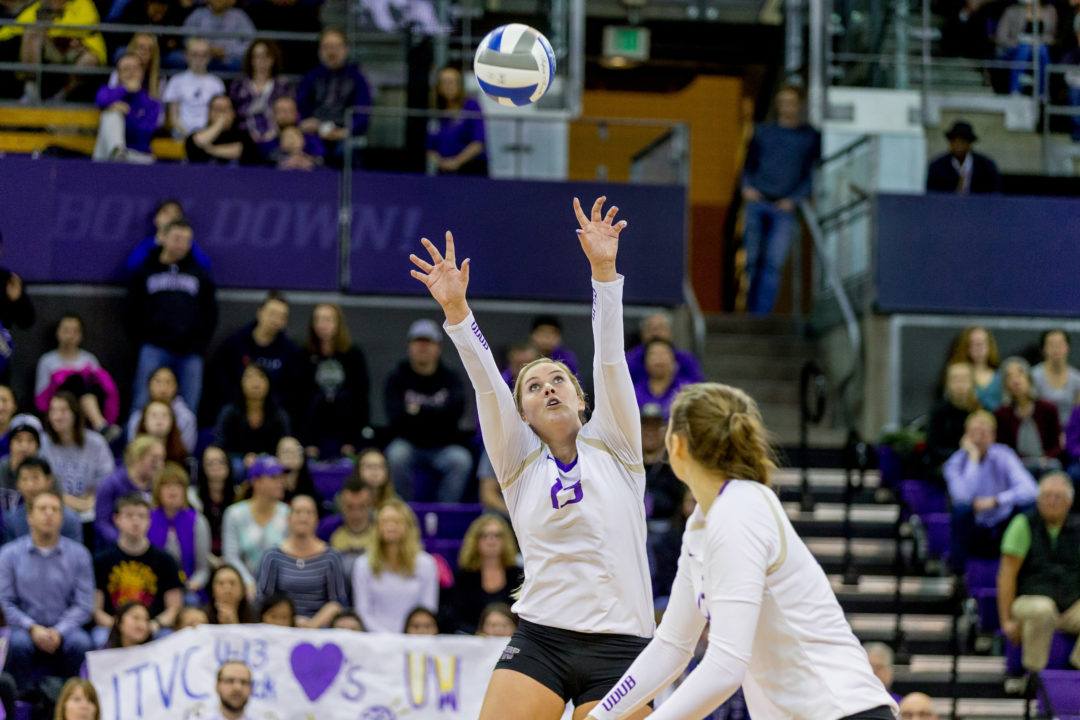 Washington setter Bailey Tanner, an All-Pac-12 Conference honoree,  sat down and answered questions about her team, her offseason, preseason practice and even naps.  Archive Photo via Washington Athletics

Washington setter Bailey Tanner, an All-Pac-12 Conference honoree,  sat down and answered questions about her team, her offseason, preseason practice and even naps.

The No. 3 Huskies, which finished 29-5, won their second straight Pac-12 championship and reached the Elite Eight in 2016, return 12 players, including All-Americans and All-Pac 12 selections Crissy Jones and Courtney Schwan.

The stacked roster, plus a trio of freshman and Oklahoma transfer Marion Hazelwood,  kicks off its 2017 season at home vs. Pittsburgh, Saint Mary’s and Creighton.

Tanner’s inside look at the 2017 Huskies is below. Questions provided by Washington sports information director Michael Bruscas.

Walk us through your daily routine during preseason.

Bailey Tanner: I like to stay in a pretty solid routine. A 5:45 wake-up, and then if that doesn’t work I set a 5:50 just in case. I leave my house by like six. I have these bars I like to eat and drink some water, and then I get taped and get treatment and get ready for morning practice. That lasts three hours right now. Morning practices are mostly serving and passing, not a ton of jumping or hitting. More honing in on little skills and not the super physical ones, and then we just get ready to grind in the afternoon.

After that we get a little break, maybe watch some film, meet with the coaches, maybe take a little napsky, then we have lunch at Conibear (Shellhouse). After that, more treatment, I’m pretty old so it takes me a while (laughs). Get taped again, get warmed up, and then setter tutor starts at 2:30 so I’m out on the court at 2:10 or so. Get after it until 5:30 or 6:00, and then wind down, that’s pretty much my day. I don’t do much after practice. I just wing it with dinner. I’m not the best sleeper, but I like to be in bed by 10 or 10:30 but it can take me a couple hours to fall asleep.

Do you take your naps in the lockerroom or somewhere special?

Bailey Tanner: I have a little secret room I don’t tell people about. Once I leave (Washington), I’ll tell people. Unless I have a two hour block I’m going to wake up grumpy, so I usually just close my eyes for a bit and don’t fall asleep.

Did you get to spend some time at home in San Clemente, California, this summer?

Bailey Tanner: I got two pretty good breaks at home. Lots of time with my dog, lots of beachin’ it. The water was super warm and super shark-y. I was in the water probably more than I should’ve been. It was my goal to see a shark but I didn’t. I’d be in the water until 10 o’clock at night and the next morning the beaches would be closed because of shark sightings and I was like ‘Oh, boy!’

With two full practices in the books what are your early impressions?

Bailey Tanner: Day one of this preseason is the cleanest that it’s been the whole time I’ve been in the program. I was super impressed with the whole team and how everyone was playing. I thought the freshmen were bringing it. Marion (Hazelwood’s) new and she’s getting after it. I was just stoked with how everyone was meshing together. I think it’s going to be a great year; I’m really excited.

The first rankings came out this week and you guys are third to start the year. Any thoughts on having those kind of expectations?

Bailey Tanner: Actually it’s higher than I thought we would be, but I’m cool with it. I don’t really care about rankings right now, we’re trying to finish (number) one at the end. I try not to focus too much on rankings, but it’s cool to see that people think we can cause some problems.

With such a big senior class of seven players, how do leadership duties get sorted out or is it by committee?

Bailey Tanner: It’s hard to say right now. I think that as a senior class we’re all really different. We all lead in different ways. Crissy brings a lot of super fired-up and loud energy, and I’m a little more steady, and I think the team needs both at certain times. One of the things about being a senior is that we really need to say what needs to be said and not worry about hurting people’s feelings. Information is information, it’s not good or bad, it’s just how it needs to be.

This is the largest roster the team has had in years, with a lot of experience. How do you think the depth will help this season?

Bailey Tanner: I think depth is a big deal for us. We haven’t had that lately especially in the middle, and last year we only had two setters. It’s good to have more people competing for each spot, to know that someone is always pushing you. We could play a lot of different lineups. Whatever helps the team, everyone just wants to do what we have to do for the team.