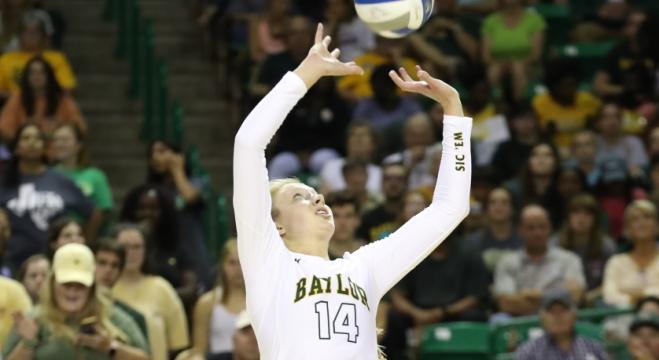 A four-year letterwinner at Des Moines Valley High School, freshman setter Hannah Lockin returned to her home state and led the #23 Baylor Bears to its first straight-set victory over #21 Iowa State in Ames since 2001. Archive

Lockin registered her seventh double-double of the season (37 assists, 11 digs), pacing an offense that featured 14 kills from sophomore middle Shelly Fanning, who hit at a .500 clip, plus 10 kills from freshman outside Yossiana Pressley.

“Such great maturity from us tonight. We had great composure,” said Baylor head coach Ryan McGuyre. “I just felt like we were in control the entire night. What a beautiful match from Hannah Lockin. For us to side out at 72 percent – she’s one of the best setters in the country right now as a freshman to have us hitting offensively well against a very good Iowa State team.”

For Iowa State, senior setter Monique Harris scored a double-double (17 assists, 10 digs) and junior outside Jess Schaben notched 10 kills. As a team, the Cyclones hit .113 on the night.

In first frame, the Bears hit .429 as a team while the Cyclones committed eight hitting errors and the set ended 25-19 on a kill by Baylor’s senior outside Katie Staiger.

Both teams stayed close in the second until a five-point Baylor run gave them an 18-13 edge. A kill by Baylor senior Camryn Freiberg put her team at set point and the Bears won 25-18 after an Iowa State error.

Set three was all Baylor from start to finish and a junior outside Aniah Philo ace gave the Bears the 25-14 victory and their first sweep in Ames in 16 years.

Iowa State will attempt to regroup on Saturday in another home contest against Kansas State, while Baylor travels to West Virginia for their next Big 12 road test.

No. 20 Iowa State Falls to Baylor

The Cyclone offense struggled, getting held to a season-low .113 hitting percentage. ISU was led by 10 kills and eight digs from Jess Schaben. Hali Hillegas led the backrow with 15 digs, while Monique Harris got a double-double of 17 assists and 10 digs.

Set One: Baylor 25 Iowa State 19
The Cyclone defense struggled to slow down the Baylor attack, as the Bears hit .429 en route to building up a 20-13 advantage. The ISU offense struggled to compound the issues, as the Cyclones committed eight attack errors, only one caused by the Baylor block. The Bears got to set point at 24-18, and moved ahead 1-0 when Katie Staiger got a kill at 25-19.

Set Two: Baylor 25 Iowa State 20
Both teams were strong defensively, but neither team could find the breathing room to get ahead in the first half of the set. The breakthrough came by Baylor, as they went on 5-0 run to pull ahead 18-13. Staiger’s service error that ended the run, gave ISU an avenue back in the set, cutting the Bears’ advantage to two at 18-16, but Baylor pushed it back to five at 21-16 and did not look back. Set point arrived at 24-18 on a Camryn Freiberg kill and was put away at 25-20 when Monique Harris’ serve sailed long.

Set Three: Baylor 25 Iowa State 14
The Baylor offense kept rolling in the third, with Shelly Fanning guiding the Bears to an 8-4 advantage. The Cyclone attack could not counter, as ISU hit just .077 for the set as Baylor would build its lead into double figures. Match point came up at 24-14, and was put away on the first try with an ace from Aniah Philo at 25-14 Bears.

Up Next
Iowa State will be off this weekend, but will be back in action at Hilton Coliseum next Wednesday against Kansas State. First serve between the Cyclones and Wildcats will be at 6:30 p.m. with Cyclones.TV broadcasting the match.

Redshirt sophomore Shelly Fanning led the charge as she posted a match-high 14 kills on a .500 attack effort for her 14th double figure match of the season. Freshman Yossiana Pressley contributed 10 kills, and senior Camryn Freiberg added eight in the win.

The Bears jumped out to a 15-10 lead at the media timeout after back-to-back kills from Fanning. BU continued to hold a five-point advantage after an Aniah Philo kill to force an Iowa State timeout. Katie Staiger closed out the opening set with a kill for the 25-19 win.

Set two saw nine ties and three lead changes as Baylor took the narrow 15-13 lead at the media timeout. Three straight kills from Fanning stretched the lead, 18-13, and helped the Bears jump out to the 2-0 lead.

In set three, Baylor continued to step on the gas pedal as it roared out to an 8-4 lead behind a Philo and Freiberg block to force an ISU timeout. BU led by as much as 11 and closed out the match with an ace from Philo.

HIGHLIGHTS
• Shelly Fanning led all players with 14 kills on a .500 attack efficiency.
• The Bears held No. 20 Iowa State to a .113 hitting percentage. The Bears move to 5-0 when holding opponents to a .100-.199 attack effort.
• Hannah Lockin posted her seventh double-double of the season, logging 37 assists and 11 digs in front of her home state. Lockin is from Des Moines, Iowa.
• Baylor swept ISU on the road for the first time since Oct. 5, 2001.
• The Bears have now won back-to-back matches at Iowa State for the first time since the 2004-05 seasons.
• BU won its first match over a ranked opponent on the road since Nov. 12, 2011 at No. 25 Oklahoma.

STAT OF THE MATCH
16 – the amount of years since Baylor has swept Iowa State in Ames.

TOP QUOTE
“Such great maturity from us tonight. We had great composure. I just felt like we were in control the entire night. What a beautiful match from Hannah Lockin. For us to side out at 72 percent – she’s one of the best setters in the country right now as a freshman to have us hitting offensively well against a very good Iowa State team. Our two freshmen did a phenomenal job. Last year, we don’t win if Katie hits negative. This year, we’re able to come at teams in so many different ways and options. I thought my staff did a phenomenal job preparing for this match. We weren’t surprised on anything, and the girls made plays today.” -head coach Ryan McGuyre

WHAT’S NEXT
The Bears head home to host West Virginia as a part of Scout Day Saturday afternoon at 2 p.m. CT at the Ferrell Center.