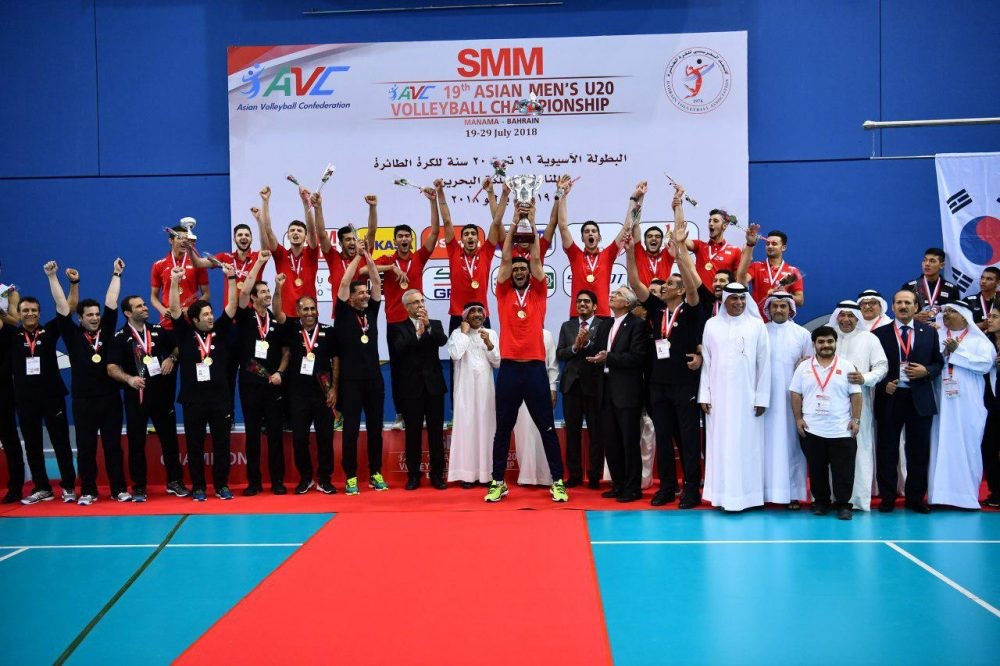 After 68 matches amongst 23 teams over eight days, the 19th Asian Men’s U20 Volleyball Championship of Bahrain finally came to an end. Iran, under the coaching of Behrouz Ataee and his technical staff, claimed the champion title.

The final match was between Iran and Korea. Iran pulled off a dramatic win in three sets (25-22, 25-14, 23-18). Fans from Korea living in Bahrain showed their loyalty and gave the hall an atmosphere that favored the Korean team, but this was not enough to beat Iran. The two teams faced each other earlier in the tournament with a similar outcome. In match 19, Iran defeated Korea in straight sets (25-22, 25-21, 25-19).

On the other hand, Iran had high motivation to defeat their rival, Korea, who had earned six champion titles from the previous rounds of the Men’s U20 Asian Volleyball championships. Iran had previously claimed five title crowns and were right behind the Korean team. Iran was excited for the opportunity to match the titles. Both champion and vice-champion teams earned an invitation to the world volleyball championship of Cairo for next year.

Dr. Ahmad Ziaee, president of the Iran volleyball federation, was present in the hall. Regarding the match, Ziaee said, “I have come here to visit the team, watch their high performance, thank them for their high-quality performances to reach to the final game, and give them congratulations. By the grace of the great God and their own effort, our team has achieved the ticket for the FIVB world Youth Men’s Volleyball Championship of 2019 of Cairo and defeated the powerful team of Korea.”

Both teams were neck and neck until 10 points. From mid-set, Iran went ahead and gradually added points, taking the set 25-22.

The second set started, and Iran’s defense and serving won them the set by a large margin at 25-14.

In the third set, the Iran players were motivated but playing tentatively. They had lost the third set to Thailand the day before (their only set loss in the tournament) and did not want to do the same in this match. As seen in the previous two sets, Iran served and blocked powerfully, and played an overall good game. Iran won the set 25-18 and claimed the championship title.

Iraq defeated China and ascended to the 4th rank.

Jordan made their first appearance in the tournament.

Thanks to the Bahrain Volleyball Association for their perfect hosting and organizing.

Also, I express my sincere thanks to Mr.Sheikh Ali the reputable president of Bahrain Volleyball association for their excellent organization.