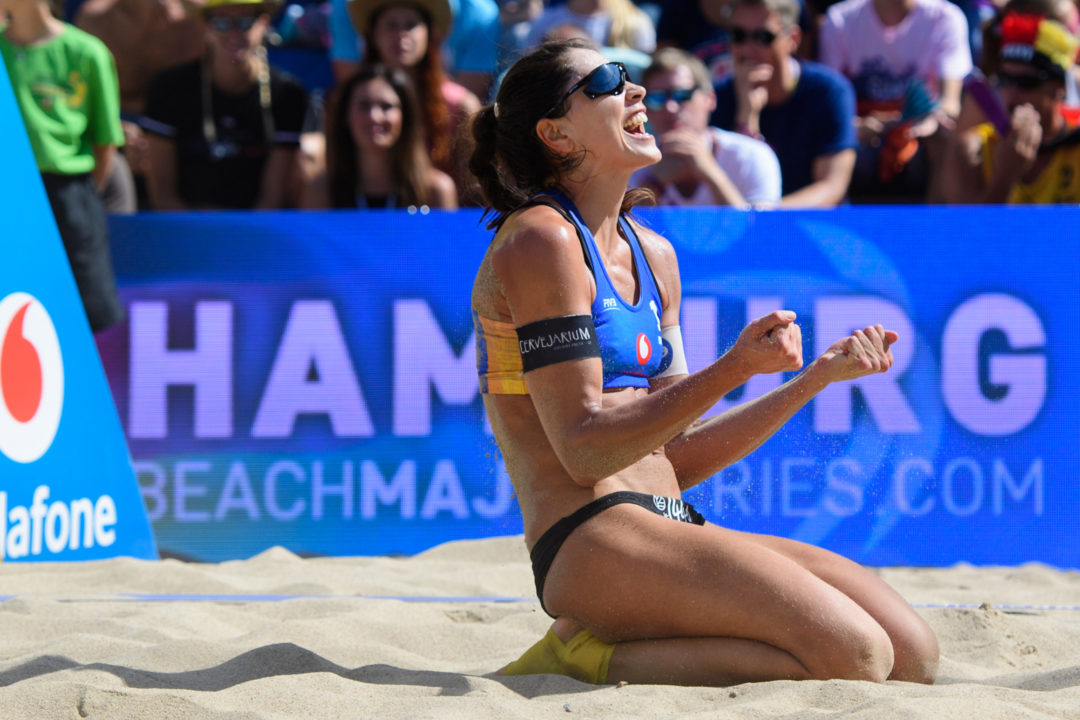 Brazil’s Maria Antonelli/Carol Solberg Salgado and Australia’s Mariafe Artacho del Solar/Taliqua Clancy are on to semifinals of the FIVB World Tour Finals by virtue of securing their respective pool titles on Saturday morning.

Maria Antonelli/Carol went 3-1 including a sweep of top seeded Germans Chantal Laboureur/Julia Sude on Saturday morning, to claim the Pool A title. The pair won the pool on tiebreakers over Canada’s Heather Bansley/Brandie Wilkerson on point ratio (1.0675 to 1.0438). The Brazilians won 174 points and lost 163, while the Canadians won 167 and lost 160.

“I think the key was to keep focused at all times, even in the bad moments, and stay together not matter what,” Carol said. “We helped each other a lot and kept believing until the end. We had our eyes wide open because we knew how good they were. We know our opponents will have to play another match, so we just take our time to rest and take advantage of it, but make sure we keep our focus.”

Pool B also was decided on tiebreakers with Artacho del Solar/Clancy edging fellow 3-1 team Agatha Bednarczuk/Eduarda ‘Duda’ Santos Lisboa of Brazil in points ratio (1.1538 to 1.0279). The seventh-seeded Aussies won 180 points and lost 156, while the Brazilians won 184 points and lost 179.

“We needed to start well otherwise we would have found ourselves catching up,” Artacho said. “We did a good job of staying patient through the first set. They had some really good rallies at the end, so we had to make sure we stay composed and have that belief and trust in each other. We’re going to enjoy the moment today and recover and reset and get ready for another tough match tomorrow. It’s bloody amazing. We’ve had some really tough matches and to come out on top in this tournament where we play the best in the world, it’s such a special feeling.”

“We just looked at each other and said we’re playing as a team just one sideout at a time and that’s what we did,” Hughes said after the win. “We had to win and we did our job out there. All we can do is just wait it out and hopefully the volleyball gods are on our side. Our goal is to keep making progress as a team so now I still want to be playing in this tournament so we’ll see.”

Hermannova/Slukova finished third in Pool B, edging out Canadians Melissa Humana-Paredes/Sarah Pavan on points ratio (1.0051 to 0.9808) as both finished 2-2.

The last two semifinal spots were decided in the quarterfinals later in the day, with both matches going to tiebreak. First up, Hermannova/Slukova claimed their spot with a 21-15, 17-21, 15-7 win over Bansley/Wilkerson. Agatha/Duda kept hope alive for their second straight FIVB World Tour Finals medal by rallying for a 12-21, 21-14, 15-9 win over Laboureur/Sude.

Only one Brazilian pair will end up with a shot at the gold in 2018 as Agatha/Duda will be pitted against Maria Antonelli/Carol in the second semifinal. Second seeded Hermannova/Slukova will face Artacho del Solar/Clancy in the first match of the day on Sunday.

The Czechs boast a 2-0 FIVB series lead over the Aussies, while Agatha/Duda are 1-0 in head to head FIVB matches against Maria Antonelli/Carol. 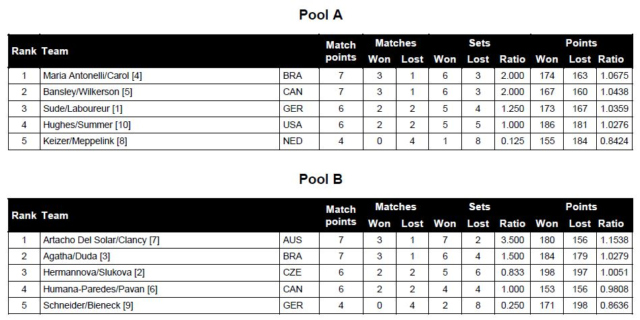