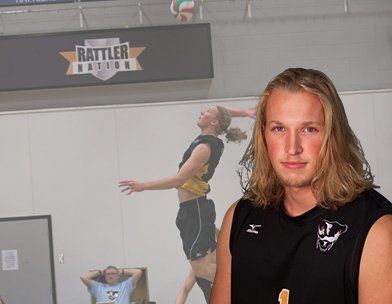 Two-time Canadian Collegiate Athletic Association Player of the Year Isak Helland-Hansen has signed on to play professionally for the Draisma Dynamo in the Netherlands. Archive Photo via Medicine Hat Athletics

Two-time Canadian Collegiate Athletic Association Player of the Year Isak Helland-Hansen has signed on to play professionally for the Draisma Dynamo in the Netherlands.

“It is pretty exciting,” Helland-Hansen told Medicine Hat News. “It is something that has been in the back of my mind for a while. I’ve always wanted to try and get to that level, it’s nice to have it.”

Helland-Hansen led the Rattlers to a bronze medal at the CCAA national tournament in March in London, Ontario. The junior outside hitter and two-time CCAA All-Canadian team selection, helped his team to a 19-5 record with 202 kills, 125 digs and 37 aces. In addition to CCAA Player of the Year honors, Helland-Hansen earned Alberta Colleges Athletic Conference overall Male Athlete of the Year and Rattlers’ male athlete of the year accolades as well as second team CCAA all-star honors.

In his career at Medicine Hat, Helland-Hansen set career marks of 614 kills and 122 aces.

He joins Fraser Smith as another Rattler in the Dutch pro league.