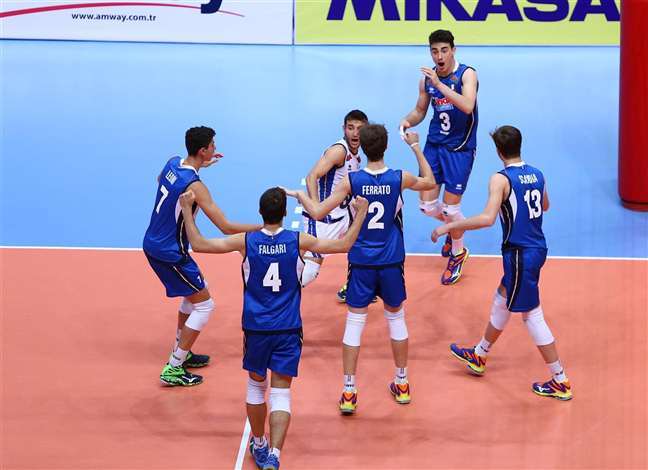 The Italians edged Belgium for the first ever CEV U17 European Championship in a back-and-forth five-set match Tuesday.  Current Photo via CEV

The Italians edged Belgium for the first ever CEV U17 European Championship in a back-and-forth five-set match at Konya Municipality Sports and Congress Center on Tuesday.

Turkey grabbed the bronze medal with a sweep of Bulgaria in the third place match.

Errors were the difference in the match as Italy edged Belgium by just nine points in a five-set championship victory. The Belgians gave away 27 points on errors, while Italy only committed 19 miscues in the match.

The rest of the statistics were fairly even with Belgium outblocking Italy 16-15, while Italy managed two more kills (65-63). Both teams served up three aces.

Italy led Set 1 from start to finish in a 25-17 victory. Italy led for much of the first half of Set 2 as well, but Belgium rallied from down five to steal away the 25-21 victory. Belgium overcame a six-point deficit in Set 3 to grab a 25-23 Set 3 victory. Italy held a slim advantage for much of a 26-24 Set 4 win, which it took on its third set point chance. Belgium boasted an 8-6 edge at the changeover in the decisive fifth set, only to set it slip away as Italy snagged the title with a final 9-2 run.

“It’s obviously a huge honour to have coached this team especially because the lads never let up despite the numerous difficulties we faced,” Italian coach Bruno Morganti said. “That was the case again today after we lost the third set despite at one stage having a big lead – the lads showed great heart and courage to bounce back. For now we will enjoy being European champions but this team can go a long way because of its physical capabilities. We have some exciting tall prospects coming through and we all know that to be successful at international level you need a powerful side.”

“I told the guys it’s normal to be disappointed, but they played a great game and I’m more than satisfied with their progression,” Belgian coach Wim De Boeck said. “Now it’s over but I’m sure during the night I’ll think ‘oh there was a chance’.”

Turkey never trailed by more than two in its sweep of Bulgaria for the bronze medal. The home side managed a 49 percent kill efficiency in the match, while also winning the block (12-7) and the service battle (6-4).

“Our goal was to be the champion but we are happy to finish the tournament with a medal anyway,” Turkish coach Huseyin Duzceler said. “We can play much better than this and my players are going to prove it in the future. I am proud of my players and staff.”

The Turkish cruised to a 25-14 opening set win, then dominated late in a 25-20 Set 2 victory. Bulgaria controlled the first half of Set 3 only to see Turkey seize a three-point edge. Bulgaria did stave off two Turkish match-point chances, before succumbing in a 26-24 score.

Bulgaria hit at a 41 percent kill efficiency behind a balanced attack featuring four players with five of more kills, but it was not enough to overcome 23 miscues and the Turkish attack.

“The crowd was perfect and it was good for us,” Bulgarian coach Dragan Ivanov said. “It was a great experience to play in that kind of atmosphere. We didn’t concentrate enough at the beginning. We calmed ourselves in the second half of the second set, but it was too late. Our team can play better.”

Kaan Gurbuz paced the Turkish with 16 points, all on kills, while Mirza Lagumdzija added 12 points, with 10 kills and two blocks. Ahmet Tumer registered nine points, including a team-best five blocks.