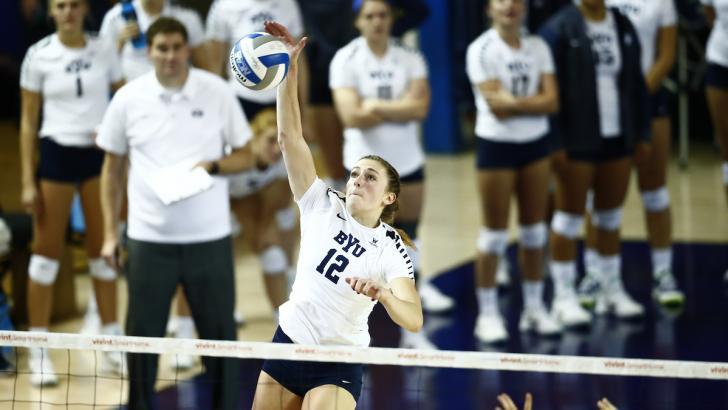 BYU junior outside Veronica Jones-Perry recorded a career-high 34 kills as the Cougars stormed back from a two-set deficit to defeat Loyola-Marymount in five sets. Current Photo via BYU Athletics

In a match where junior outside Veronica Jones-Perry recorded a career-best 34 kills, the #8 BYU Cougars rallied from a two-set deficit to defeat the Loyola-Marymount Lions in a five-set thriller.

In set one, Loyola-Marymount hit at a .520 clip and won 25-21 despite Jones-Perry registering 11 kills in that frame alone. In the second, LMU continued hitting well, this time at a .462 percentage, on their way to a 25-22 set victory.

After the intermission, BYU came out strong, starting the comeback with a decisive 25-18 victory then following it up with an even more convincing 25-12 win in the fourth frame.

BYU scored the first four points of the tiebreaker set and never trailed by more than two on their way to a 15-11 win, with the match ending on Jones-Perry’s fourth kill of the set and 34th of the contest.

The tilt was LMU’s annual Dig Pink match, with proceeds going to the Side-Out Foundation. The Lions play Pacific on Thursday, while the Cougars return home to play #22 San Diego on Friday.

More Heartbreak At The Hands Of #8 BYU

For The Second Straight Year, LMU Led 2-0 Only To Have BYU Storm Back To Win The Match.

Saturday’s match, played in Gersten Pavilion, was also the second straight match in which LMU took the first two sets of the match only to have BYU storm back to win in five. The previous instance closed out a 2016 season in which LMU went 0-6 in five-set matches. Since 2010, nine of LMU’s 14 matches against BYU have gone five sets, and LMU is 1-8 in the nine. LMU has led either 2-0 or 2-1 in five of the eight setbacks.

LMU, which hit .520 in the first set, and .462 in the second, finished the match hitting .246. Sierra Bartley had 14 kills on 24 swings while hitting .417, while Megan Rice had 11 kills on 21 attacks to post a .381 hitting percentage. The Lions served the ball well on Saturday, notching 11 aces behind four from Meredith Teague and three more from Rice. Teague also accumulated seven kills on 12 errorless attacks (.583), and managed a block solo and four block assists to help guide LMU to 12 team blocks.

“Meredith was really steady for us,” head coach Aaron Mansfield said. “She not only had a really good serving match, but she did a great job dialing into the scouting report from the blocking stand point. We found her enough offensively to balance us out, and she took some really good swings. She has been moving around between right side and middle, and she has taken it in stride.”

Veronica Jones-Perry had a career match in the victory for BYU, logging a career-best 34 kills on 59 attacks for a .441 hitting percentage. Jones-Perry served up three aces, recorded six digs, and managed four block assists to lead the way for BYU. The Cougars finished the match with 14 blocks, including a solo and nine block assists from Cosy Burnett. On the attack, Burnett managed seven kills while hitting .312.

Lyndie Haddock dished out 50 assists for BYU as the Cougars hit .315. Setters Jessie Prichard and Tess Reid finished with 27 and 26 for the Lions, respectively.

Despite BYU hitting for .300+ clips in the first two sets, LMU came out victorious after stringing together a strong attack and a great serving game. The Lions served up six aces in the opener, including three from, Rice and posted four more in the second set. The aces stalled out in the third, and BYU ran away with the fourth set after hitting .550 and holding LMU to a -.040 clip behind five Cougar blocks.

Now knotted at two sets apiece, the two teams found themselves in a race to 15. BYU came out strong, winning the first four points, capped by a pair of Burnett kills. LMU would inch to within two points at 7-5, and would stay within two all the way to 11-9, but BYU won three straight from there, earning match-point at 14-9 following Jones-Perry’s fourth kill of the set, and her final tally of the match. LMU did manage to win the next two points, but Haddock set Burnett on the ensuing play, and Burnett found the floor to seal the comeback victory.

LMU will look to get back on track next week when it travels to Pacific for a Thursday match at 7 p.m.

Jones-Perry led the Cougars with her career-high 34 kills on a .441 clip to go with three aces and six digs. Her 34 kills were most all-time in a match in BYU rally-scoring era history. Mary Lake contributed 16 digs and Cosy Burnett had 10 blocks. Lyndie Haddock collected 50 assists while McKenna Miller added 12 kills in the win.

Loyola Marymount jumped out to a 5-1 lead against BYU in the first set after back-to-back-to-back service aces. Jones-Perry responded for the Cougars with four-straight kills on four attempts to even the score at 5-5. The Lions pushed their way ahead to a four-point lead at 13-9 following a 4-1 run. Loyola Marymount stayed ahead at 19-13 after strong offensive play and eventually won the set 25-21 on a kill.

The Cougars went up 5-1 in the third set after consecutive blocks. A kill from Lacy Haddock extended the lead to seven at 12-5. Loyola Marymount came back within three, down 13-9, but another pair of Jones-Perry kills helped BYU go up 18-10 after a 4-0 run. Three-straight points from the Lions brought them back within six, down 23-17, forcing Olmstead to take a timeout. The Cougars then won the set 25-18 on a Loyola Marymount attack error.

A pair of Lyndie Haddock and Burnett bocks gave BYU an 8-2 start to the fourth set. Three more blocks put the Cougars up by double digits at 13-3. The Lions responded with a 5-1 run to get within six, trailing 15-9. A Lacy Haddock kill then re-extended the advantage to 10 at 20-10. A Lyndie Haddock dump kill gave BYU the 25-12 set win, sending the match to the decisive fifth set.

The Cougars return home to the Smith Fieldhouse next, facing No. 18 San Diego Friday, Oct. 27, at 7 p.m. MDT. The match will be televised live nationally on BYUtv and simulcast on BYU Radio – Sirius XM 143. Links to a video stream and live stats can be found on the BYU women’s volleyball schedule page.