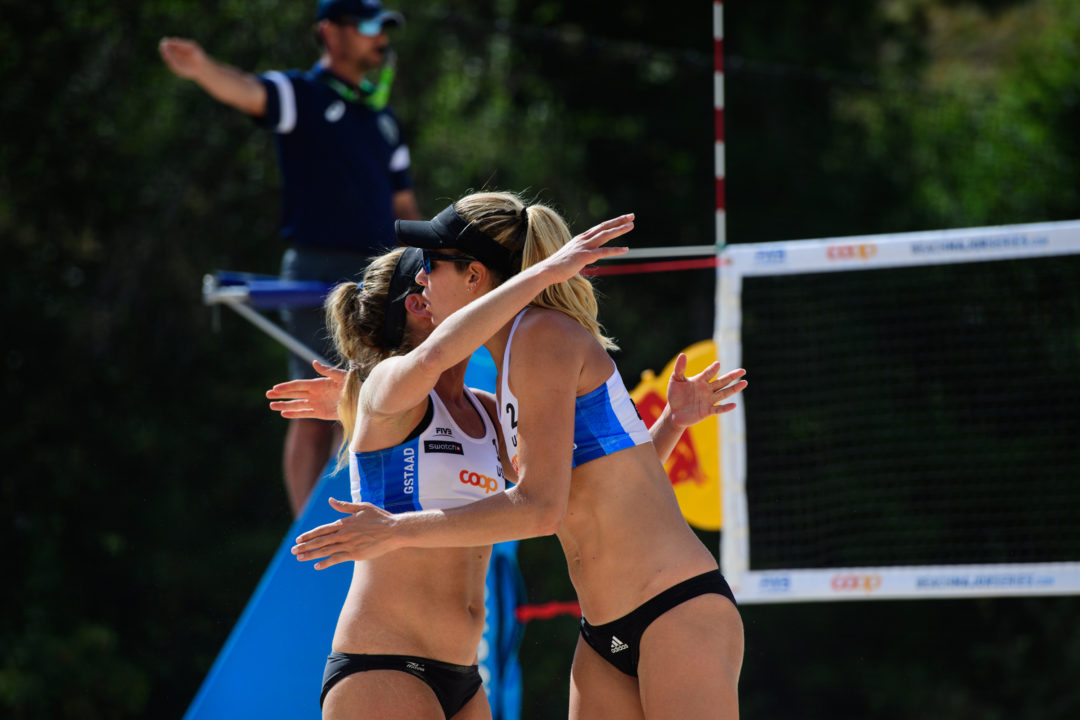 The race for the women's Gstaad Major title is down to eight teams, including Americans Alix Klineman/April Ross and Kelley Larsen/Emily Stockman and two Canadian teams.  Current Photo via FIVB

The race for the women’s Gstaad Major title is down to eight teams, including Americans Alix Klineman/April Ross and Kelley Larsen/Emily Stockman.

As pool winners, both teams earned a free pass to the second elimination round on Friday. Klineman/Ross faced countrywomen Summer Ross/Sara Hughes and came out with a tiebreak victory (21-18, 16-21, 15-9).

Larsen/Stockman continued their dream run through Gstaad as the qualifiers rallied for a three-set win over sixth-seeded Brazilians Maria Antonelli/Carol Solberg Salgado. Larsen/Stockman dropped the opening set 23-21, but came back for the 26-24, 15-13 victory to move on to the quarterfinals.

No. 4 Taliqua Clancy/Mariafe Artacho del Solar fell to No. 7 Laboureur/Sude 21-16, 26-24 to mark the highest seed out of the competition thus far.

Five of the eight Round 2 matches went to tiebreak. Laboureur/Sude, Humana-Paredes/Pavan and Agatha/Duda were the exceptions. The Brazilians moved on due to an injury to foes Joy Stubbe/Marleen Van Iersel.

Summer Ross/Sara Hughes were one of eight teams to win in the first elimination round at the Gstaad Major.

All but one of the Round 1 matches were decided in straight sets, with the lone exception seeing Maria Antonelli/Carol edge past Spain’s Liliana Fernandez/Elsa Baquerizo 21-18, 16-21, 15-9.

The record for most gold medals at a single event (7), held by Brazil’s Emanuel Rego, remained safe for another year, as six- time Gstaad champion Kerri Walsh Jennings made an early exit from the tournament. No. 21 seed Walsh Jennings/Nicole Branaugh fell to defending champion and Laboureur/Sude of Germany 21-17, 22-20, to finish 17th, picking up $6,000 for their effort.

No. 8 seed Joana Heidrich/Anouk Verge-Depre were the highest seed to leave the competition in the first elimination round, falling to Stubbe/Van Iersel of the Netherlands 21-16, 21-11. 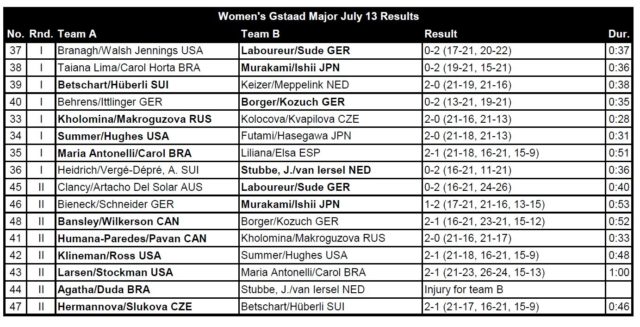