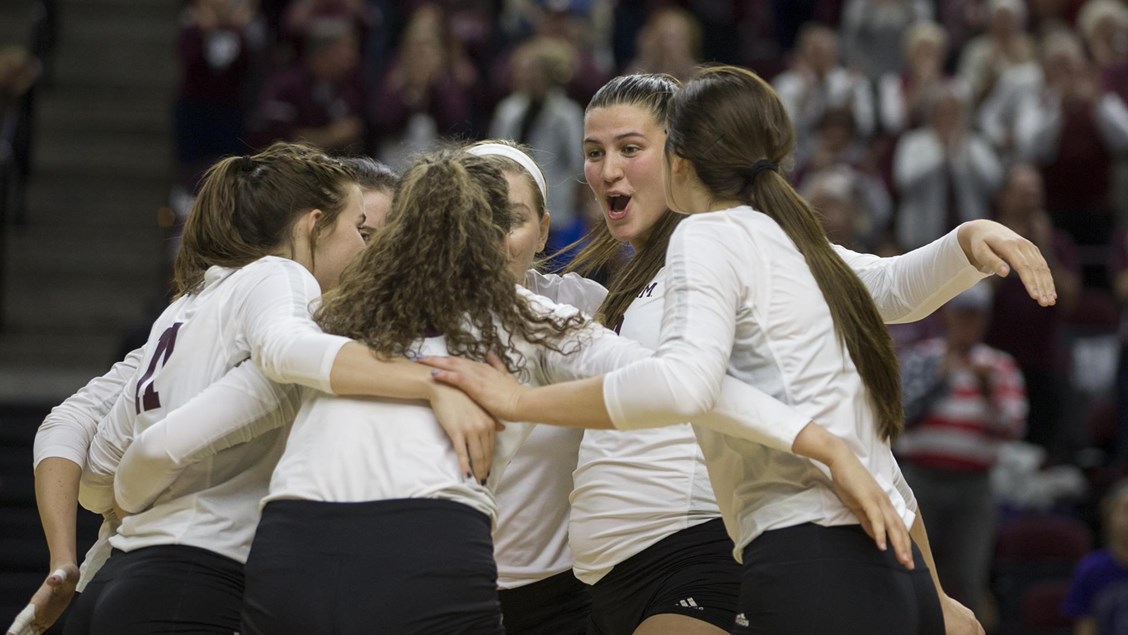 “I’m excited to see our team compete against a wide variety of opponents in the preseason,” said Kuhn, who begins her first season as head coach of the Aggies. “We will go up against a variety of teams with different styles of play, and they will challenge our focus night in and night out, and the SEC will be that way, too.”

Kuhn and the Aggies make their official debut on August 24 against the Ohio University Bobcats in the first match of a two-day tournament hosted by Ohio State in Columbus, Ohio. A&M also will take on Albany and then conclude the tournament in a feature match-up against the Buckeyes.

The Maroon and White will face two more teams from the powerful Big Ten Conference the following weekend as the Aggies head to State College, Pennsylvania, to take on Indiana and 2017 NCAA semifinalist and seven-time national champion Penn State at the Penn State Classic, August 31-Sept. 1. A&M, which narrowly fell to the Nittany Lions, 3-2, last season at Reed Arena, also will face Temple at the tournament.

After spending the first two weekends on the road, Kuhn and the Aggies make their first official appearance in front of the 12th Man on Thursday, Sept. 6, as they host the Texas A&M Invitational and face Pepperdine of the West Coast Conference on Thursday, Sept. 6 at 7 p.m. at Reed Arena. A&M will take on Nicholls State of the Southland Conference on Friday, Sept. 7 at 10 a.m., and then close out the tournament at 7 p.m. against Missouri State, the reigning Missouri Valley Conference regular season and tournament champion and a NCAA tournament participant last year.

“Getting to be at home that third weekend will be refreshing,” Kuhn said. “That is going to be a strong tournament for us, again with the different styles of play. Plus with it being at home, you know it will be high energy. Throughout the recruit ing season, the 12th Man is all I’ve heard about. Whether it is hearing from people who have played preseason matches or SEC matches here, everyone talks about the atmosphere. It is going to be special.”

A&M concludes the preconference schedule at the OU Nike Invitational in Norman, Oklahoma, Sept. 14-15, with the Aggies’ match against Northwestern State bookended by matches against the Sooners.

A&M kicks off its seventh season in the SEC with a two-match homestand against Arkansas (Sept. 19) and Georgia (Sept. 23).

“Being able to open conference play at home is going to be huge for us, and it will be nice since we will have been at home only one weekend during preconference,” Kuhn said. “The home energy and fresh vibe will be a good jump start for us, being back in front of the 12th Man. We’ll be looking forward to getting after it as we begin SEC play.”

The Aggies also will have home matches against Auburn (Oct. 12) and Tennessee (Oct. 19), as well as defending SEC co-champion Kentucky (Oct. 21), the preseason favorite to win the SEC according to a poll of the league’s head coaches. In addition, A&M will host Alabama on Oct. 26, as well as South Carolina (Nov. 9) and Ole Miss (Nov. 11), the winner of the 2017 National Invitational Volleyball Championship. The Aggies close out the 18-match SEC regular season and celebrate Senior Day against LSU on Friday, Nov. 23.

Season ticket renewals are currently underway, with tickets going on sale to the general public on Thursday, July 5.

The Aggies, who honed their skills by taking a 10-day training tour to Europe in May, report for fall preseason training on August 7.