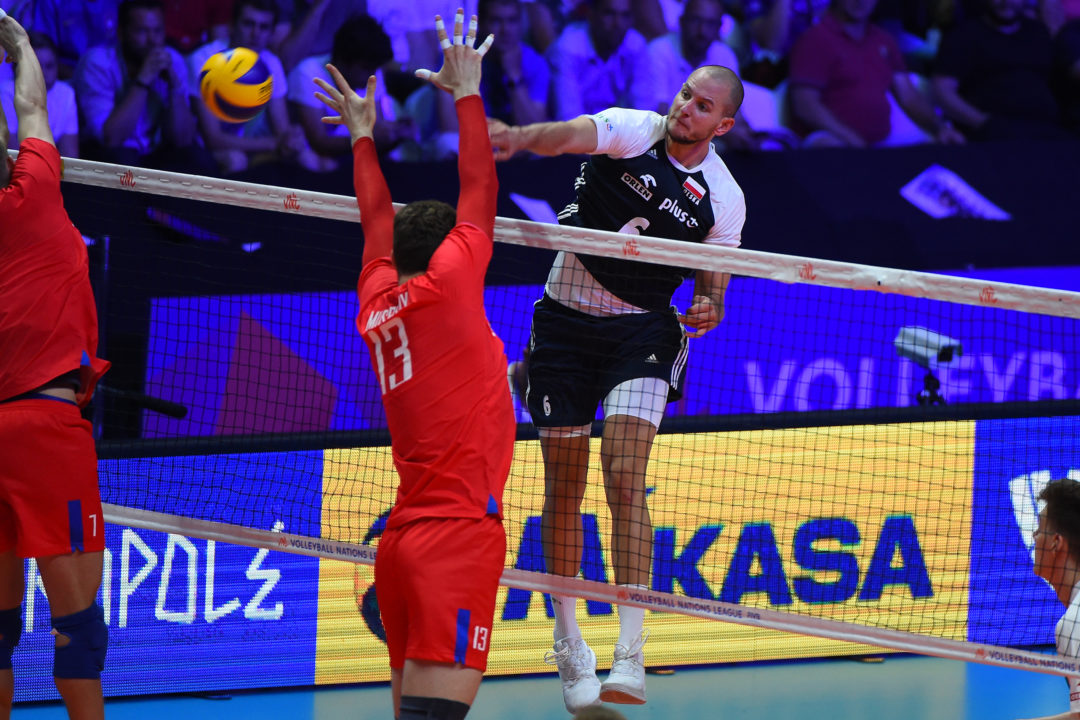 Bartosz Kurek led Poland with 23 points in a defeat to Russia in the first match of the #VNL Final Six. He has a relaxed attitude going into Thursday's match against the United States.  Current Photo via FIVB

Bartosz Kurek echoed the sentiment issued by Vital Heynen ahead of the Volleyball Nations League Final Six. Heynen stated that was, ” a miracle we even got promoted to (the) Final Six.” Poland looked overwhelmed by a Russian team who put some of their stars back onto the floor for the first time this tournament (Artem Volvich and Maxim Mikhailov).

Kurek got the start for Poland at opposite after only playing sparingly in the Preliminary Round. After battling a rash of injuries the past two seasons, there have been reservations as to whether or not he could produce against the toughest of competition. He certainly made a statement for his fitness in a 3-1 (25-18, 25-23, 22-25, 25-17) loss to Russia to start the  Final Six in Pool B. He was the shining star for Poland, finishing with 23 points on 22 kills and a block. Kurek also had a hitting success rate of 66.67%.

Poland falls to 0-1 in Pool B and must get a win against the United States on Thursday in order to remain in contention for the semifinals. Kurek did not seem too stressed about playing a team from the USA who would be playing all of its best available players.

“We have nothing to lose. We do not have to rebuild anything,” Kurek stated. “We are here because we qualified by playing a wide team. I treat our presence here as a success. In the match with the Americans, let’s just enjoy the game.”

He shares the attitude of his coach that it was quite an accomplishment to reach the Final Six playing with varied rosters each week of players who normally do not see time on the court. One has to wait until Thursday to see if this attitude will equate to a team playing free and lose, or a team that simply does not care.