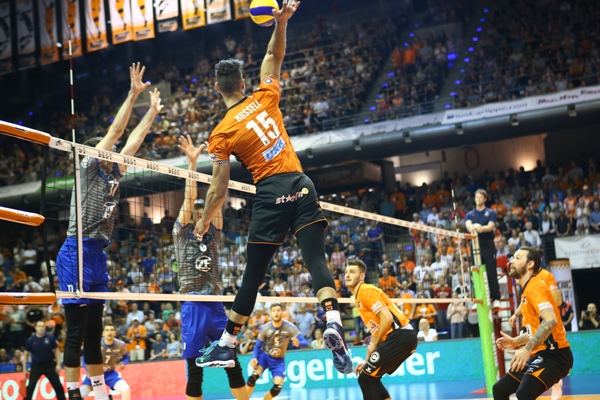 Kyle Russell speaks about winning the Bundesliga title with Berlin last season and his expectations for the upcoming year.  Current Photo via Berlin Recycling Volleys

The Berlin Recycling Volleys announced Kyle Russell would be staying with the club for another season back in July. VolleyMob was able to catch up with Rusell to hear about his experience in Berlin this past season when they won the German Bundesliga title, his expectations for the upcoming season, and how he has been spending his summer.

Berlin will have a heavy American influence, as four players from the United States will be on their roster. Joining Russell, who was on the team last year, is Dustin Watten, Ben Patch, and Jeff Jendryk. Berlin has traditionally had players from the United States representing their club in the Bundesliga, CEV Champions League, and CEV Cup. Scott Touzinsky, Kawika Shoji, Eric Shoji, Paul Lotman and Paul Carroll (an Australian player who played for Pepperdine in the NCAA) have all been on their rosters dating back to 2009.

The Berlin Recycling Volleys are looking to claim a 10th German Bundesliga title and make another run deep into the CEV Champions League in 2019. They won their 3rd consecutive championship in 2018, defeating VfB Friedrichshafen in the finals. Berlin also made it to the Playoffs 6 round of the Champions League.