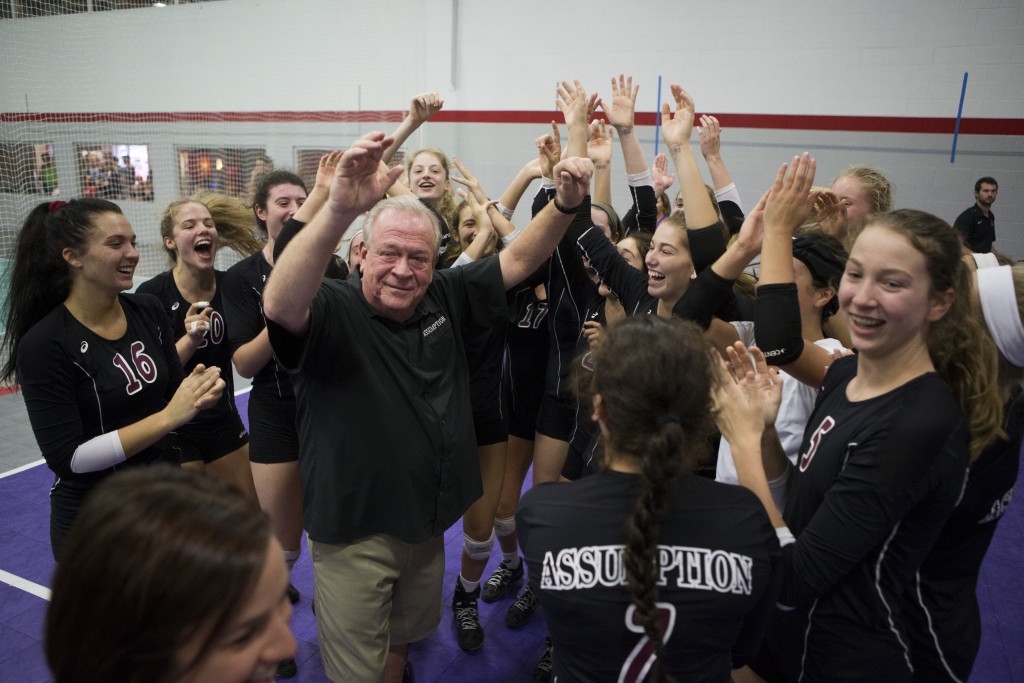 His Hall of Fame bio from the Nov. 19 announcement states:

A name that is synonymous with volleyball in the state of Kentucky, Ron Kordes has guided the Assumption Rockets to 20 KHSAA State Championships in 29 seasons as head coach. Since taking the helm in 1989, Kordes has racked up 1,060 wins against just 107 losses (.908 winning percentage), with undefeated seasons in 2001 (40-0) and 2005 (43-0). Assumption’s dominance included 12 state titles in a 13-year span, with eight-consecutive championships from 1995 to 2002 and a string of 174-consecutive wins against in-state competition. Kordes ranks in the top-20 all-time on the NFHS list for career volleyball coaching victories (11th among active coaches), while Assumption is tied for eighth nationally with its 20 state championships. The Rockets have been named national champions four times during his tenure, with two players (Katie George and Alexa Filley) earning national Player of the Year honors.

The gymnasium floor at Assumption High School was tabbed Ron Kordes Court in honor of the man dubbed the “face of the program” on Oct. 4, 2011. Then, in 2012, he was named National High School co-Coach of the Year by the AVCA.

Kordes captured his 1,000th career victory against St. Joseph’s Academy on Sept. 11, 2016. He is still walking the sidelines for the Rockets and led the team to its 20th Kentucky state championship as well as the USA Today Super 25 title in 2017.

Kordes also is the President and Club Director of the Kentucky-Indiana Volleyball Academy (KIVA) and is the father of former Saint Louis University and University of Louisville coach Anne Kordes, who was a member of his first state championship team in 1992 and now acts as an assistant coach under him at Assumption and as associate director at KIVA.

The Dawahares/KHSAA Hall of Fame, presented by Roberts Insurance, inducted its Class of 2018 tonight at the Hilton Downtown #khshof pic.twitter.com/oMtBkokAW9

Coach Ron Kordes and family as he accepts his Hall of Fame Placque and Medallion. Thank you for all you do! pic.twitter.com/BTlNMtyl6W

Excited to be celebrating with the amazing Coach Ron Kordes tonight as he is inducted into the KHSAA Hall of Fame. #deserving #GOAT pic.twitter.com/O1CjHwwYCF