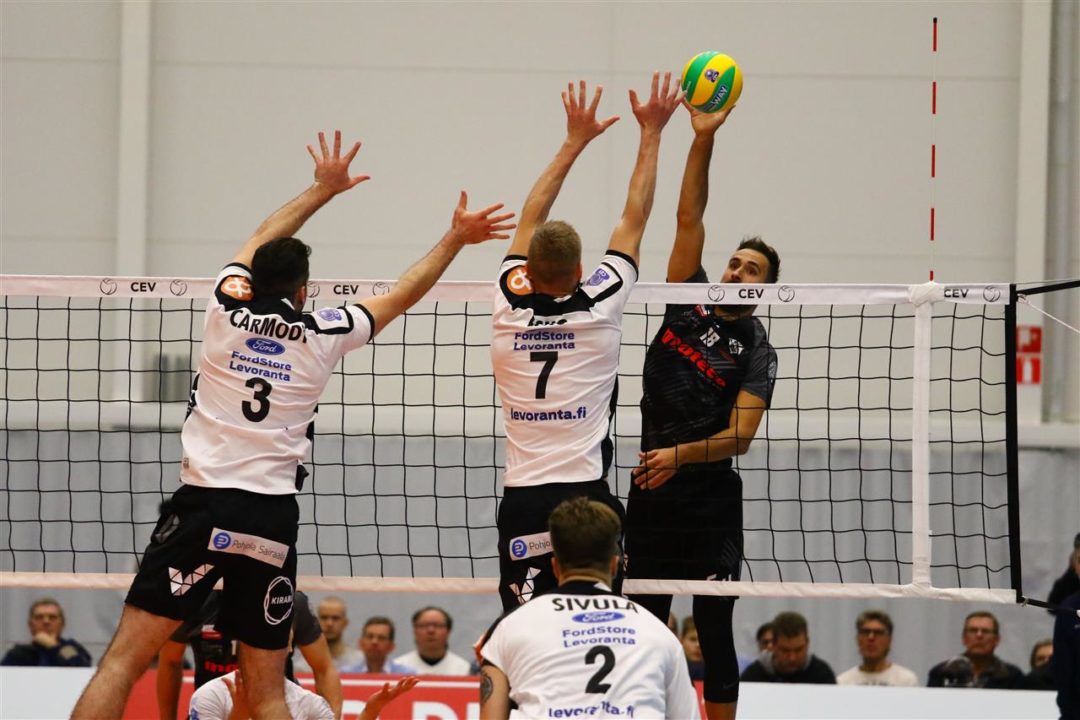 The first leg of the fourth round in the 2018 Men's Champions League has concluded with some challenging matches and easy wins for others.  Current Photo via CEV

The first leg of the fourth round in the 2018 Men’s Champions League has concluded with some challenging matches and easy wins for others. There are a total of five pools with four teams, leaving the top-20 teams competing for a spot in the next round of the competition.

Sir Safety made a huge 0-2 comeback over Italian rival’s Cucine Lube in what was deemed the CEV Match of the Week. The team’s from the Italian Men’s League did not disappoint in excitement as Lube went up 2-0 in the match but Sir Safety made some improvements that allowed them to tie things up at 2-2 and force a deciding set. There Sir Safety took the match 15-9 to reclaim Champions League glory as they won against Lube in the previous edition of the event in the semifinals.

Aleksandar Atanasijevic led the team with 34 points in the win while Marko Podrasacinin added another 13 point.

Both Piotr Orczyk and Matthijs Verhanneman put down 16 points in the win while Hendrik Tuerlinckx and Arno Van de Velde posted 15 and 11 points, respectively.

For Fenerbahce, Metin Toy led the way with 14 points while Guillaume Quesque added another 12 points in the loss.

VfB came out strong in their match over Halkbank with a 25-14 first set win but had more of a challenge in the second set as they pulled ahead 2-0 in the match with a 25-23 second set score. The third set saw Halkbank avoid the sweep but couldn’t force a fifth set, falling in the fourth 28-26.

For Halkbank, Burutay Subasi led the match with 20 points in the loss while Velizer Chernokozhev and Falik Samed Gunes put down 17 and 10 points, respectively.

It was a challenging win for For Store as they went up early in the match 1-0 but fell behind quickly 1-2 after two sets that exceeded the normal ending point of 25. The fourth set took some grit for the Finnish squad to take the win at 25-23 to force a fifth set. They rolled out to their first-ever win in the group stage in five sets over Paok.

Urpo Sivula led the way for the Finnish squad with 28 points followed by Olli Kunnari‘s with 15 points. Another three players on Ford Stores produced double-digit points – Markus Kaurto and Erik Sundberg each with 13 along with Thomas Carmody with 12.

Leading all scorers was Ramon Martinez Gion with 31 points for Paok.

After going down 0-1 to start the match, Chaumont fought their way to take the next three sets and the four-set win over PGE Skra. The fourth set was the most difficult of any of the sets as it took Chaumont until 29-27 to take the set and the match.

Stephen Boyer led the French squad with 33 points in the win while Yacine Louati added another 10.

In an all-Russiamatchupup, Lokomotiv proved to be the more powerful team as they swept through Dinamo Moscow in the first fourth round match. The first set was the most challenging of the three as Dinamo Moscow put pressure on Lokomotiv early but fell apart in the next two sets.

Leading Lokomotiv was Gyorgy Grozer with 21 points while Aleksey Rodichev posted another 13. Also adding in double-digit points in the win were Sergey Savin and Iliyas Kurkaev with 11 points each.

For Dinamo Moscow, Pavel Kruglov was the top scorer with 15 points.

Zenit Kazan opened round four off with a four-set win over Toulouse on the road. They fell behind in the match early after Toulouse won the first set 31-29 but were unable to claim another as Kazan finished things off in the next three sets.

Nikita Alekseev posted a match-best 26 points in the win while Matt Anderson recorded another 17 along with Maxim Panteleymonenko‘s 12.

For Toulouse, Bruno Temponi Araujo put down 18 points in the loss along with Luka Basic and Barthelemy Chinenyeze‘s 11.

Jastrzebski rolled through Berlin in the fourth round to collect a sweep. They didn’t much trouble until the third set with the German team but were able to put the match away at 26-24.

Salvador Hidalgo Oliva led the scoring for Jastrzebski with 18 points while Jason De Rocco added another 10.

For Berlin, both Paul Carroll and Steven Marshall put down 12 points in the loss.

Zaksa had no trouble flying through Arkas in three sets to claim an easy first-leg victory in round fThougheough it was a sweep, none of the sets were won easily for Zaksa as they fought tooth and nail until the very last point in each of the sets.

Diatec Trentino took down Noliko in four sets to open up the fourth round of play. The first two sets were taken by Trentino to give them the 2-0 match lead before Noliko stepped in the third to avoid the sweep. Trentino finished things off in the fourth set 25-17.

Renee Teppan led Trentino with 10 points while Filippo Lanza added another 16 points in the win.

For Noliko, Jelte Maan and Nicolas Bruno led with 12 points apiece while Jolan Cox put down 10 points in the loss.