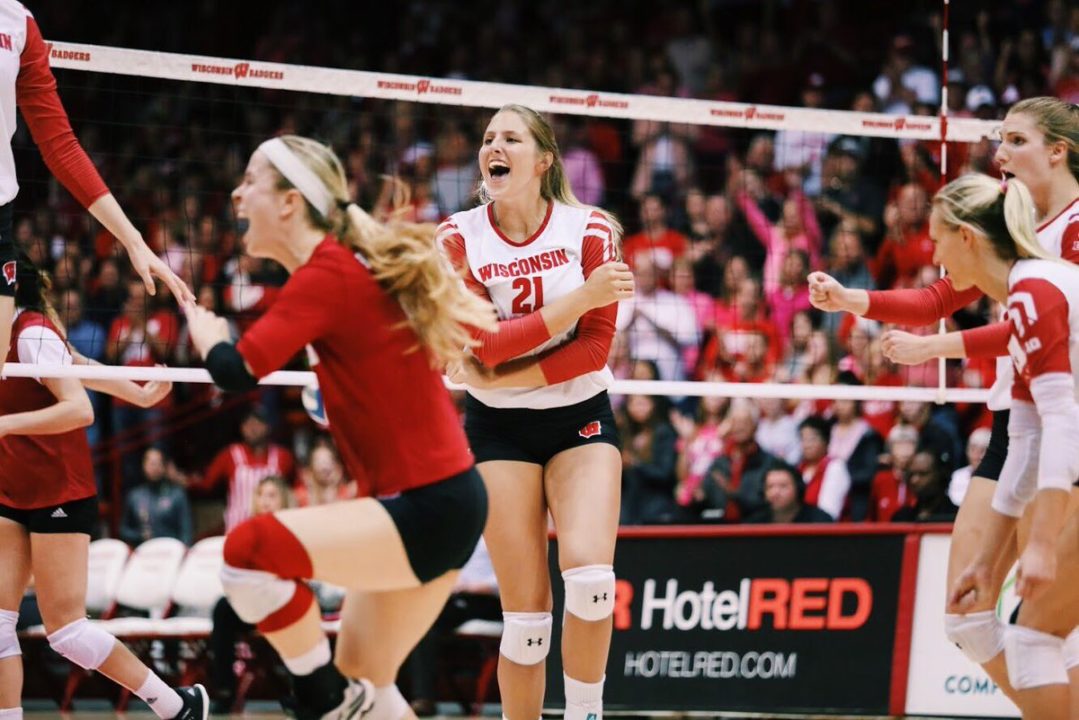 For the second straight season, Wisconsin knocked off Nebraska at UW Field House. The Badgers held the Huskers to a season-low .087 hitting clip, marking the first time the program had been held under .100 since at least the 2012 season. Current Photo via Wisconsin Athletics

For the second straight season, Wisconsin knocked off Nebraska at UW Field House. In 2017, the Badgers did so in four sets, while Friday’s matchup went the distance with UW coming back from a 2-1 deficit with help from an offensive spark by Grace Loberg.

Loberg managed six kills in the match, but had played in a defensive role until Set 4. Madison Duello (15), Dana Rettke (12) and Molly Haggerty (10) did the heavy lifting for the Badgers. Rettke hit at a .346 clip and finished off a double-double with a match-high 10 blocks. Haggerty added 13 digs to her kill total to round out a double-double. Syndey Hilley notched her 2000th career assist, amidst a 45-assist, 19-dig double-double, becoming the 11th Badger to reach the milestone.

She did it! #OnWisconsin

Nebraska trailed 10-8 in Set 3, before breaking off a 6-1 run including four UW miscues to go up 14-11. After falling behind again at 16-15, the Huskers scored five in a row with help from three more errors and two Sun putaways. Nebraska finished off the set and took a 2-1 lead in the match with a final 5-0 push. Sun managed a kill and an ace, while Stivrins capped the set with a kill and a block.

Loberg started Set 4 and earned three points from the service line, before adding four kills to help the Badgers to a 15-9 advantage. Two kills apiece by Duello and Haggerty put Wisconsin up eight at 20-12. Nebraska narrowed the gap to five at 20-15, but the Badgers pushed the match to a decisive fifth set with a 5-2 run. A Loberg putaway ended the stanza.

The teams played to a 4-all tie in Set 5, but Wisconsin boasted an 8-6 lead at the changeover after two kills each by Haggerty and Duello. The Badgers went up five at 12-7 as a Haggerty ace capped a 3-0 run. A Jazz Sweet kill stopped the run, but a service, a hitting error and a Loberg putdown clinched the upset win for UW at 15-8.

Check out the top 5 plays from @BadgerVB's 3-2 victory over Nebraska. pic.twitter.com/KWymtFoAfa