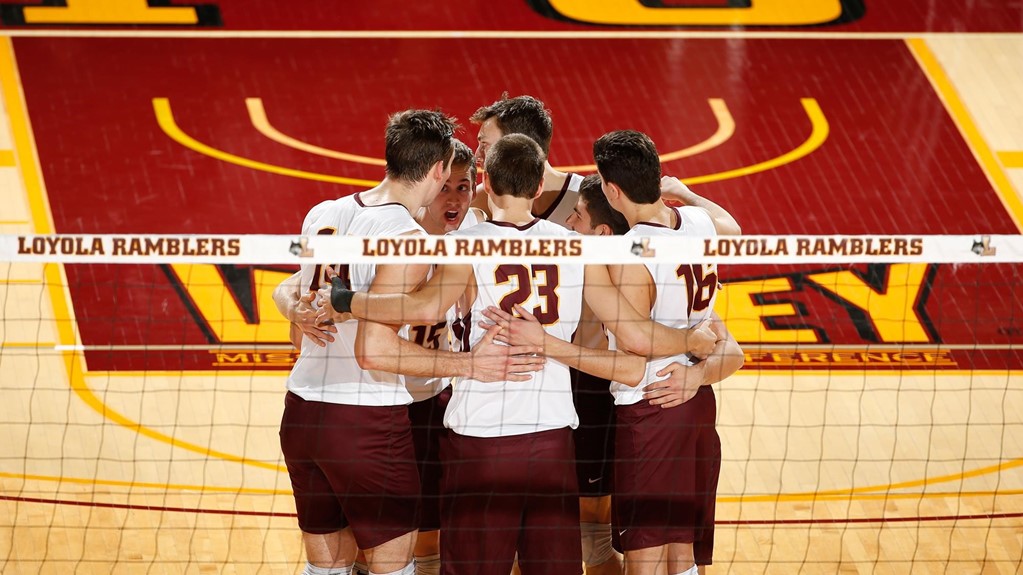 Loyola hit at a .432 clip as a team, including a .471 effort in Set 2, and boasted a 49-39 lead in kills in a sweep of instate foe Lewis on Saturday, to stay atop the MIVA standings. Current Photo via Loyola Athletics

Senior middle Jeff Jendryk and junior outside Collin Mahan notched 13 kills apiece to pace the Ramblers, while senior outside Ryan Jamison (8), senior opposite Ricky Gevis (7) and junior middle Paul Narup (7) followed. Jendryk had a flawless night offensively, hitting at a .684 clip with 13 kills in 19 errorless swings. Mahan hit .290 and added nine digs, while Gevis served up two of the team’s three aces. Narup paced the team at the net with four stuffs.

Loyola took an 8-5 lead in Set 1 as Jendryk turned in two kills and Lewis gave up three points on errors. The Flyers played into a tie at 8-all and remained within two or less until Narup notched two kills and a block to make it 18-15 Ramblers. Jendryk added two putaways to up the margin to four at 20-16. Three Lewis service errors and a Mahan kill gave Loyola a shot at the set at 24-19. Kills by Coenen and Moses kept the Flyers alive and prompted a Rambler timeout. Gevis scored out of the break to close out the 25-21 Loyola win.

Loyola led by as many as four in Set 2 but had to fight the Flyers off down the stretch for a 25-22 win. Two Jendryk putaways and a kill and an ace by Gevis put the Ramblers up 6-2 early. Lewis scored four straight, with two kills each by Mitchem and Coenen, to tie things up at 7-all. After four more ties, last at 11, Lewis grabbed a 14-12 edge with help from two Loyola errors. The teams were level again at 16 and traded points over the next eight serves leading to a 20-all score. Two Mahan putaways and two Flyer miscues gave the Ramblers the advantage in a final 5-2 push.

After a tie at 9, Loyola pulled away with six of the next seven points. Jendryk downed two kills and Gevis served up an ace to give the Ramblers a 14-10 lead. Lewis was within one at 17-16 thanks in part to three Loyola miscues. The Ramblers built the lead back to four at 22-18 as Narup and Mahan added a kill apiece and teamed up for a block. The Flyers took a timeout and got a kill out of the break, but Loyola earned a match-point try at 24-20 with a Jendryk putdown. Kills by Coenen and Moses prolonged the match, before Mahan ended the night at 25-22.