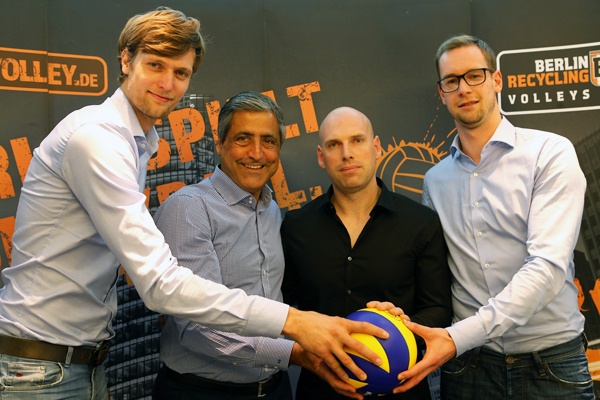 Luke Reynolds has left his assistant coaching position in the Polish league and the 32-year old will now act as head coach for the German side Berlin Recycling Volleys. Archive Photo via BR Volleys

Luke Reynolds has left his assistant coaching position in the Polish league and the 32-year old will now act as head coach for the German side Berlin Recycling Volleys, which advanced to the CEV Champions League Final Four in 2017.

The side finished fourth, falling to eventual champion Zenit Kazan in the semifinals and to Cucine Lube Civitanova in the bronze medal match.

The team did win the German Bundesliga title in 2017, after finishing second in regular season play, topping Friedrichshafen for its eighth title and second straight.

Reynold’s former boss at Jastrzebski Weglem, Mark Lebedewowi said the silver lining is that Reynold’s departure reflects well on the club, which finished third in the Polish league playoffs.

“The work that Luke has done with us was noticed by a top European Club,” Lebedewowi said. “He is an ambitious coach.

In his final statement, Reynolds expressed gratitude for the club and high hopes for his professional future.

“To the club, the fans, players and coaches, I would like to say that I loved being a part of this club,” Reynolds said.  “Coming to work every day was a great pleasure. From the happy faces, joking and hard work on the pitch and in the gym, there is no better environment or group of people to work with.  That is why it was so extremely difficult to leave something so wonderful. I could only do so in the face of enormous challenges and adventure.

“To move to the Club from Berlin as the first coach is to fulfill my dream as a coach, in addition to the possibility of playing in the Champions League and continuing work to become a better trainer. This is my farewell to Jastrzebski Weglem, but I hope and keep my fingers crossed that soon we meet again, either in the framework of preseason preparations or in European competition.”