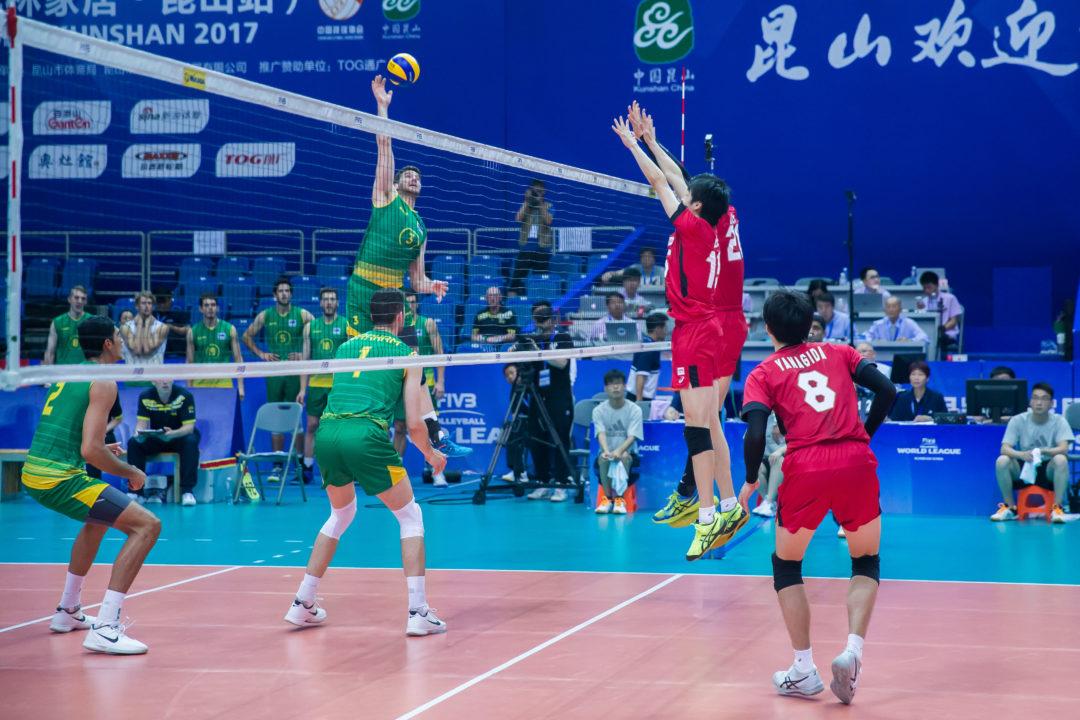 Australia defeated Japan in five sets. The loss is a big one for Japan, who now sit on the outside looking in. Current Photo via FIVB

The Pool G2 day started with Australia and Japan facing off with two of the top five teams in the Group 2 table. However, as hosts of the final four, Australia already has a spot locked up for the quartet. Japan needed the win, as they came into the day tied with two other teams at 12 points and trailing Slovenia at 15. Being that only three of those four teams will make the final four (to round things out with Australia), Japan needed the victory as bad as anyone. The good news is at the very least they collected one point, which may push them to the outside looking in, but it does keep them alive.

In the second match, the home-team in China kept alive any slim hopes of making the final four with a three-set win for the maximum of three points. Although it was a sweep, the first two sets went to extra points, with the first at a 43-41 mark.

Coming into the match, Australia trailed Japan by one point in the overall Group 2 table. However, as hosts of the final four, Australia didn’t need the win as much as Japan, who was deadlocked with two other nations for second through fourth at 12 points. It was a setback for the Japanese side, but also important they worked one point out of the match.

The first set played out to an 18-18 tie. Neither team would relinquish a cushion to the other, as the points swung back-and-forth like a pendulum until Australia held set point at 28-27. Masahiro Yanagida was solid on the day with 11 points for Japan, but on the next point hit into a triple block to end the set in Australia’s favor.

Japan retaliated with a 22-17 edge in set two. After splitting the next pair of points, Japan finished the set off with the final two. They ended the second winning 25-18 off a triple block of their own.

Things were even at 17 in the third set, but a 3-0 run gave Japan some separation. The two sides exchanged points as the lead held at three 24-21. Three errors by Japan brought Australia back to life, tying it at 24-24. Haku Ri, who tied for a team-best 16 points, brought one down out of the middle to get Japan back on track. That was followed by an Australian attack error to give Japan the set 26-24 and a 2-1 lead.

Needing a fourth set win to stay alive, Australia jumped out to a 14-8 advantage. The Australians held the lead from there with Japan closing in a bit until captain Paul Carroll put down one of his match-best 27 points to finish off the set, 25-21.

In a short set, Australia got the first jump leading 7-5. A 4-0 run extended the lead and give Australia a cushion by the time they had a match-point opportunity at 14-9. After an overpass from the Japanese side, it was Trent O’dea out of the middle smacking the ball down on first contact to seel the five set victory.

Australia won the match utilizing Arshdeep Dosanjh, a young setter making his first start of the tournament. In addition to assisting on Carroll’s 27, he also played a part in Luke Smith‘s 22 points and Nathan Roberts‘ 11.

“I think last week we played better than today. But it is important that when we played not well, we kept fighting,” Australian coach Mark Lebedew told FIVB following the match. “We are fighting every chance to win. For this game, mentality is better than the quality.”

Although Japan out-blocked (10-9) and out-aced (8-4) Australia in addition to having less attack errors (28-32), it wasn’t enough to overcome the spiking deficit won by the Australians, 70-58.

“We did not focus from the beginning, we lost so many easy balls,” Japanese head coach Yuichi Nakagaichi told FIVB. “Australia played well today, they played good defense, their libero played excellent. Australia could do what they can, we could not do what we can, so we lost the game.”

Japan now awaits the Netherlands and Slovakia, who with wins would move ahead of Japan and put them as the fourth team who is looking for a top three spot. The good news is at the very least they garnered one point and Netherlands still must play Slovakia tomorrow. Japan will face Turkey tomorrow and finish up the pool with China in a match they may be do-or-die for Japan. The loss didn’t end their chances, but it makes them a whole lot more difficult, especially if they have to defeat China on their home court on Sunday.

Australia is in good shape regardless of what happens this weekend as they are already locked into the final four. They’ll take on pool-host China before finishing things off with Turkey. As they did in using a new setter, this week is more about experimentation, practice and developing strong play for Australia. Winning in five sets over Japan is a strong start as the Australians prepare for the final four.

Coming into the day both China and Turkey were not in good territory to make the final four, however China now still has a slight hope of pulling the improbable after collecting the maximum three points in a wild-three set match.

Gokhan Gokgoz of Turkey, who finished tied for the team-lead with 15 points, hit one off a Chinese defender to extend Turkey’s biggest lead of the first set at 22-19. A timeout from China allowed them to regroup and ignited a 3-0 run that was finished off by the double-block of Shuhan Rao (eight points) and Chuan Jiang, who led China with 17 points. The set would than continue in a never-ending fashion with both teams taking but not capitalizing on set point chances. The 30-point mark hit for both teams. Then 35. Then 40. Turkey led 41-40, but again couldn’t finish the set as China tied it. Daoshuai Ji (10 points) had his lone block of the match to swing the set point opportunity China’s way. Finally, another combination from Rao, who had two blocks in the match, and Jiang, who had four blocks, ended the marathon set, 43-41.

Turkey didn’t let it drain their mentally and pulled ahead 14-10 and eventually 21-16 in set two. All the sudden things went downhill for Turkey, who lost eight of the next 10 points, giving China the 24-23 lead. The teams split the next two points as Jiang ended the set with an ace for a 2-0 Chinese advantage.

It seemed as if the fashion of the set losses finally wore on Turkey, as China jumped in front 11-5 in the third. Turkey would regroup and make the set a closer, but never got over the hump. China ended the match on Jiang’s third and final ace of the match, as it rocketed down the right line and off the extended arms of Yasin Aydin of Turkey.

Most of the statistics were relatively even in the match, but China’s biggest advantage came from its block; where Turkey only recorded five blocks, China had 15. Behind Jiang’s serve, China also had six aces to Turkey’s four.

“This is an important game,” China coach Raul Lozano said to FIVB post-match. “This is the first time that the new Chinese team played in China. In the first set, the players were quite nervous, they made a lot of mistakes but they managed to overcome it. We played like a team in the game, which is a good sign. I am satisfied that the players kept calm during the game when they meet problems and tried to solve them.”

China improves to 3-4 overall now with 10 points. They’re not completely out of reach of the final four, but they need to complete a stellar week in addition to having some help from other teams. They get Australia tomorrow, and if they win that it sets up an intriguing battle with Japan on the final day. Although both opponents are in the top five of the Group 2 table, China gets both matches at home. At the very least though, China’s win today likely assures they won’t be relegated (which would have been a possibility had they gone 0-3 this week).

Relegation is still possible for Turkey as well, but with eight points to Egypt’s four, they still look okay. It’ll be Japan tomorrow and Australia to finish things off, as Turkey will look to improve on a 3-4 record.