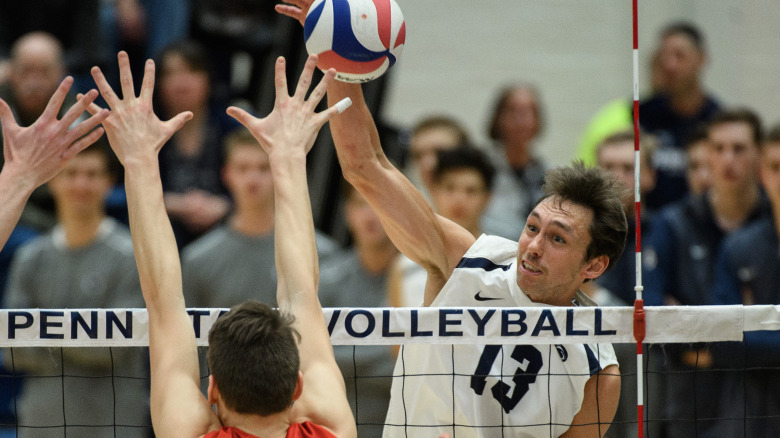 Penn State kicked off the EIVA season with an all-around victory over Saint Francis. The Nittany Lions outhit the Red Flash .275 to .147 and outdid SFU in kills (39-31), aces (7-3) and blocks (8-6). Current Photo via Penn State Athletics

Redshirt junior outside Matthew McLaren notched a match-high 12 kills to pace PSU, while hitting at a .500 clip and serving up three of the team’s seven aces. Redshirt senior middle Kevin Gear and redshirt senior opposite Jalen Penrose added nine putaways apiece, while redshirt senior outside Aiden Albrecht rounded out the offense with six kills. Gear hit at a team-high .600 clip with 15 errorless swings to go with a team-best four blocks. Penrose and Albrecht added five digs apiece.

Redshirt senior outside Stephen Braswell also put down 12 kills for the Red Flash and was one of three players with an ace. Senior outside Brandon Buck chipped in eight kills on a team-high .318 hitting effort to go with an ace and five digs. Senior middle Keith Kegerreis accounted for a team-leading four blocks and four kills.

Saint Francis raced out to a 5-1 lead in Set 1 as Braswell turned in two kills and an ace, and held on to the advantage to the midway point in the set. Down 14-8 after two more Braswell putaways, Penn State mounted its comeback, eventually tying it up at 17. McLaren served up two ace in the rally, which saw three players notch kills and SFU commit three errors. Saint Francis called timeout and scored three of the next four, but couldn’t hang on as PSU countered with a 4-0 run and seven of the final 10. McLaren came alive with three kills and a block to close out the 25-23 win.

Penn State boasted a six-point lead at 14-8 midway through Set 3 as Albrecht scored on two kills and a block and Gear turned in two stuffs and a putaway. Saint Francis did not go away, however, chipping away to knot it up at 19. Kegerreis notched two kills and three blocks and Braswell added three kills in the rally. It was nearly all Nittany Lions from there, however, as PSU capped the sweep with a 6-1 run. McLaren accounted for four kills in the final stages. A SFU hitting error clinched the victory.

No. 9 Penn State grabbed its first EIVA conference win of the season Saturday night at DeGol Arena as the Nittany Lions swept the Red Flash 25-23, 25-18, 25-20.

Matthew McLaren led Penn State in kills on the night registering 12 to go along with three service aces, one dig and two blocks. McLaren tied with Saint Francis’ Stephen Braswell who posted 12 kills of his own.

Penn State hit .275 for the match with a set high .387 hitting percentage in the second set where the Nittany Lions recorded 14 kills on 31 swings while only committing two attack errors.