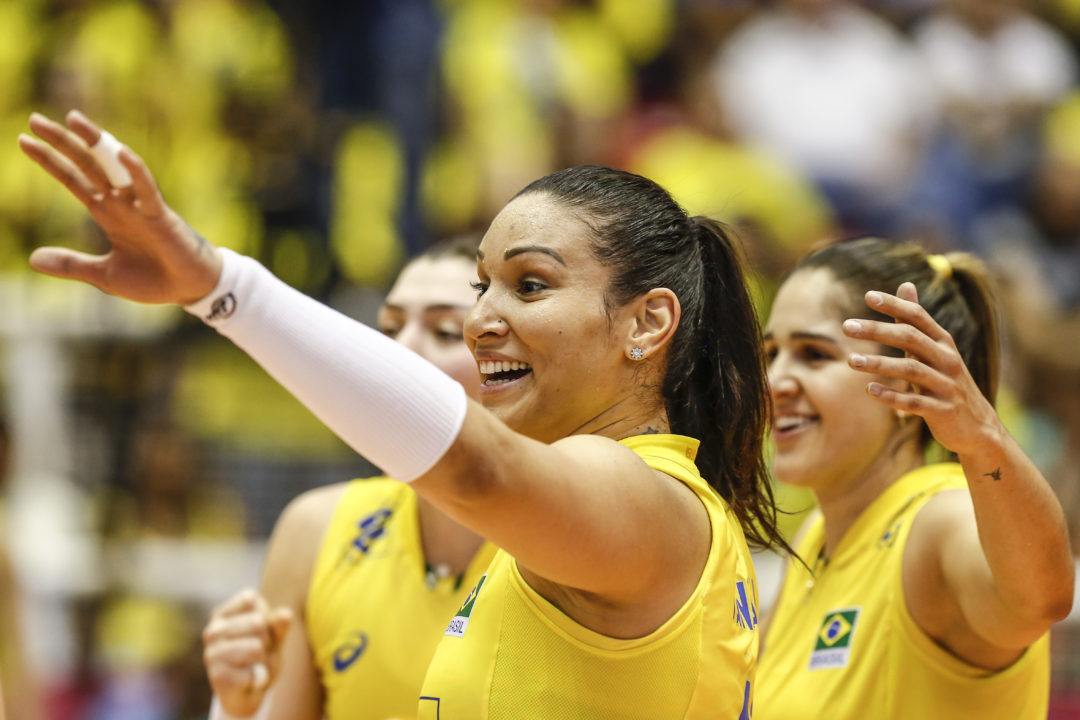 Superliga hasn't seen such offensive output since its start in the 1993 season. Current Photo via FIVB

Just 9 days after Tifanny Abreu beat her all time Superliga’s single game scoring record that stood since 2013, Tandara Caixeta came back with a vengeance and rewrote her names on the record books by tying Tifanny’s performance. And she did so in style, scoring 39 points on 36/70 (51%) hitting, including 15 points on the 4th set alone on 15/22 (68%) hitting, when it mattered most for her team’s victory hopes. For comparison’s sake Tifanny’s 39-point-night came at 33/75 (44%) hitting.

Tandara tied the record when her team was trailing Minas 13-10 on the tie break. She then didn’t get a single chance to beat the record, as no balls were set her way in the team’s next two possessions. When the game was 14-11, Tandara’s coach subbed Osasco‘s setter, Fabiola Josefa, out to put in a middle blocker, and asked Tandara to become the team’s setter, which she did so for the game’s next two possessions, Osasco losing the match in sequence. As a curious side-note, both Tifanny’s and Tandara’s performances came at a loss of their respective teams.

Is this the beginning of a rivalry? If Tifanny is to be called upon by José Roberto Guimarães for the Brazilian national team, she would have to beat Tandara for the spot. Here is what Tandara said of Tifanny’s status as the first transgender woman to play in Brazil’s female Superliga, after facing her in the competition:

“I respect her story, for society it is very important, to spearhead such a movement, she is a person I respect a lot. However, as to her playing with women, it’s a tricky subject. I did some research on it, talked to a lot of people about it, and I believe I have gathered enough evidence as to not agree with her playing in women’s volleyball. We need to be able to differentiate prejudice, bigotry, and physiology. Tifanny developed as a male. Her lungs are bigger, her heart is bigger, her hips are smaller, so it’s much easier for her to jump.

I had a sensation that at the beginning of our game, she was holding back a little, trying to hit the ball more with skill than with force. But at the decisive moments of the game, she came out much stronger.”