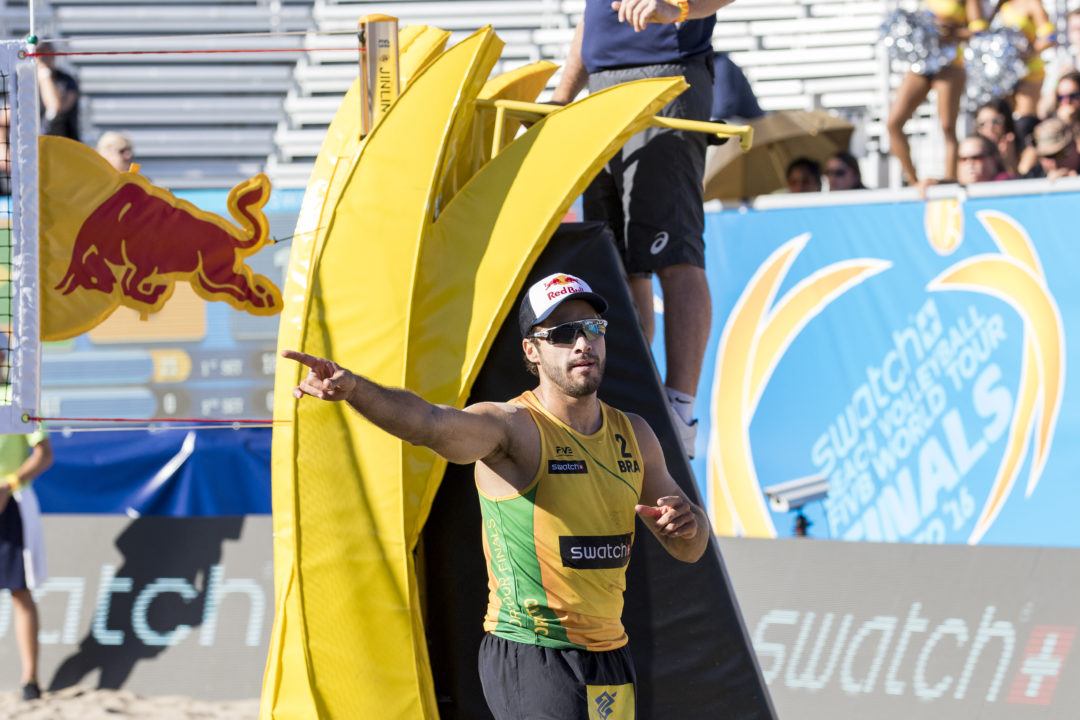 Bruno Oscar Schmidt (above) and his partner Alison Cerutti opened their World Tour Finals with a sweep of the Italian team. Current Photo via Chris Tanouye/christanouye.com 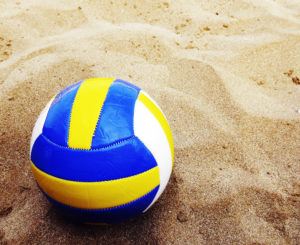 The 2016 Olympic Champions from Brazil began their tournament late in the afternoon on Friday by sweeping away their Italian counterparts.

In spite of the final set scores, it was actually the second set of this matchup that was more competitive than the 1st. In the opening frame, the team from Brazil led 20-15 and took 4 match points to close out.

In set 2, however, Ranghieri and Carambula kept the match competitive as late as a 12-11 score before Brazil went on a 5-1 run to pull away.

Alison led all scorers in the match with 18 points, including 7 kills in each set. His partner Schmidt recorded a total of 4 aces, including 3 in the second set without a fault to match it to.

The win moved the Brazilians to an all-time 8-0 versus their Italian counterparts on the FIVB World Tour.

As pointed out by the American veteran Dalhausser, the eventual winners were slow out of the gates in their first match of the Finals.

“We had a really, really slow start,” Daulhausser said. “We had opportunities, but we blew it. We played better in the second and third sets.”

The Americans would commit 8 faults (4 on serves, 4 on attacks) in the first set, which was more than they’d have  in the other two sets combined (2 and 3, respectively).

The win gives the Americans the all-time edge on the World Tour with 2 wins in 3 tries.

The Latvian pair of Samoilovs and Smedins, who were unable to advance out of pool play at the Olympics, have bounced back to start their World Tour Finals with a win over Poland.

“It was like straight after Rio we needed to have good results so we went straight to Long Beach and it was important to us to have good emotions and good games to forget it faster and recover emotionally faster,” Samoilovs said. “Then CEV Masters in Jurmala in front of our home crowd and now we’ve recovered. It’s in the past. We can’t change anything now.”

Samoilovs dominated the scoring for the Latvians. Even without a single ace to either player’s credit, he was responsible for 29 of Latvia’s 44 earned points.

Balance is what carried the Latvians, though. In the second set, where they lost, Samoilovs scored 11 attacking points to Smedins 3. In the dominant and decisive final set, the two split the scoring at 4-4, benefiting from 6 Polish faults.

The American pair of John Hyden and Tri Bourne, second in this tournament but third in American Olympic qualifying (and thus out of the tournament), pulled off a confidence-building win against the Brazilian duo that took 9th at the Olympics.

The Americans fell behind despite 10 first-set kills from Bourne. In total, Bourne had 21 of 27 attack points, all 6 block points, and 4 of 5 services aces for Team USA.

The Brazilians let this match slip away with 6 and 8 faults in the second and third sets, respectively. Evandro, one of the best servers in this tournament, scored 5 aces, but also had 6 service errors. 3 o f those 6 (and a total of 5 for Brazil) came in the decisive final set.