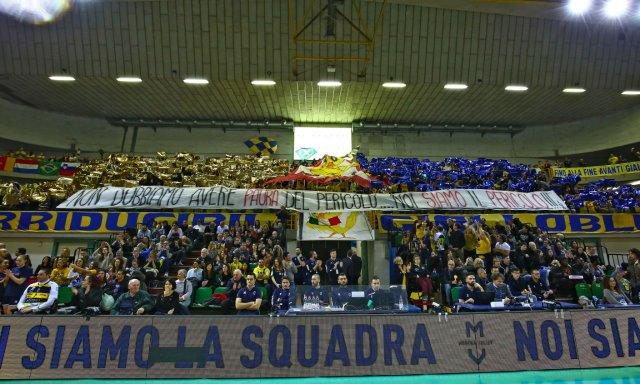 Modena volley, one of the most well-known volleyball clubs in the world, leads the SuperLega in gate revenue for the 2017-2018 season with almost a million dollars.  Current Photo via legavolley.it

While pro volleyball is not the most lucrative of sports, the money that the top teams in the Italian SuperLega generate is nothing to be ashamed of. Once again, the team that makes the most revenue off of ticket sales is Azimut Modena.

Modena is one of the most recognizable brands in men’s professional club volleyball. Their dandelion and azure colour scheme is one of the most aesthetic in all of sport, and their roster is fortified by international superstars like Earvin Ngapeth, Bruno Rezende, and Max Holt. Modena itself is a tourist destination known for its rich culinary history and luxurious Italian car manufacturing. Add to that a rabid fan base and there is no wonder why Modena is such a profitable city to host a volleyball team in.

Note that Modena, as the highest-raking team, doesn’t earn enough from ticket sales to cover even the rumored salary of their highest-paid player, Eaarvin Ngapeth, for the season.

As you can see, there is a huge gap between the highest earning teams and the lowest. Modena makes over 11 times more gate revenue than Vibo Valentia. Over half of the leagues almost $4 million is generated by the top 4 teams, Modena, Civitanova, Perugia and Trentino. In a league where the best talent often goes to the highest bidder, it is no wonder that these 4 teams dominate the rankings and championships as well.

Modena had the highest average ticket price at almost $15. Sora had the lowest average ticket cost in the league at $4. It makes sense that ticket prices generally fall in line with the competitive success of a team. Keep in mind that the gate revenue generated by ticket sales is only one of the ways in which these organizations make a profit. Merchandise sales, sponsorship, and events are just some of the other sources of revenues.