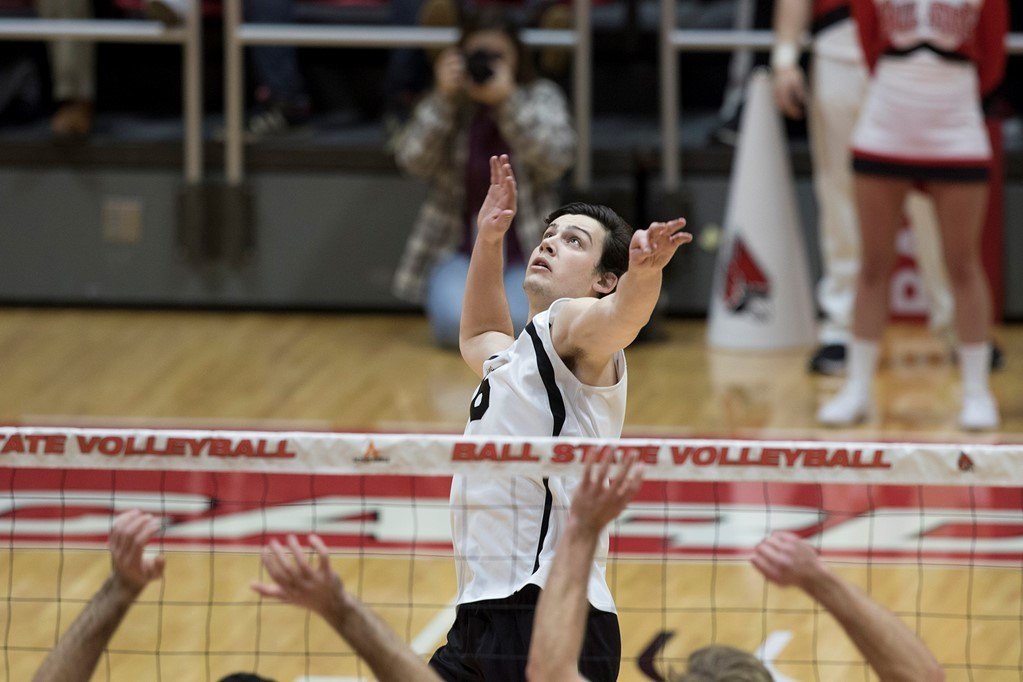 MUNCIE, Ind.—The No. 12 Ball State men’s volleyball team was tested by MIVA foe, Quincy, Friday night in Worthen. The Cardinals were able to rally and pull off a 3-2 victory over the Hawks.

Brendan Surane led the Cardinals with 14 kills while Matt Walsh and Matt Szews each tallied 13. Defensively, Adam Wessel led with 16 digs. Connor Gross had 53 assists and 10 digs on the night. As a team, Ball State knocked down 62 kills, 62 digs, 17 block assists and three solo blocks. The Cardinals also had an impressive eight service aces.

The Hawks came out strong and quickly took an 8-4 lead in the opening set, forcing an early Ball State timeout. The Cardinals trailed by as much as five before evening out the score 23-23, but eventually fell in set one, 25-23. Surane led the Cardinals in set one with four kills. Mitch Weiler added three kills and one block assist.

After 13 tied scores and five lead changes, the second set went to Ball State, 25-20. The Cardinals knocked down 16 digs, 14 kills and four block assists. Weiler led the way with four kills and Walsh added three. Adam Wessel led the team in digs with six. The Cardinals were able to hold the Hawks to only six kills for a -.029 hitting percentage.

Quincy took set three with a final score of 26-24. Szews led the way with a set-high six kills. Wessel and Gross each had a team-high four digs.

The fourth set went down to the wire, but the Cardinals were able to secure the victory, 26-24 after a block assist from Parker Swartz and Surane. Szews knocked down a team-high four kills while Surane and Walsh each had three.

The Cardinals came out on fire in the final set, scoring the first five points and forcing a Quincy timeout. Ball State finished the match with a 15-12 set five victory on a Surane kill, assisted by Gross. The Cards had 10 kills for a .389 hitting percentage in the fifth set.

The hosts scored the first five points of the frame before Quincy clawed back in with the next three points, the last on a solo block by senior Jarrod Kelso (Hilliard, Ohio/Hilliard Darby). Kelso’s kill cut the deficit to 6-5 a couple points later.

Kelso later paired with junior Jacob Sheets (Arnold, Mo./Seckman) on a block and junior Thane Fanfulik (Hilliard, Ohio/Hilliard Darby) followed with a setter dump to tie the game at 8-8. It was tied again at 9-9 on a kill by Sheets before the Cardinals scored the next two to take an 11-9 lead. QU was not able to tie it after that point as Brendan Surane’s kill clinched the win for Ball State.

In the first set, the Hawks trailed 23-21, but scored the last four points, getting two kills and two blocks from Kelso. Fanfulik and sophomore David Siebum (St. Louis, Mo./Vianney) joined him on the blocks.

After dropping Set 2, the Hawks also came back late to win the third set. QU trailed, 24-22, but Siebum put down a kill followed by consecutive solo blocks by freshman Blake Sprecher (Cross Plains, Wis./Middleton) to give the Hawks a 25-24 lead. An attacking error by Ball State handed the win to Quincy.

The Hawks racked up 16 blocks in the match – the most they have had in a single match since at least the 2012 season.

Fanfulik registered his third double-double of the season with 35 assists and 11 digs to go with four blocks and three kills.

The Hawks will return to the court on Saturday (April 1) for a 6 p.m. CT match at Fort Wayne.