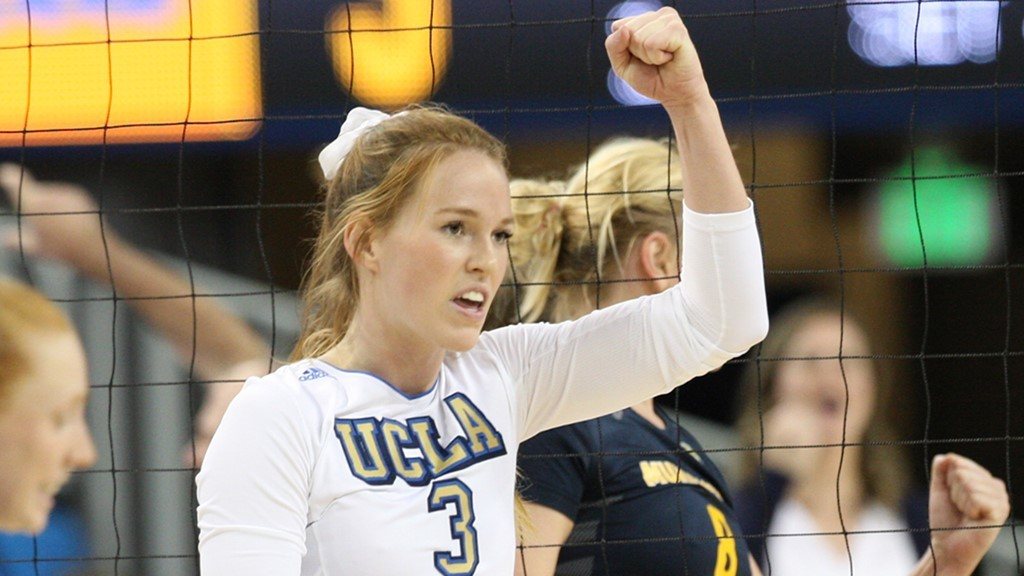 Reily Buechler led the Bruins with 21 kills as they overcame an early deficit to Murray State. Archive Photo via UCLA Athletics

The Murray State Racers stunned the 10th-seeded UCLA Bruins by stealing the 1st set of the teams’ opening round game in the 2016 NCAA Women’s Division I Volleyball Tournament. The Bruins, however, got stronger each set, and eventually won the game 3-1 to advance. They’ll play the Baylor Bears on Saturday back in the Pauley Pavilion.

Murray State, the OVC conference champions, bolted out to the first 3 points of the game, and while they wouldn’t exactly run away (UCLA fought back to tie things at 4), 7 kills from Scottie Ingram was enough for the Racers to jump on top 1-0 after the first set.

The Bruins team that came out in the second set, however, was an almost recognizably-different team. Jordan Anderson started things off with back-to-back kills (her only two of the set) and UCLA jumped out to a 9-3 lead. Murray State didn’t go down easily, however. Ingram had another 8 kills in the second set to keep them in contention, but 3 errors from setter Hannah Stultz (2 on sets, 1 on a serve) helped UCLA pull away.

Ingram had 6 and 3 kills in each of the 3rd and 4th sets, respectively, but the Racers couldn’t generate enough other offense to hold off the Bruins. While Murray State dug and hit well, UCLA dominated them in both aces (7-0) and blocks (9-0).

Reily Buechler led UCLA with 21 kills and just 2 errors on 51 swings for a .373 average, while Anderson chipped in 12 (.345 percentage) and Claire Felix had 11 (.647 percentage). Felix has double-digit kills in her last two games and is hitting a huge .355 on the season all-told. If she continues to play well out of the middle, UCLA is set up for a deep run in this tournament.

UCLA will face a Baylor team in the next round that has a similarly-focused offense centered around one hitter, Katie Staiger. That matchup sets up well for the Bruins if they can get off to a better start early.

LOS ANGELES – The 10th-seeded Bruins rallied back from dropping the first set against Murray State on Friday in the First Round of the NCAA Championship at Pauley Pavilion, taking the next three to defeat the Racers in four. Set scores were 21-25, 25-18, 25-15, 25-9.

UCLA (25-6) advanced to the Second Round on Saturday against Baylor, which defeated San Diego in five sets earlier on Friday. The Bruins and the Bears will square off at 7 p.m. Free live video and audio will be available at UCLABruins.com.

Murray State (23-9) led wire-to-wire in set one, scoring the first three points. UCLA evened things at four thanks to two Buechler kills, one by Frager and a Racer attack error, but Murray State raised its lead up to four at 12-8. A 7-3 Bruin run, which included two Buechler kills and a block assist, evened the score at 15, but the Racers would not surrender the lead, getting it to as many as five at 24-19 before winning on their third set point, 25-21. Buechler had six kills in the opener, Anderson added three and Formico and Van Winden both had four digs, as the Bruins were out-hit .357 to .217.

UCLA never trailed in set two to even the match. The Bruins jumped out to a 9-2 lead thanks to two Anderson kills with an ace, Buechler and Van Winden kills, a Chandler ace, a Buechler/Frager block and two MSU errors. The seven-point difference was the biggest for the Bruins in the second set. At 17-13, the Racers rallied with four in a row to even things at 17, but UCLA ended the set on an 8-1 run to win it 25-18. Seven in a row on a Frager kill, two in a row by Buechler, a Felix kill, an MSU attack error and another kill each by Buechler and Felix gave the Bruins six set points. Buechler’s fifth kill of the set closed out the seven-point win. Van Winden (4-for-8) and Felix (3-for-4) were both error-free. Formico added seven digs, while Chandler and Miller both had four digs. The Bruins out-hit the Racers .316 to .209.

The Bruins dropped the first point of the third, but then scored the next five and led throughout the remainder of the set. At 5-4, six in a row raised the Bruins’ lead to seven. Buechler had two kills during the run, Anderson added a kill, Frager and senior Haley Lawless teamed up for a block and Murray State made two errors. The closest the Racers would get the rest of the way was four. UCLA’s biggest margin would be the final score of the third, 25-15. At 18-13, the Bruins scored seven of the last nine, with Buechler contributing four kills during the run, including the last one. She was error-free (9-for-20) in the third. Van Winden added 11 digs, Chandler had six, Formico posted four and Frager had four blocks. The Bruins out-hit the Racers .324 to .041.

Murray State’s biggest lead of the fourth was three at 5-2. Trailing 7-5, the Bruins scored 20 of the last 22 to rout the Racers. A 6-0 run on three Felix kills, two by Van Winden and a Racer attack error made it 11-7. After a sideout, the Bruins then scored 10 straight, as Anderson had two kills during the run, Formico served two aces and Felix had a kill and a solo stuff. Following another sideout, the Bruins scored the final four on an Anderson kill, two in a row by freshman Madeleine Gates and a Van Winden/Gates block to finish up the 25-9 win. The Bruins as a team were error-free in the fourth with 17 kills in 32 attempts (.531). Felix was 5-for-6, Anderson 5-for-7 and Van Winden 3-for-7. Formico posted 11 digs.

The Murray State volleyball team’s season came to an end late Friday night in Los Angeles, Calif., in the First Round of the NCAA Tournament as the Racers fell to No. 10 national seed UCLA in four sets. The Racers were able to lead the first set wire-to-wire to take an early 1-0 lead on the strength of a 25-21 victory and became the first team in program history to win a set in the NCAA Tournament. The Bruins, however, would rally to win the final three sets of the match, 25-18, 25-15 and 25-9.

The loss snaps the Racers’ 15-match winning streak which was the second-longest streak in program history. MSU finishes the season 23-9 and for the second time in the last three seasons, the Racers’ season ends at the NCAA Tournament.

Three-time OVC Player of the Year Scottie Ingram closed her illustrious career in grand fashion as she recorded a match-high 24 kills and hit .339. Ingram ends her career in a Racer uniform extending her program record of career kills to 1,598. Ingram also tallied her 24th double-double of the season as she recorded 14 digs in the match.

Kristen Besselsen ends her career with a 10-kill performance while Dacia Brown, Rachel Giustino and Kamille Jones chipped in with five kills each. Setter Hannah Stultz, who also played her final match at MSU, recorded a match-high 40 assists and had 11 digs while Ellie Lorenz notched 25 digs to cap her fantastic career.

Besselsen ends up 10th all-time in career kills with 1,050 and Lorenz’s 1,875 career digs are the fourth-most in Racer history. Lorenz’s 647 digs this season are the second-most for a single season in MSU history.

MSU ended up hitting .156 for the match while the Bruins (25-6) hit .333 on the night. UCLA also had nine blocks and seven service aces in the match.

In the past three seasons, the Racers have won 76 matches overall, including 44 in OVC play and have claimed three consecutive OVC regular season titles, while also appearing in the NCAA Tournament twice.