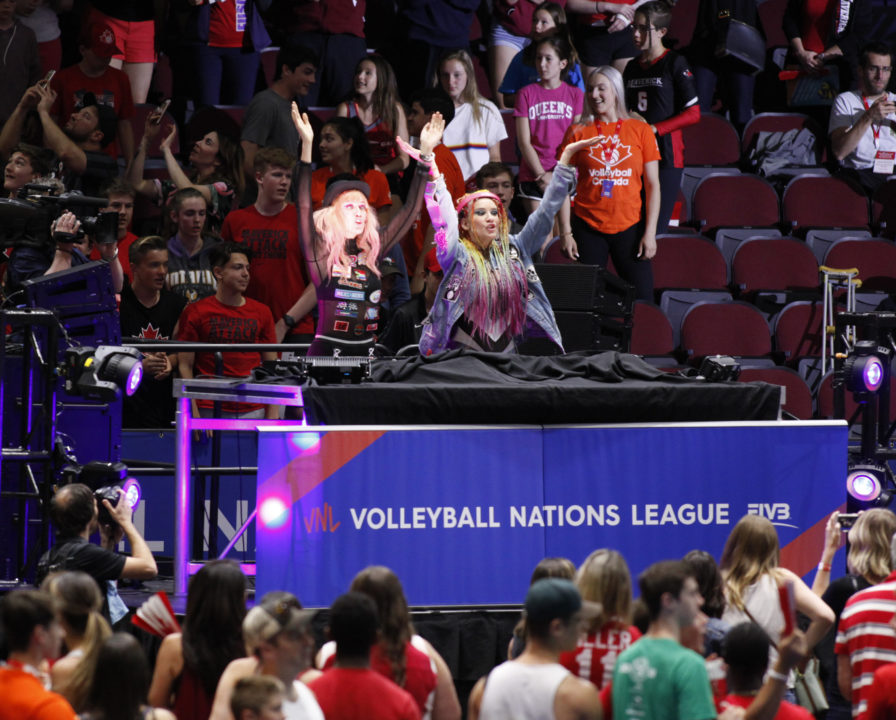 Today in Ottawa, the fans of the Volleyball Nations got a special performance from Australian DJ duo NERVO. NERVO launched... Current Photo via FIVB

Today in Ottawa, the fans of the Volleyball Nations got a special performance from Australian DJ duo NERVO. NERVO launched their brand new song “Worlds Collide” in the middle of the break between the second and third sets of the USA vs. Canada match. NERVO are twin sisters, Olivia and Miriam Nervo, are the most successful female DJs in the world, having written and produced some of the biggest club tracks in recent years, including “You’re Gonna Love Again.”

“As Australians, we’re no strangers to sport. But the party atmosphere of VNL matches is pretty special,” said Liv Nervo. “The energy between the players and the fans has been at the heart of the collaboration, and we can’t wait to be in Canada to add ‘Worlds Collide’ to the mix.”

NERVO did visit with the Netherlands wonen’s national team before their VNL matches in Appledoorn at the end of May. The Austrlian DJs had a busy weekend as they performed in Ibiza on Thursday, June 7th, before flying to Las Vegas to perform that evening on Friday June 8th and then to Ottawa for a gig on Saturday night.

“Sport and music are a fantastic mix as both deal with human creativity and capacity to engage with people. Volleyball has a global fan base and the VNL will provide a platform for great sport, alongside fantastic entertainment and an unforgettable fan experience. There will be an amazing party atmosphere and NERVO will be a big part of that. They are great ambassadors for our sport and ‘Worlds Collide’ is the perfect anthem for this competition.”

Click here to listen to NERVO’s “Worlds Collide” on SoundCloud.