Netherlands Beats Austria 3-2 in Front of 1,200 to Take Lead in Pool B 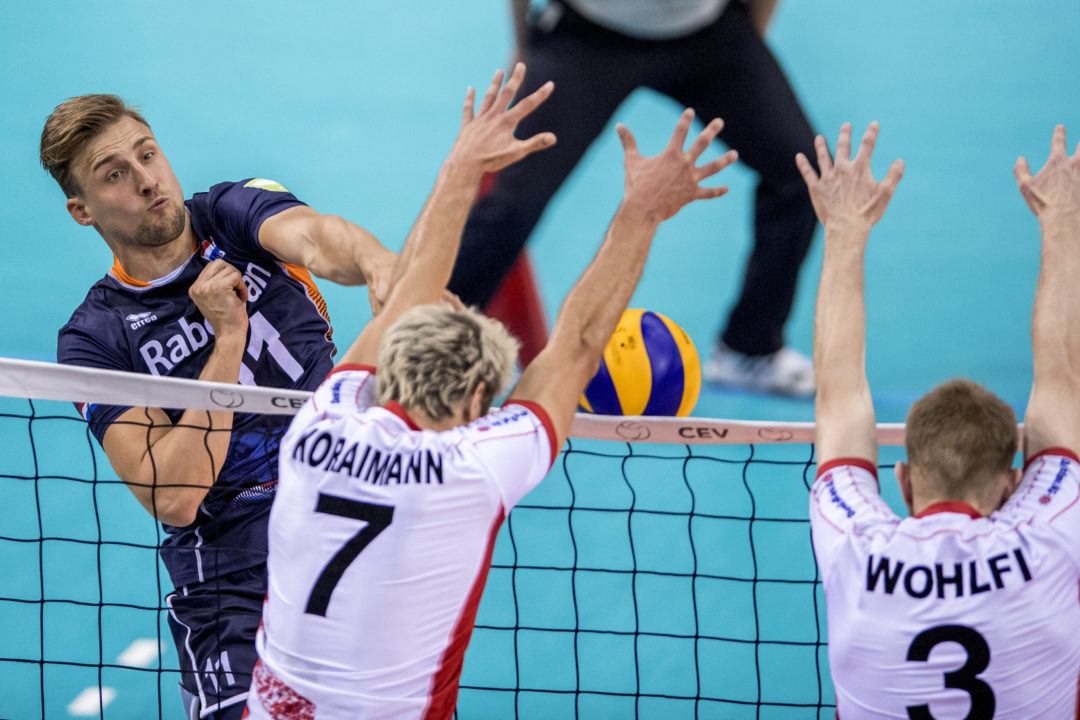 Pool B in NED

The Netherlands are in pole position for their 12th World Championship appearance, and first since 2002, thanks to a 3-2 win over Austria. While a 3-1 or 3-0 win would’ve clinched that spot, the Netherlands now can assure themselves of a berth by winning at least 2 sets against Slovakia on Sunday.

If they lose to Slovakia 3-1, the Dutch will still likely qualify upon conclusion of the tie-breaking process at 4 wins and 11 points, while a 3-0 loss would leave them out and Slovakia in.

The Dutch are assured of no less than a runner-up finish, though if they were to beat Slovakia, then Austria could still jump the Slovaks for 2nd, and a berth in the 3rd round of Worlds qualifying out of Europe, if they are able to beat Moldova on Sunday.

“In the first set, we were able to manage that pressure, but we had no answer to their service pressure in the second and third act,” Dutch coach Gido Vermeulen stated afterwards.

While the 4th didn’t go much better in the Dutch reception game, they were able to execute on 57% of their attacks to even the match and force a 5th set.

In that 5th set, while the Dutch reception game wasn’t perfect (only 17% excellent reception), they had 83% positive reception, which led to a 75% success rate on their 8 attacks. Combined with 2 blocks and 3 aces, the Dutch earned the 5th set victory on their own accord, rather than Austrian errors.

Moldova got their first win of the tournament, beating Luxembourg 3-2 (25-23, 22-25, 25-16, 22-25, 15-12). With that loss, the 4 countries (Luxembourg, Northern Ireland, Cyprus, and Iceland) advancing from the small countries qualifier remain winless, aside a Cyprus win over fellow small-country side Northern Ireland earlier this week.

“Luxemburg is more our level, today we had a chance to win and took it,” said Moldova team captain Dmitri Bahov directly after the match. “Tomorrow against Austria we will fight and try to give our best game, we will see how far we come”.

Moldova had a balanced effort, with 5 players scoring in double figures, accounting for 73 of their 79 points.

Luxembourg was led by 30 points from Kamil Rychlicki, including 27 kills on 64% hitting effectiveness. He leads all outside hitters with 81 points so far in the tournament – 13 better than his next-closest colleague at that poisition.

“It was a difficult win,” stated Slovakian coach Miroslav Palgut afterwards. “We had a very good attack in the opening set, but Greece had a great defence. This tournament is very heavy, 5 matches in 6 days. Tomorrow we will have chances against the Netherlands, we will see.”

Slovakia out-blocked Greece 13-5 in 5 sets, including 4 from Peter Ondrovic, which were his first 4 blocks of the tournament (he’s only played in 3 of Slovakia’s 4 sets). After no blocks in the 1st set, the Slovak defense built to a peak of 6 in the 4th set alone.

That defensive effort helped them overcome 34 points from the tournament’s leading scorer: Mitar Tzourits of Greece. All 34 of his points came on kills, with a 52% execution rate.