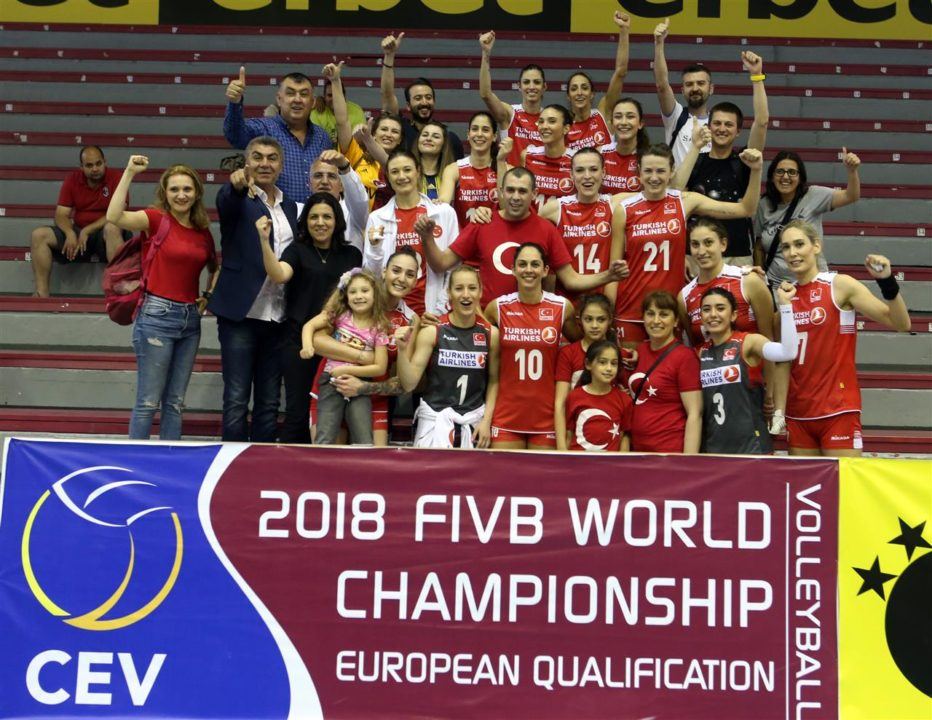 No. 5 Turkey cruised to a sweep of Montenegro to solidify its spot atop Pool C and an automatic berth in the World Championships. Current Photo via CEV Volleyball

Turkey punched its ticket to the 2018 World Championships with a 3-0 sweep of Montenegro, while Bulgaria secured the second place spot in Pool C with a sweep of Kosovo. Romania ended its time at the European qualifying with a four-set win over Romania.

Turkey trailed briefly at the start of Sets 1 and 3, but easily got past Montenegro with a 54 percent hitting effort, eight blocks and eight aces. The Turkish side won 25-16, 25-13, 25-19 to stay perfect in pool play and claim the Worlds berth.

“Now I can relax,” Turkish coach Giovanni Guidetti said. “We did it! It was a really tough week for us here. It was a tough job to do. This result is very important for us. Now we can just focus on the European Championship. This is the best beginning of the season we could have asked for.”

Nikoleta Perovic put up 11 points, including a match-high 10 kills, for Montenegro.

“Congratulations to Turkey on their qualification to the World Championship,” Montenegro coach Dragan Nesic said. “They delivered a very good performance throughout this tournament. Today we played well, without any pressure and we made some good things on the court, especially in reception where we struggled in our previous matches. Now we know in which aspects of the game we must work in the future.”

The Swiss took the first set with help from four blocks and three aces, but could not slow Romania in a trio of near start-to-finish wins the rest of the way.

“For sure this is the best way to finish the tournament,” Romanian captain Adina Salaoru said. “This victory is really important for us even though we didn’t qualify to the World championship. It is a matter of honour for our country, so we just tried to represent Romania in the best way we could.”

The errors piled up for Switzerland to the tune on 29, including 11 in Set 2 alone. The Swiss hit 36 percent to Romania’s 42 percent effort, but outblocked them 7-5 and served up six aces to just two for the Romanians.

Bulgaria kept hope alive for a World Championships berth with a 25-8, 25-13, 25-10 sweep of Kosovo to sew up the second place spot in the group and advance to the third round of European qualifiying.

“We are not pleased with the result from yesterday’s game with Turkey,” Bulgaria’s Miroslava Paskova said. “We were really close to the victory but this is what happens in sport. We will make it to the World Championship through a longer, more difficult path. This is our goal and we will not give up!”

It took just 59 minutes for the hosts to dismiss newcomer Kosovo, which dropped all five of its matches at its first international competition, falling in straight sets in each.

The Bulgarians outblocked Kosovo 8-2, outserved the opponents 9-2 and hit at a 54 percent clip in the win, despite utilizing its second lineup.

“It is always hard to play against the hosts, furthermore Bulgaria has a really good team despite the fact that today they played with their reserve players,” Kosovo coach Lorik Ilazi said. “For us this tournament is something precious. We played five matches in a row against strong teams. It was a great experience and it brought some unforgettable moments because it was our first international tournament. So we must analyze all matches and we must train harder to become a better team!”