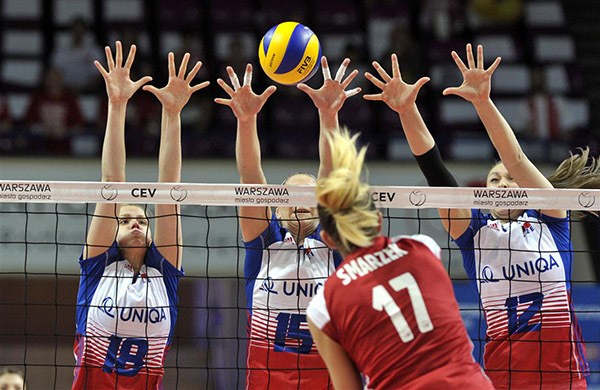 Serbia remained undefeated in women’s Pool B, but Poland could not hold home court, falling to Czech Republic in five sets, dropping to second in the standings heading into Sunday’s finale in Warsaw, Poland.  Current Photo via CEV Volleyball

Serbia remained undefeated in women’s Pool B, but Poland could not hold home court, falling to Czech Republic in five sets, dropping to second in the standings heading into Sunday’s finale in Warsaw, Poland.

Cyprus led the first set nearly throughout thanks to three aces and seven Iceland miscues. Iceland turned the tables, leading by as many as nine at 21-12 in Set 2, but Cyprus bounced back for the 26-24 win in part due to five blocks. Cyprus overcame an early deficit in Set 3, but came through for the 25-21 win and the match with help from 12 Icelandic errors.

“It was an important match because Cyprus are also from the Small Country Division, but they had more time to get to know this competition,” Iceland coach Daniele Capriotti said. “We are going to face off next week at the Games of the Small States and our Small Countries Division finals. Being that type of team, we sometimes have to watch things with the eyes of a child and try to learn as much as we can from this experience.”

Serbia crushed 63 percent of its offensive shots to the floor, served up nine aces and dominated the net, outblocking Slovakia 12-2 in a 25-8, 25-14, 25-18 win. Tijana Boskovic guided the ship with 20 points, including 16 kills and three blocks. Brankica Mihajlovic followed with 12 points, with 10 kills.

Slovakia dominated Set 1, jumping out to an 8-1 lead and boosted the edge to 16-3 and 21-4 en route to the 25-8 win, with help from four aces and three blocks. Five more aces and five blocks guided Serbia to the 25-14 Set 2 victory. Set 3 featured 18 Serbian kills and four stuffs.

“Playing against a weaker team than us is always tricky because we have to stay focused and they have nothing to lose,” Serbian libero Jelena Blagojevic said. “Our goal is obviously a direct pass to the World Championship so I think that we did a great job today and also before – staying really focused from the start till the very end of the match.”

The Polish squad had victory in its grasps, leading 8-2 in a decisive fifth set, only to watch it slip away as the Czech Republic came back to grab a 15-10 win and virtually steal away Poland’s World Championship bid hopes.

It was back and forth match from the start. The Czechs led 16-14 midway through Set 1, but fell just short in a 35-33 decision. The Czechs held Poland to a 14 percent hitting effort in Set 2, dominating in a 25-14 win. Three aces and three blocks helped lift Poland to a 25-14 Set 3 victory. The Czech Republic put down 15 kills and added five blocks in a 25-22 win to level the match. Poland scored the first five points of Set 5 and led 8-2, before watching it evaporate into a 10-8 deficit. The Czechs put up three stuffs in the final stanza and held Poland to a seven percent hitting effort en route to the upset.

“That was a match full of emotions and a really important one for us,” Czech Republic’s Aneta Havlickova said. “Both Poland and us played a good game, but we did the impossible. Such things as going back from 2-8 happen rarely in women’s volleyball. Sometimes it’s just like this – you are leading and the next moment you are down. For our coach it’s always important that we play as a team, as one. That was the key today.”

“I think we are a group of girls really able to show a lot and we want it really bad, but all this wanting can also have an opposite effect, like in this ending here,” Poland’s Martyna Grajber said. “We fought but just not in the tiebreak, which ended as if we weren’t there. It shows that we still have a lot to learn.”