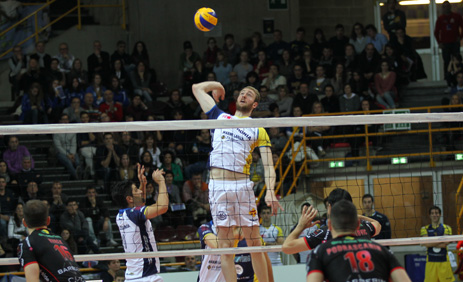 Zingel has led A1 in blocking for the last 5 seasons, while also hitting at a 61% clip Current Photo via http://www.legavolley.it/

Italy’s Castellana Grotte New Mater has announced in its official website the signing of Australian national teamer Aidan Zingel to its roster. One of the best middle blockers to play in Italy’s professional league in the past decade, The 28-year-old Zingel is transferring out of Trentino, after spending his first seven seasons in Italy with Verona. He will be the first Australian to ever wear Castellana’s jersey.

Zingel has led A1 in blocking for the last 5 seasons, while also hitting at a 61% clip. He was awarded as the best middle blocker of the league in the 2015/16 season. At the international level, he has amassed 187 caps for Australia’s national team, including a participation at the 2012 Olympic Games.

“For me it will be a totally new and fascinating experience. It ‘s my first trip to the south of Italy and I know there’s plenty to discover. I know what awaits me. I’m ready to start this new adventure. Although last season with Trentino wasn’t what I expected, sport gives you many special situations that still make you grow, I’ve learned so much and I think I’ve taken a step forward in my career. We are a team that has a good balance between experience and youthful enthusiasm. Since we are a completely new team, we must immediately look for a good chemistry in the gym.It will be the first thing to work on.”

After a 2017-2018 season that saiw it finish in last place in the Italian SuperLega with just 3 wins and 10 points, New Mater made sweeping changes to its lineup this off-season. Besides Zingel, here is a list of the team’s new signings: