New Uniforms, New Banner, and a Victory for the Jayhawks 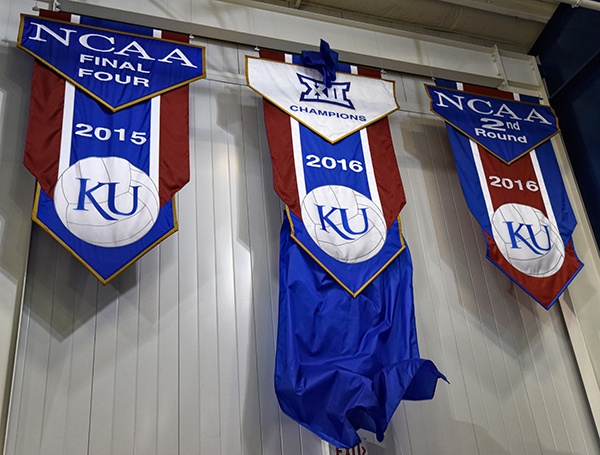 Last year, the University of Kansas won their first Big 12 volleyball championship. Returning the core of that same team, the Jayhawks unveiled their new uniforms and their Big 12 champions banner in Saturday’s exhibition match.

The Jayhawks played UMKC in a four set exhibition match with the core lineup was the same as last season, with First Team All-Americans Kelsie Payne and Ainise Havili playing as opposite and setter, Madison Rigdon and Jada Burse hitting from the outside. Things looked different in the middle, with transfers Taylor Alexander and Mmachi Nwoke getting some playing time as well as returnees Kayla Cheadle and Zoe Hill. With Alexander tallying five kills, she seems to be the only lock in the middle for the Jayhawks.

Sophomore Allie Nelson boasted Kansas’s new red jersey in the libero position, playing there for three of the four sets and earning eleven digs before senior Tori Miller took over for the fourth, where freshman and backup setter Annika Carlson took over the offense from Havili.

With utility player Patricia Montero out for the season with an ACL tear, Kansas’s backrow was expected to take a hit, but head coach Ray Bechard was confident in his defense following the match. “All the defensive specialists got a shot and they did well. We held them to .063, so defensively this time of year we are a little bit ahead of where we are offensive. But overall, I’m pleased with what I saw today.”

However, the Jayhawk offense was not lacking. They hit for a .280 clip, the outside hitters swinging even better at .312. Sophomore Jada Bruse had nine kills and senior All-American Honorable Mention Madison Rigdon had eight with two aces. As expected, Kelsie Payne led the team in points scored with ten kills and two blocks. Senior transfer from Colorado, Gabby Simpson, played sparingly but registred three kills, three digs, and one block.

It is likely we will see Kansas continue to experiment with their lineup early into the season, their first game this Friday against NC State.

The recognition of Kansas volleyball‘s first-ever conference title commenced KU’s 2017 season as the 2016 Big 12 Conference championship banner was unveiled in the rafters of a sold-out Horejsi Family Athletics Center on Saturday afternoon. Eighth-ranked Kansas proceed to open the season with a four-set exhibition sweep over UMKC (25-11, 25-21, 25-20, 25-22).

Due to a new NCAA rule, Saturday marked the first exhibition match against another school in program history. Before the match Kansas head coach Ray Bechard and UMKC head coach Christi Posey – a former 11-year assistant under Bechard – agreed to play the tune-up contest to four sets regardless of results.

“I’m glad the NCAA passed this legislation,” Bechard said. “It’s so big for us. UMKC came over and it didn’t cost anybody hardly anything, but you get the feel of a real-live match against another opponent. We could have done a Crimson vs. Blue inter-squad scrimmage, which would be competitive, but today had a great gameday feel to it and that’s hard to simulate.”

The Jayhawks rode the wave of their home crowd to pounce early on the Kangaroos to dominating leads of 12-2 in the first set and 14-4 in the second set. KU ended up holding the Roos to a .063 hitting percentage for the match. Senior All-American right-side hitter Kelsie Payne led Kansas with 10 kills, while senior All-American setter Ainise Havili recorded a team-high 12 digs and set the pace for the offense with 38 assists.

Kansas graduated two starters from its 2016 conference title team that was recognized on Saturday – libero Cassie Wait and middle blocker Tayler Soucie. Fans got a glimpse of the future as sophomore Allie Nelson wore the libero’s off-color jersey for the first time and senior graduate transfer Taylor Alexander started at middle blocker in her Jayhawk debut.

“I thought Allie Nelson did a really nice job at libero when she was in there,” complimented Bechard. “All the defensive specialists got a shot and they did well. We held them to .063, so defensively this time of year we are a little bit ahead of where we are offensive. But overall, I’m pleased with what I saw today.”

Nelson finished with 11 digs while captaining the defense for three sets. Senior Tori Miller subbed in the fourth set as the primary libero.

“I feel more comfortable that I did last year,” Nelson said. “The team has been really good about having confidence in me. We have four great defensive specialists on this team and every day is a competition. They have pushed me to be a better player and I hope they can say the same about me.”

KU’s pin hitters were firing on all cylinders, led by sophomore Jada Burse‘s nine kills – including two on set point – and senior All-American Madison Rigdon‘s eight kills and two aces. Both outside hitters swung for a .312 hitting efficiency.

In addition to Alexander’s starting lineup debut of five kills on a .375 clip, four other Jayhawk newcomers made their on-court introduction to fans at Horejsi on Saturday.

Freshman setter Annika Carlson subbed in for Havili in the fourth set to lead KU’s offense to a 25-22 victory to close out the match. The Olathe, Kansas, native registered four assists, three digs and one kill in her debut. Sophomore middle blocker Mmachi Nwoke played three sets with two kills and two blocks, redshirt freshman Jacqui Mostrom played in two sets with one dig, and versatile senior transfer Gabby Simpsonregistered three kills, three digs and one block in the fourth set.

UP NEXT
Kansas opens the 2017 regular season at the Wolfpack Invitational on Friday, Aug. 25 against NC State. The following day, the Jayhawks have a doubleheader against Missouri State and a second match against host NC State. Coverage of KU’s opening weekend can be heard on KUAthletics.com/radio. The KU-NC State matches will be video streamed on ACC Network Extra via WatchESPN.com or the ESPN app.

UMKC volleyball unofficially kicked off its 2017 campaign with an exhibition contest on Saturday afternoon at the Horejsi Family Athletic Center against No. 8 Kansas.  In the match, the Roos fell 4-0 to the Jayhawks despite 10 kills, seven digs and two blocks from sophomore Alicia Harrington (Cedar Falls, Iowa).

“Today’s exhibition gave us a great opportunity to see where we need to improve,” head coach Christi Posey said.  “For the most part, we were pleased with ball handling and defense.”

The Roos started slow in the first two sets, falling 25-11 and 25-12, but came back strong in set three.  In the set, KU jumped ahead 3-1, but back-to-back kills by Dyer and Alexia Morey(Colorado Springs, Colo.) knotted the match at 6-6.  A Jayhawk error gave UMKC its first lead of the set at 9-8, while three points later a kill from Mykal Sadler (Des Moines, Iowa) pushed the lead to 11-9. Kansas rallied to reclaim the lead, but two straight kills from Dyer and Alex Ratzlaff (Hillsboro, Kan.) retied the match at 16-16.  The Roos, however, would get no closer as KU held on for a 25-20 victory.

In the fourth and final set, UMKC once again battled the No. 8 team in the country as the Roos trimmed a 10-point deficit to two at 24-22 with a 12-2 run that featured four kills from Harrington and was capped by kill from Sadler.  Kansas, though, would hold off the Roos’ late comeback attempt, taking the set 25-22.

As a team, the Roos finished with 33 assists on 37 kills with nine blocks and 32 digs.  Individually, Sadler finished the match with five blocks and six kills.

The Roos will be back in action again on Friday when they open regular season play in Clarksville, Tenn., to take part in the Culvers Governors Challenge. UMKC begins play on Aug. 25 against Middle Tennessee State at 10 a.m. CT, while taking on host Austin Peay later in the day at 3 p.m. CT. UMKC closes out the tournament on Saturday when they face Marshall at 11:30 a.m. CT.