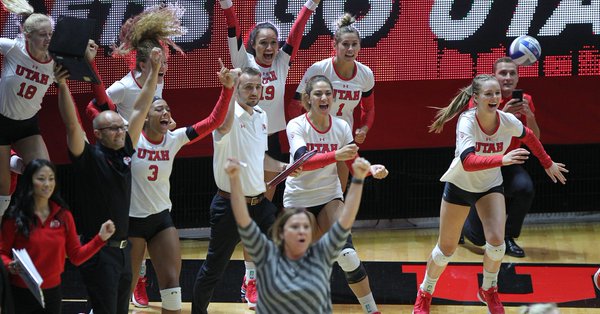 The Utes started Set 5 on a tear, going ahead 7-3 including a pair of Trueman putaways. San Diego countered with a 6-0 run with two Wiblin kills and two Utah miscues. Down 10-8, Utah rallied with five of the next seven points, including a trio of Anae kills to go ahead 13-12. A Kennedy kill knotted the score at 13-all. An Oblad kill gave a match-point try at 14-13. Edwards answered to keep the match going. Another Oblad putaway and a Torero miscue sealed the 16-14 win for Utah.

San Diego led 16-13 midway through Set 1 behind six Kennedy kills and three from Edwards. Utah scored seven of the next 10 to turn the deficit into a 20-18 lead of its own. Four USD miscues aided the Utes in the rally. The Toreros regained the lead at 22-21 after a pair of Picha kills and Ute errors. Utah closed out the win with four straight points, the last coming on a Kenzie Koerber kill.

USD recovered to open Set 2 on an 10-4 run as five players turned in kills. The Toreros upped the advantage to seven at 14-7 on a Wiblin putaway. A trio of Kennedy kills and two from Lauren Fuller coupled with a pair of Ute errors made it 22-13. A Wiblin kill gave USD a set-point try at 24-16 and Picha closed the door on the 25-17 win.

The teams split the first 20 points of Set 4 before Utah grabbed a 17-15 edge on a Barton putaway. San Diego scored three straight including a block by Kennedy and Picha to surge ahead 18-17. The teams tied at 18 and then traded points over the next eight serves to lead to a 22-all tie. USD sent the match to the decisive fifth set with three straight points, last on a Kennedy putaway.

Trueman tallied 16 kills and Barton added 15 to go along with a team-best .464 hitting percentage, while Adora Anae(19 kills) and Berkeley Oblad (10) both collected double-digit kill efforts as well.

Both teams battled to a back-and-forth match in the first set, but Utah drew first blood, taking the frame 25-22. After going up 12-9, USD countered with an 8-2 run to go up 17-14, but the Utes rallied with four straight points to retake the lead can force the Toreros to call a timeout. USD took back the lead 22-21 later in the set, but Utah managed to take the set with a 4-0 run.

Barton opened the third set with a kill and later put the frame away with her fifth kill to give the Utes a 25-19 third-set victory. Utah hit just .235 in the set, but used five total blocks and 14 digs to limit the Toreros to just a .079 hitting percentage. Utah led by as many as 11 points before a mini USD run got the Toreros back within six points. Trueman registered a block on the ensuing possession and then kills from Luafalemana and Barton ended the threat.

Utah led early in the fourth set, 6-3, but neither team would take a three-point lead or more until USD came back to win the frame, 25-22. Utah led by a point or two throughout most of the frame until a 3-0 run put the Toreros up 18-17. Utah came back to take the lead with kills from Barton and Anae, but USD closed out the set winning seven of the final 10 points to notch things up at 2-2 and send the contest into a decisive fifth set.

Utah’s 7-4 lead early in the fifth set quickly dwindled to a 9-7 deficit following USD’s 6-0 run. The Toreros pushed its lead to 10-8 before another kill from Barton notched things up at 10-10. Anae would register three straight kills for the Utes to put Utah on top 13-12 and Berkeley Oblad later put the Utes up match-point, 15-14, with a pair of kills. USD’s next attack was wide, giving Utah the win, 16-14.

Utah is back in action early tomorrow afternoon, taking on Green Bay at noon. Green Bay fell to Missouri in the first match of the Utah Classic on Friday, 3-1.

GAME NOTES
• Utah picked up its first win over a top-15 ranked team at home since downing No. 13 Oregon back on Nov. 25, 2014.
• Adora Anae notched 10+ kills for the 33rd straight game dating back to last season.
• Dani Barton collected five more kills than her previous career-high of 10 kills, which she just recorded this past Sunday at Hawaii.
• Carly Trueman‘s 16 kills were a season-high and her highest kill total since registering 20 kills against Illinois State last season.
• Bailey Choy notched her second consecutive double-double with 50 assists and 14 digs. This marks Choy’s third time to record 50 assists or more in a match.
• Utah was held to zero service aces for the first time this season.
• Anae totaled eight digs on the evening. She now has 994 career digs and is just six digs away from becoming just the 10th player in school history to become a member of the 1,000 dig club. She would also be just the fifth player to record 1,000 kills and 1,000 digs in a single career.

Jayden Kennedy (20-42) and Roxie Wiblin (17-37) both set career-highs for kills and attacks, while Kaity Edwards tied her career best with 14 kills in 25 attacks. Lizzy Tardieuhad a career-high 16 digs while just missing a double-double with nine assists. Senior setter Kristen Gengenbacher recorded her second double-double in a row with a season-high 54 assists and 15 digs.

The first set was back-and-forth with each team trading scoring runs. A 6-1 USD run put them up 16-13, but Utah responded with a 7-2 run to give the Utes a 20-18 lead. The Toreros rallied to go up 22-21, only to see the Utes finish the set with four unanswered points.

The Toreros led by as many as seven points in the second set and hit .370, their best of the evening. However, USD struggled in the third set, hitting just .079 with ten hitting errors.

USD would regroup in the fourth set, winning 25-22 despite Utah posting their best hitting percentage of the night (.324).

In the decisive fifth set, the Toreros fell behind 7-3, but rallied to score seven of the next eight points to take a 10-8 lead. The score was tied at 10, 11, 12, 13 and 14 until Utah took the last two points to win the set and the match. It was the Toreros’ first five set match of the young season.

Utah had four players with double-digit kills, led by Adora Anae’s 19. Bailey Choy had a double-double with 50 assists and a team-high 14 digs.