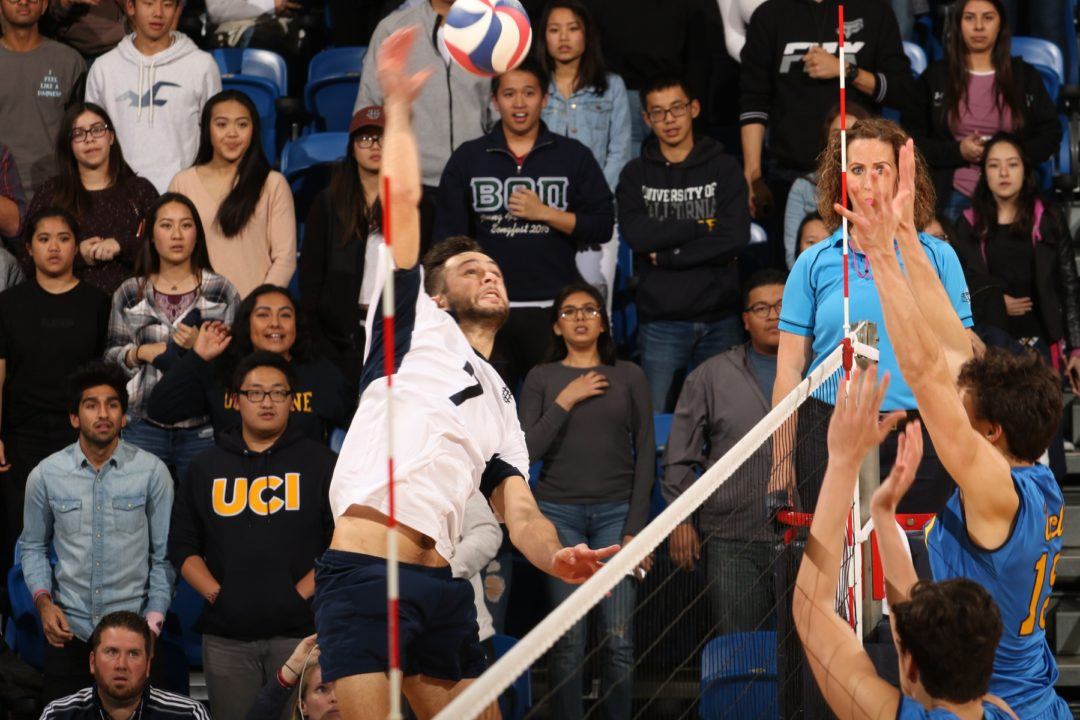 The Anteaters came back to beat No. 6 UCLA 3-1 after dropping the first set. Archive Photo via UC Irvine Athletics

An efficient offense and tough back court defense lifted No. 5 UC Irvine to a 3-1 win over No. 6 UCLA in the MPSF Quarterfinals on Saturday night.

The Anteaters hit at a .374 clip, while holding UCLA to a .279 effort on the night. The Bruins won the blocking battled 8.5 to 8 and served up four aces, while allowing none. In the backcourt, UCI pulled up 29 digs to UCLA’s 21.

Junior outside Jake Arnitz led the Bruins with 18 kills, while hitting at a .364 clip and adding a team-best three blocks. Redshirt junior middle Eric Sprague and sophomore outside Dillon Missry put down nine kills apiece. Sprague hit at a .727 clip with nine kills in 11 swings with just one error. Junior outside JT Hatch posted a team-leading six digs.

Three kills each by Koubi and six UCLA miscues put UC Irvine on top 12-10 in Set 1. The Bruins tied it up five times, the last at 17-all. The Anteaters scored five of the next seven to take a 22-19 lead. Two UCLA errors and a block by Stadick aided the run. The Bruins stole away the set, however, with a 6-1 run of its own. Three kills and two Missry/Stahl blocks lifted UCLA to the win.

The Bruins carried the momentum into Set 2, building a three-point lead at 14-11. Three Arnitz kills and a trio of UCI miscues helped UCLA to the advantage. The Anteaters chipped away, eventually tying the score at 20 on a Koubi kill and taking a 21-20 lead on a Bruin error. A hitting error put UC Irvine on the hill at 24-22 and a service error clinched the set.

Two kills and a block by Stadick gave UCI a quick 4-0 lead in Set 3. The Anteaters boosted the edge to six at 12-6 as Koubi downed a trio of kills. UCLA scored four straight and pulled within two three times, last at 14-12. UC Irvine led by five at 20-15 after a stuff by Stadick and Saeta. A service error made it 24-20 and a Saeta putaway gave UCI the 2-1 lead in the match.

UCLA took control early in Set 4, going up 12-8 with help from three Missry kills. The Anteaters tied it up five times, last at 17-all, before taking a 23-20 lead thanks to four Bruin errors. Kills by Hodges and Koubi sealed UCI’s spot in the MPSF semifinals.