Lewis Sneaks Past Lindenwood to Advance to MIVA Semifinals 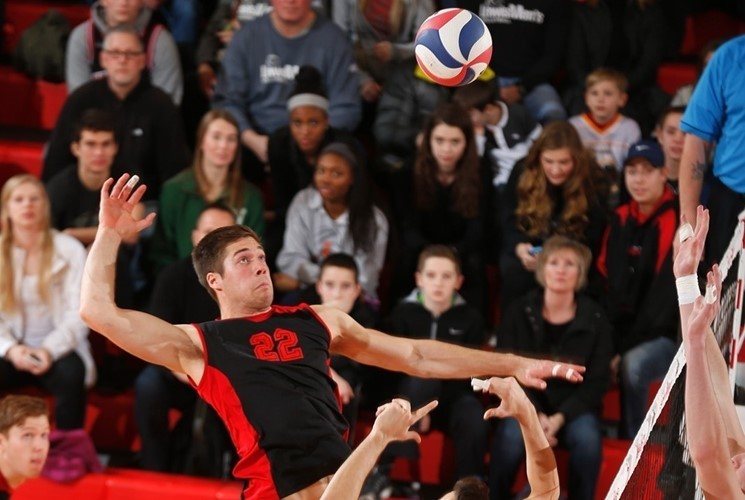 The Lewis University Flyers advanced to the MIVA semifinals with a close 3-2 victory over the Lions of Lindenwood University. After winning the first two sets the Flyers dropped the third and fourth sets before ultimately winning the fifth and decisive set, 25-23, 25-21, 25-27, 20-25, 15-11. Service errors plagued the Lions as they would commit 27.

In the first set, Lewis jumped out 3-0 before Lindenwood evened it at 4-4. Throughout the set both teams would exchange points until, at 16-16, five kills from the Lions and an error by the Flyers would put the Lions up 22-18. The Flyers used a five point service run by Schmiegelt to take the first set 25-23.

The second set would see both teams exchanging points again. Tied at 19-19, a service ace by Schmiegelt and two kills from Coenan forced Lindenwood to take a timeout down 19-22. Out of the timeout, a service error by Schmiegelt ended the run and brought the score to 23-20 in favor of the Flyers. Two more service errors from the Lions made the second set go in favor of the Flyers by a score of 25-21.

Lindenwood led for a majority of the fourth set. Tied 6-6, both teams exchanged points until the Lions found themselves on top 19-15. Koppel helped push the lead to 23-17 by contributing three kills. Two quick points for the Flyers forced a Lindenwood timeout as they would cut the lead to 23-19. An attacking error and a service error closed out the set as the Lions won 25-20.

In the fifth and decisive set, Lindenwod jumped out to a 4-1 lead. Errors from the Lions would allow the Flyers to even the score at 6-6 before a Coenan ace put the Flyers on top 7-6. Lewis never looked back and would outscore Lindenwood 8-5 in the closing moments of the set, winning by a score of 15-11.

Lewis University will now prepare for its MIVA semifinal matchup against Grand Canyon University. The first time these two teams met, GCU came out on top 3-2. However, the Flyers would win the next contest 3-2 to even the series.

Romeoville, Ill. – The No. 7 Lewis University men’s volleyball team won its ninth five-game match of the season as the Flyers picked up the 25-23, 25-21, 25-27, 20-25, 15-11 win over Lindenwood in a Midwestern Intercollegiate Volleyball Association Quarterfinal match-up at Neil Carey Arena on Saturday (Apr. 15) evening.

With the win, Lewis extends its winning streak to six and improves to 23-6 on the campaign, while Lindenwood ends its season at 5-19. The Flyers will host the MIVA Semifinals on Wednesday (Apr. 19) at 7 PM at Neil Carey Arena against a yet-to-be determined opponent.

The Lindenwood men’s volleyball team ended its season on Saturday evening in Romeoville, Ill. in a five-set thriller to No. 7 Lewis. The Lions finish with a 5-19 record for the season.

The Lions surrendered consecutive late leads in the first two sets to dig a 2-0 hole. Lindenwood edged Lewis in the third frame, 27-25, before maintaining control of the fourth set en route to the victory. The Lions jumped out to a 4-1 lead in the deciding set, but the Flyers took control to finish on a 14-7 run and advance to the MIVA semifinals.

Blake Koppel paced the Lions with 19 kills on .350 hitting. The senior also had 10 digs for the second double-double of the season.

Connor Hipelius had 11 kills, and hit a match-hit .588 in the five sets. Freshman Sam Schindler had seven kills, and also had four blocks to go along with three service aces.

Ryan Vorderer led the team with 12 digs and had a four assists. Adam Brewster dished out 46 dimes in the match, finishing the season with 40 or more assists six times. The sophomore also had seven digs and one block.

Nathan Van Dellen was second on the team with 12 kills on .280 hitting. Van Dellen was nearly the third Lion to record double-digit digs, but finished the match with nine.

Michael Chard and Nick Stevenson combined for 12 kills in the loss.

Lindenwood committed 26 attack errors and 27 service errors to Lewis’ totals of 20 and 22, respectively. The Flyers controlled net play, having 15 blocks to the Lions’ seven. The Lions attacked at a .239 clip, while the Flyers hit at a .230 rate. Lindenwood had 58 kills as a team to Lewis’ 48.

It was head coach Kris Dorn‘s final match at the helm of the Lindenwood program as he is set to move on to begin the beach volleyball program at Vanguard University in Coasta Mesa, Calif. Lindenwood also says goodbye to five seniors: Zach Biggs, Jake Duckworth, Ryan Moore, Blake Koppel, and Brian Keough.