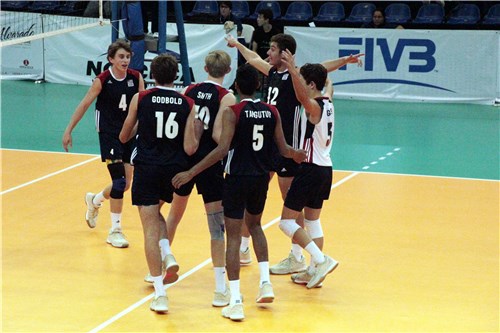 The United States Boys' Youth National Team defeated Nicaragua to move into the semifinals of the 2018 NORCECA U19 Boys' Continental Championship. Archive Photo via NORCECA

It was all red, white and blue in this quarterfinal, with the U.S. Boys’ Youth National Team dominating Nicaragua for a berth in the semifinals. It was a bit of a slow start early, but that didn’t last into the other sets as now the Americans will face Puerto Rico in the semifinals with a promise of two more matches (semifinal plus either first or third-place match). However, one more victory earns the team a bid to the FIVB World Championship in 2019.

Team USA not just had a sizable advantage in attack, but owned a decisive edge in blocking (11-0) and aces (13-2). At that point, the nine more errors weren’t an issue because they were a product of playing more aggressively and creating more points.

At the end of the action, USA had four players with double-digit points, led by Akhil Tangutur (14 points) and Joseph Deluzio (13 points). Compare that to Guatemala, whose leading scorer had just seven points in the time in the one-sided affair.

USA head coach Brad Keller: “The match started slowly because it’s the morning after that they exerted a ton of energy the night before, so coming out early morning is a bit difficult to get motivated and get going. Finally they got the rhythm; we’ve had that problem the whole tournament. We have a good deep team, some guys to help us out and we can go with any line-up, depending how fresh we are to face the semifinal.”

Nicaragua head coach Jorge Mena: “It was good match, we played well, and it was a good preparation to face our next opponent Costa Rica. We hope to have an excellent defense just like this one.”

The Costa Rican side actually outscored the Guatemalan side, but it was Guatemala coming up with the key points when it mattered most to fend off a 2-1 set deficit and win 15-13 in the fifth. The win pushes Guatemala to the semifinals to take on the top team in the event, Cuba, as they will get two more matches from here.

The block seemed like it would be the downfall for Guatemala, as it was almost the saving grace for Costa Rica with a 23-9 edge. They also had one more kill and two more aces. Instead, it was the mistakes that plagued Costa Rica, as they recorded 41 errors compared to just 28 from Guatemala.

Interestingly enough, Costa Rica had five players with double-digit points while Guatemala had just three. Guatemala did have the matches’ leader in points though with Kevin Carlos Hoil Ortega (22 points).

Wing spiker Kevin Hoil of Guatemala: “I am really excited, it was a tough battle and I must thank my team. This is a team effort and we are really glad to come and doing a good job here.”

Costa Rica head coach Juan Acuña: “Guatemala improved from the last time we faced them in Panama; they came well prepared and they fought strongly. We lacked decision in sets four and five, it’s a shame because there are many plans with this group of players.”