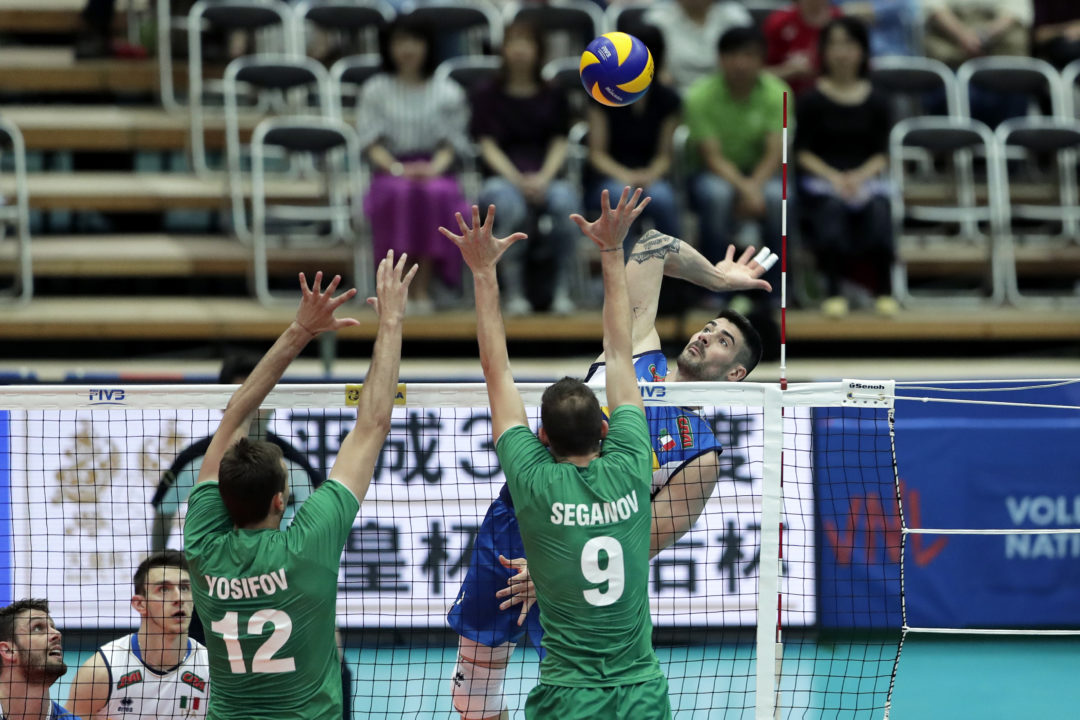 Filippo Lanza notched 20 points to pace the Italians in a four-set win, which snapped a two-match VNL skid for the team, while Poland showed its depth and bested Japan in every way to stay atop the VNL table as Damian Schulz and Bartosz Bednorz turned in all-around efforts.  Current Photo via FIVB

Filippo Lanza notched 20 points to pace the Italians in a four-set win, which snapped a two-match VNL skid for the team, which opted to leave its top two scorers Ivan Zaytsev and Osmany Juantorena off the roster for Week 3.

Lanza downed 19 kills and added a block, and had help from Gabriele Nelli (16) and Luigi Randazzo (13). Nelli tallied 13 putaways and served up a team-best three aces, while Randazzo tacked on 11 kills, a block and an ace. Enrico Cester played a key role at the net with four stuffs and five kills, while Simone Anzani managed seven putdowns and two blocks.

Bulgaria had four double-digit point scorers, but came up just short. Nikolay Uchikov paced the team with 19 points (14 kills, 5 aces), while Valentin Bratoev (13), Nikolay Penchev (13) and Svetoslav Gotsev (10) joined him in double figures. Bratoev and Penchev put together 11 kills, a block and an ace apiece, while Gotsev added seven putaways, two blocks and an ace.

Italy owned the net, leading in kills (58-50) and blocks (10-6) and grabbed 23 points on Bulgarian miscues (while committing 21). Bulgaria was better from the service line, outdoing the Italians 9-5 in aces.

Poland showed its depth and bested Japan in every way to stay atop the VNL table as Damian Schulz and Bartosz Bednorz turned in all-around efforts.

Schulz and Bednorz racked up 16 points apiece to lead the way for Poland. Bednorz downed a team-best 12 kills and added two blocks and two aces, while Schulz was a force offensively and from the service line with 11 kills, four aces and a block. Piotr Nowakowski added in 11 points, with six kills and a team-high four blocks and an ace. Bartosz Kwolek and Artur Szalpuk, who led the team on Friday, did not play in the match, while Dawid Konarski and Mateusz Bieniek played sparingly.

Japan has now lost both of its home matches thus far in Osaka with a Sunday meeting with Italy awaiting.