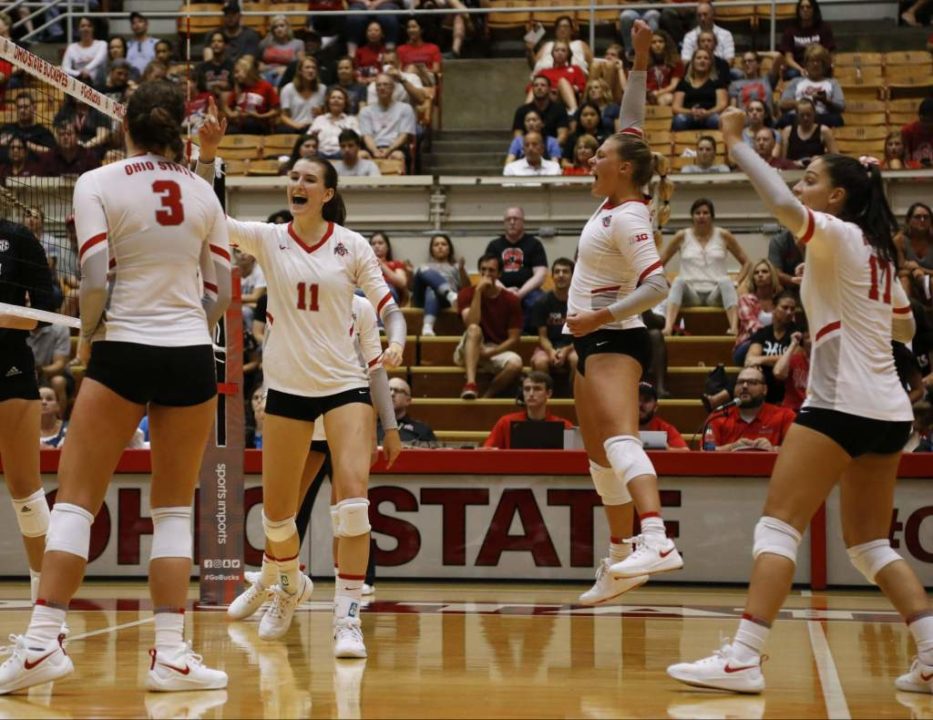 The Buckeyes have defeated the Nittany Lions twice now in the last 22 meetings dating back to the 2007 season. Both wins were earned in Columbus, Ohio. Current Photo via Ohio State Athletics

Ohio State stunned 4th-ranked Penn State on its home court, 3-1, on Sunday afternoon. The Buckeyes have defeated the Nittany Lions twice now in the last 22 meetings dating back to the 2007 season. Both wins were earned in Columbus, Ohio.

Ohio State grinds to upset the No. 4 Nittany Lions for its first B1G victory of the season!#GoBucks pic.twitter.com/erxMz8WCdD

The Buckeyes move to 1-1, rebounding from its loss to 3rd-ranked Wisconsin. With the loss, Penn State is off to an 0-2 start in the Big Ten for the first time since the 2000 season when the Nittany Lions opened conference play with an 0-3 skid. Penn State finished that season with a 30-6 mark overall, 16-4 record in the Big Ten and a NCAA Regional appearance.

Ohio State held the blocking advantage, 13 to 11, and served up 8 aces to earn the team result, despite being out hit by the Nittany Lions offensively, .180 to .135.

An 8-2 closing stretch allowed Penn State to secure the 25-16 win in the first set for an advantage in the match, but the Buckeyes responded with an 8-3 opening drive to establish control in the second set. The Nittany Lions came fighting back to tie it up, 19-all, but could not surpass the Buckeyes, who used a 5-point scoring drive to earn the win, 25-20.

The extended third set contained a string of 23 ties before Ohio State was able to edge Penn State, 33-31, with a Lauren Witte kill and attack error.

Though Penn State was able to tie the score 4 times, Ohio State never gave up its lead in the fourth set to secure the upset with a 25-23 victory.