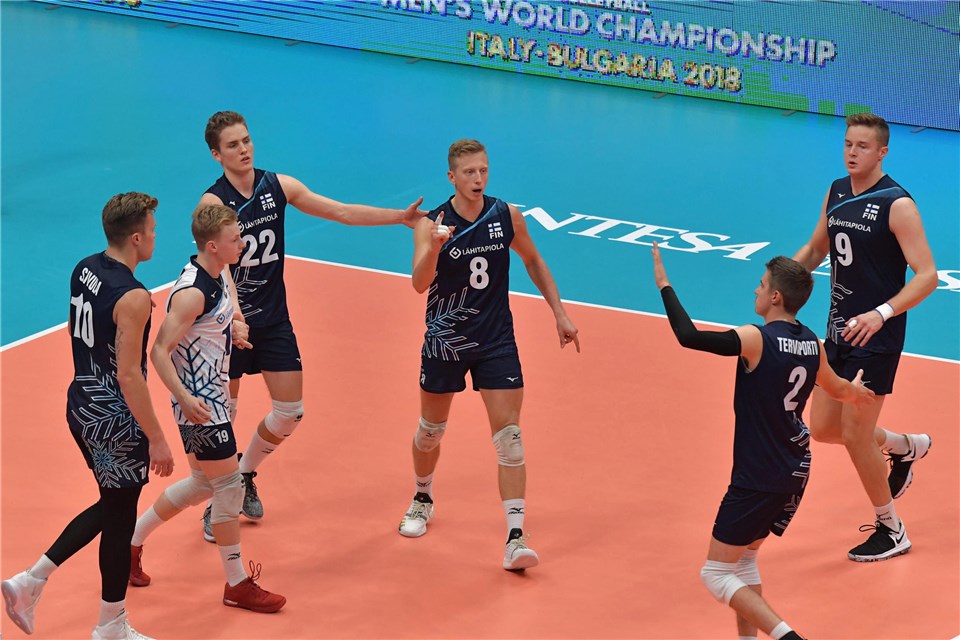 Although Finland will not be moving on to the FIVB Men's World Championship Final Six and lost all three of its Round 2 matches, spirits are high as the team celebrates its accomplishments and looks to the future. Current Photo via FIVB

Although Finland will not be moving on to the FIVB Men’s World Championship Final Six and lost all three of its Round 2 matches, spirits are high.

“To be here in Milan is already an incredible result for us,” head coach Tuomas Sammelvuo said. “It was already an honor to qualify for the World Championship and it was out of our dreams to reach the second stage. I am very happy of how my team performed, especially the young players that in this match (against Russia) really did a wonderful job. We achieved such results with great sacrifice and I hope my country will recognize this and give more attention to volleyball.”

“We have a young team, and many of these young players could be the superstar of the future, since some of us have probably played their last games, and this makes me happy,” Sivula said after the team’s final match. “I think we did well in this tournament even though, at times, we could have done better. To be amongst the top 20 teams in the world is already incredible and everyone is happy about this.”

As the 30-year old Sivula mentioned, a few of the players are aging.

Younger players who saw time for the team against Russia were Niko Suihkonen (19) and Niklas Breilin (19). Breilin started at libero in the team’s finale. Henrik Porkka (20) also was on the team’s World Championships roster.

In the second round, Finland faced two of the top five teams in the world in Italy and Russia and the always dangerous Dutch team.

The 18th-ranked Finns did manage to take a set off of the Netherlands on Saturday earning compliments from Dutch coach Gido Vermeulen.

“Finland, in the second set, gave us a bit of a headache with their good serves, but we were able to regain confidence,” Vermeulen said.