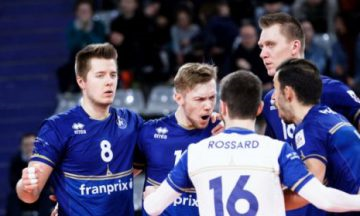 On March 22, the National Directorate of Support and Management Control (DNACG) announced it had rejected Paris Volley's appeal regarding suspension from the Ligue A playoffs.  Current Photo via Paris Volley

On March 3, the French Commission announced that Paris Volley would not be allowed to participate in the Ligue A playoffs due to financial oddities which were revealed in a league audit.

The audit showed a $460,000 euro difference between the declared payroll of the team and that added up by the CACCP.

The team’s president Michel Rougeyron called it a “bookkeeping problem” and said the team would appeal the suspension.

On March 22, the National Directorate of Support and Management Control (DNACG) announced it had rejected the team’s appeal not only for the financial mismanagement, but “due to a violation of fairness and providing inaccurate information to the DNACG.”

The team has one more shot at an appeal, addressing the French National Olympic and Sports Committee (CNOSF).

While ousting from the playoffs may be Paris Volley’s most pressing concern, the team also may be relegated to the lower league at the end of the season due to the French Commission’s initial decision. That sanction will be decided in June.

Paris Volley is one of the most successful French clubs, having won the league’s gold medal nine times and reached the medal round in 12 of the last 17 years. The club currently ranks third in Ligue A standings with 39 points, behind Tours and Chaumont.