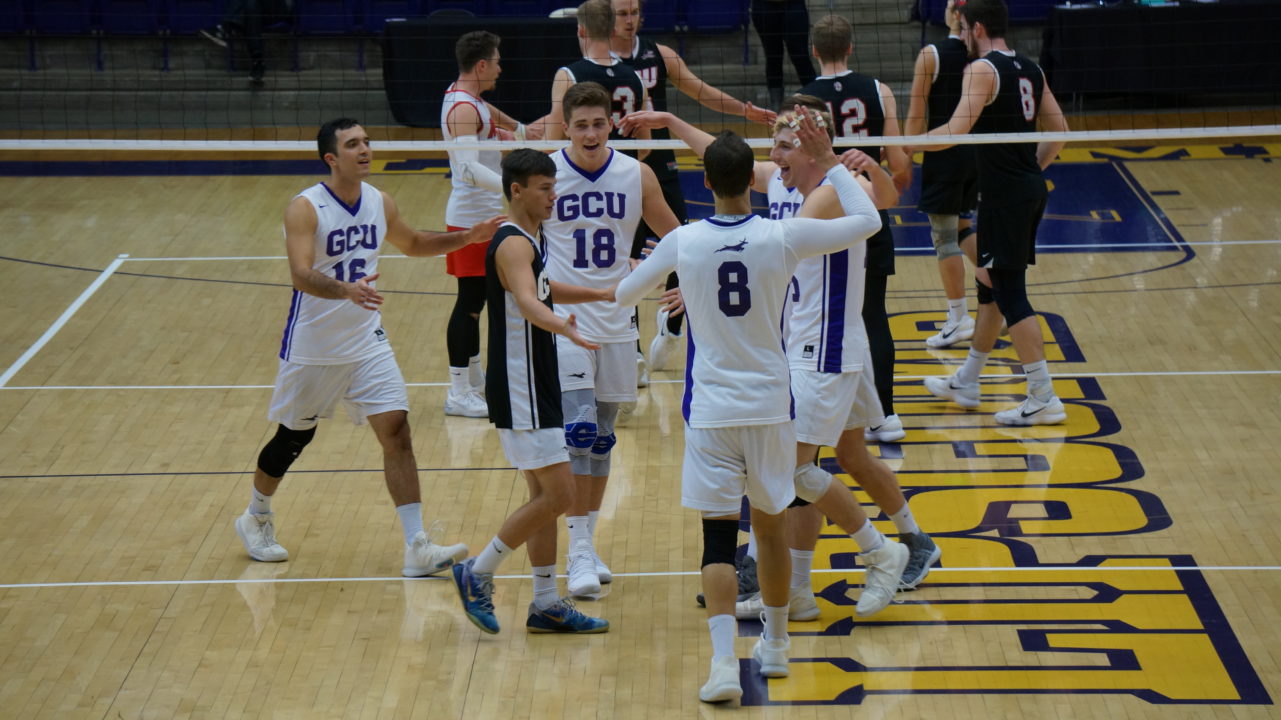 The Lopes defeated the Eagles in their lone match of the weekend. Archive Photo via GCU Athletics

PHOENIX, Ariz. – The GCU Lopes hosted the Concordia-Irvine Eagles on Friday night, and the Lopes pulled off the win in Antelope Gymnasium after losing their last two matches. Both teams are playing for the fourth seed in the conference tournament, and after the match, the teams have each taken a match from the other.

Leading the GCU offense was senior outside hitter, Cody Williams, with 16 kills on a .158 clip. Ashton King also had an impressive offensive performance with 13 kills on an .857 hitting percentage. Setter Zachary Melcher ran the offense with 39 assists and added two digs.

Concordia was led by Raymond Barsemian (.297) and Jonathan Predney (.280) with 15 and 12 kills, respectively. The Eagle offense was held to a .231 clip. Setter, Chandler Gibb, delivered 38 assists and added eight digs and three kills.

The Lopes will return to play on Thursday night where they will travel to northern California and face Stanford. The Eagles will remain in Arizona where they will take on Benedictine Mesa and Ottawa University AZ on Saturday morning.

“Any MPSF win is a great win.” Commented head coach Matt Werleafter the match. “Unfortunately we did not take care of the match in the fashion that we needed for tie-breaking protocol (if it comes to that) for playoff seeding.”

The Lopes needed a sweep and a wider point differential to put the tie-breaking scenario in their favor. However, a win helps GCU either way due to a tight race in the MPSF standings with a home playoff match on the line.

On the scoresheet, GCU led in every category except aces in which the two sides tied with four. 59 kills, 15 blocks, 56 assists and 38 digs helped the Lopes secure their third conference win. GCU hit at a .310 mark for the match and above .400 in two sets while holding the Eagles to a .231 match total.

Cody Williams and a combination of middles led the way for the Lopes. Williams led all players with 16 kills, three aces and seven blocks while adding seven digs. Caleb Blazer had a career night setting a new high in kills with 10 to go along with seven blocks and a .714 hitting percentage. Ashton King teamed up with Blazer in the middle and added 13 kills with just one error hitting to the tune of an .857 percentage in addition to five blocks, one solo. Will Schwobwas two kills away from his third double-double of the year, recording eight and 14 digs to lead the Lopes defense. Zachary Melcher joined in on setting career highs as he was good for 39 assists in just three sets.

“Our middles were unstoppable.” Added Werle. “CUI hit some nice serves down the line but when they served the meat of the court, our serve receive took care of the ball. Will Schwob was huge for us defensively. His play was selfless and he executed what we have been preaching in practice.”

The first two sets had GCU primed for a sweep, hitting at .312 in the first and improving to .462 in the second. In set number one the Lopes did not trail and kept the pressure on the eagles, using a couple of scoring runs to pace the offense. A 3-0 run fueled by kills from Williams and Schwob was topped off with a Williams ace to end the set, 25-19 in GCU’s favor. The second set was closer as the Eagles fought to tie the match at 15 but the Lopes would fail to trail again and used precise hitting to take the set 25-21 and a 2-0 match lead.

The third set saw the home team trail for the first time as Concordia jumped out to a 3-0 lead. Both sides fought to take an advantage with the lead changing four times until the score was deadlocked at 15. Concordia would go on to score 10 of the next 16 points to take the crucial set, 25-21.

GCU responded in a big way, getting out to a 3-0 lead in the fourth set only to see the Eagles respond and take a 7-6 lead for themselves. After a brief tie, Williams landed a kill and teamed up with Blazer on a block to give GCU the advantage once again. As fate would have it and as is expected in MPSF play, the Eagles did not go down quietly. The visitors rallied to take a 17-16 lead, looking to force a fifth set. Ashton King put a stop to that notion, landing two kills and pacing a 4-0 Lopes run. With the lead in hand, Blazer landed two kills, Williams served up an ace and Blazer put an end to the match with his decisive tenth kill.

Knowing what was at stake, Werle added, “We must outwork and outsmart our opponents to give us a chance to win. We have started to eliminate mental mistakes, but that third set will haunt us if it comes to a tie-breaker with Concordia at the end of regular season.”

The Lopes will hit the road again after the short one match week at home. GCU faces their toughest road trip yet in terms of travel, flying to Stanford on Thursday followed by a flight to BYU on Saturday. MPSF seeding is on the line with the matches starting at 7 p.m. and 8 p.m. (MST) respectively.

Raymond Barsemian was effective for the Eagles, leading with 15 kills and collecting five blocks. Hunter Howell hit .417 with six kills and had a team-high six blocks. Distributing the offense was Chandler Gibb with 38 assists and tied a team-high eight digs with Jacob Weiser.

Grand Canyon took a lead early in the first set going ahead 11-7. Concordia closed the gap with a 3-0 run from a Howell kill and back-to-back Eagle block to make the score 15-14 GCU. The Lopes would then gain separation, but Jonathan Predneyput down a kill to stay within three, at 21-18. Predney tooled the block to keep Concordia in the set and Grand Canyon responded with the final three points to earn their first set of the season against the Eagles.

A kill by Taylor Falduti kill and two GCU errors put the Eagles up early 3-2. Howell and Barsemian collected kills but CUI was still behind 9-7. Predney hammered a swing down the line and tooled the block while Barsemian put away a ball to even the set up at 15-15. The Lopes began to run away, going ahead by five at 23-18, then Falduti earned a kill and followed with an ace. Predney fought off a set point with a kill then Grand Canyon sided-out to take the 2-0 lead.

Momemtum shifted in the favor of Concordia in the third set, going ahead 3-0 after two Falduti kills and a Grand Canyon hitting error. Both teams battled and sided-out until CUI earned a two-point lead late in the set. Up by three, Concordia sent back a Lopes attack by ways of a Parker Maki solo block. The Lopes sided-out and the Eagles responded with a put away from Howell to stay alive in the match.

Down early 3-0, Barsemian had two kills and Predney served an ace to even up the fourth set. Grand Canyon was up 13-12 and Concordia took the lead with a 5-1 run from aces by Isaiah Kaaa and Barsemian. The Lopes fought their way back and ended up with a late three-point lead at 21-18. With the match on the line, Barsemian tooled the block to stay alive but a kill from the GCU middle ended the match.

Next Up: Concordia will remain in Arizona where they will face Benedictine Mesa on Saturday at 9 AM and follows with another match against Ottawa University AZ at 11 AM.