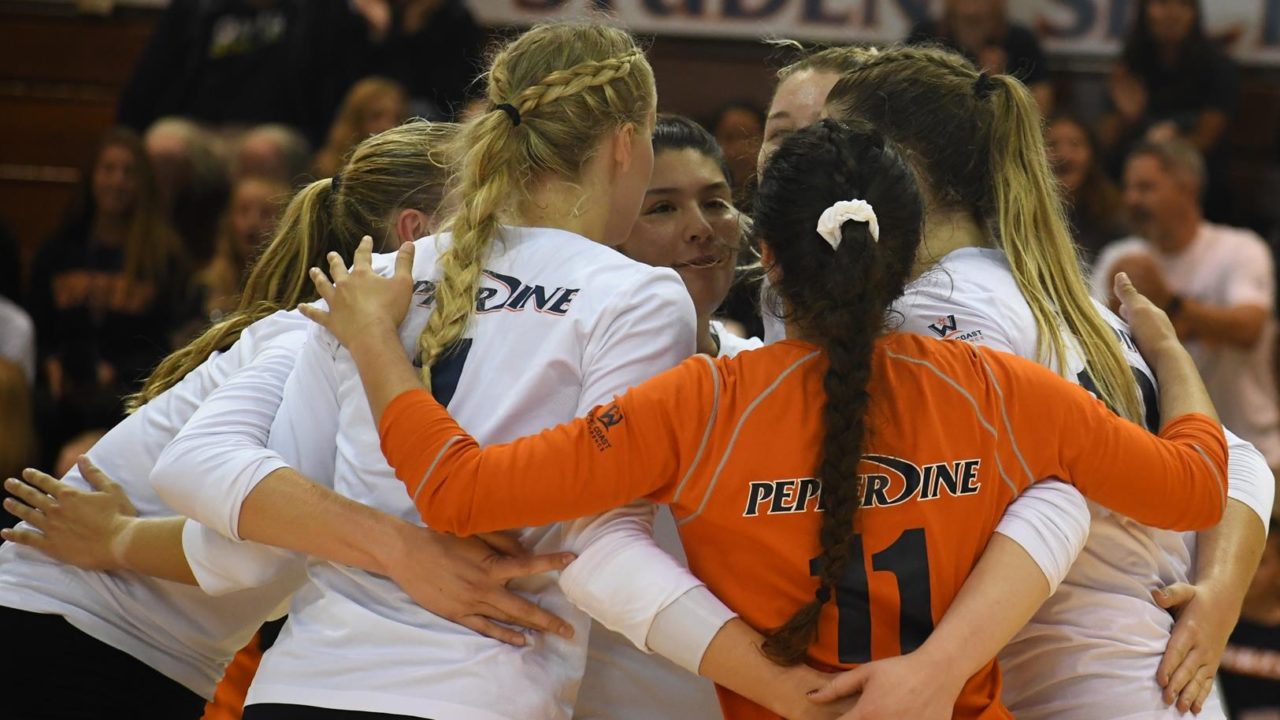 The Pepperdine women's volleyball team returns to Malibu this week to host Santa Clara and San Francisco in a pair of West Coast Conference matches on Thursday and Saturday respectively.  Current Photo via Pepperdine Athletics

MALIBU, Calif. — The Pepperdine women’s volleyball team returns to Malibu this week to host Santa Clara and San Francisco in a pair of West Coast Conference matches on Thursday and Saturday respectively.

The Waves are now tied for 3rd place in the WCC standings, while the Dons and Broncos rank 9th and 10th in that order.

SPLASH ZONE — Pepperdine has introduced a new student fan-experience for all home weekday volleyball matches with the Splash Zone.  The zone will be located behind the service line in between the lobby and court.  All Pepperdine students are able to stand-in and support the Waves’ teams in a rowdy new experience.  Anyone in the Splash Zone will also be first-eligible for that events giveaway.

DIG PINK — Saturday’s match will be a DIG Pink event and the Waves will pair up with Pepperdine Colleges against Cancer (PCAC).  There will be tabling in the lobby and giveaways.  The Waves will be wearing pink uniforms, bows and more to show their support of breast cancer awareness.

SQUAD GOALS — With a 7-1 record to open West Coast Conference play earlier this season, the Waves opened league action with the best record since 2011.  In that year, the team went 15-1 overall to win the title outright, and kicked things off with a 13-match winning streak to start.

As a team, the Waves rank in the top-35 of three statistical categories: 21st with 1.63 aces/set, 28th with a 0.259 hitting percentage and 32nd with 12.97 assists/set.  Blossom Sato and Hannah Frohling rank in the top-35 of one statistical category apiece with Sato ranking 26th with 11.07 assist/set and Frohling ranking 31st with 0.44 aces/set so far this season.  Altogether, five players rank in eight different categories this week.

PLAYMAKERS — Blossom Sato is Pepperdine’s primary playmaker, ranking 26th nationally with 11.07 assists/set.  She has dished out 742 total assists this season thus far, while ranking fourth on the team with 15 total aces for 0.22 aces/set.  She also has helped her team to 13.70 kills/set and a .259 success rate on the offensive, which both rank nationally.  She has marked 0.34 kills/set and 2.16 digs/set.

CAN YOU DIG IT? — Hana Lishman has started in the libero position in all matches this season, totaling 243 digs for 3.63 digs/set. She has also added 50 assists for 0.75 assists/set and 14 aces for the Waves.  In her three-year career thus-far, Lishman has amassed 1107 total digs in 291 sets played.  In her first match this season, she was solid in the back line with 26 digs, while against Santa Clara in the middle of the season she posted 21.  In 14 matches this season she has marked double-figure digs with two over the 20-dig mark.  Madison Shields and Jaiden Farr have also entered matches for defensive support, amassing 1.21 and 0.91 digs/set respectively.

LAST WEEK, TODAY — The Waves had a tough pair of road matches last week, falling in straight sets to both San Diego and top-ranked BYU.  San Diego is currently in second place in the WCC, while the Cougars rank atop the standings as well as the national poll.

Against San Diego, Pepperdine amassed 35 kills on a .189 success rate, with four aces, 33 digs and 4.0 blocks.  The Toreros were good for 44 kills on a .400 clip, with five aces, 41 digs and 5.0 blocks.  Rachel Ahrens led the squad with 11 kills on a .214 output, while adding an ace and four digs.  Each Hana Lishman and Shannon Scully amassed 10 digs apiece, with Lishman picking up three aces and Scully adding seven kills.  Hannah Frohling amassed eight kills with two blocks, while Alli O’Harra was good for three blocks and Tarah Wylie tallied five kills.  Blossom Sato led the team with 31 assists in the match.

At BYU, the Waves totaled 26 kills on a .035 clip, with two aces, 40 digs and 4.0 blocks.  The Cougars posted 45 kills on a .371 output, with four aces, 55 digs and 8.0 blocks.  Frohling led the Waves with nine kills and added an ace and three digs.  Scully posted five kills with 12 digs, while each O’Harra, Wylie and Heidi Dyer posted four kills.  Lishman led the team with 13 digs and Sato was good for 20 assists, five digs and three blocks.  O’Harra also added three blocks with one solo rejections.

THE COMPETITION — Pepperdine leads Santa Clara with a 41-33 overall record against since 1982 when the Waves won a 2-0 match on a neutral court.  Each team has gone on small winning streaks here and there with the Waves holding the longest at seven-straight from 1985-88.  Each team has collected six-straight wins at least once, with Pepperdine accomplishing this three times and Santa Clara twice.  In the last two seasons, the Broncos have posted a 3-2 record against the Waves, including two wins las season with a five-set and four-set win charted.  This season, the Waves swept the Broncos on the road.  SCU is currently 6-16 overall and 1-9 in WCC action to put the team in last place in the league standings.  Last week, the Broncos won the team’s first WCC-match with a four-set win against Pacific to break a nine-match losing streak.  In the final match of last week, Santa Clara was swept by Saint Mary’s.

The Waves lead San Francisco all-time with a 60-7 overall record since the 1985 campaign.  In the first match, Pepperdine won 3-1 and then the Waves continued on to 16-straight before the Dons won their first match against in a 1993 five-set brawl.  The longest Waves’ winning streak against USF came from 1993-2007 when Pepperdine won 29-straight including 19 by straight-set decisions.  Currently, the Waves are on n eight-match winning streak with a pair of sweeps in the 2017 season and a four-set win this season.  This season, the Dons are in 9th place in the conference with an 8-13 overall output and a 1-9 WCC record.  Last week, USF lost in four to both Saint Mary’s and Pacific and the Dons are currently on a nine-match losing streak.