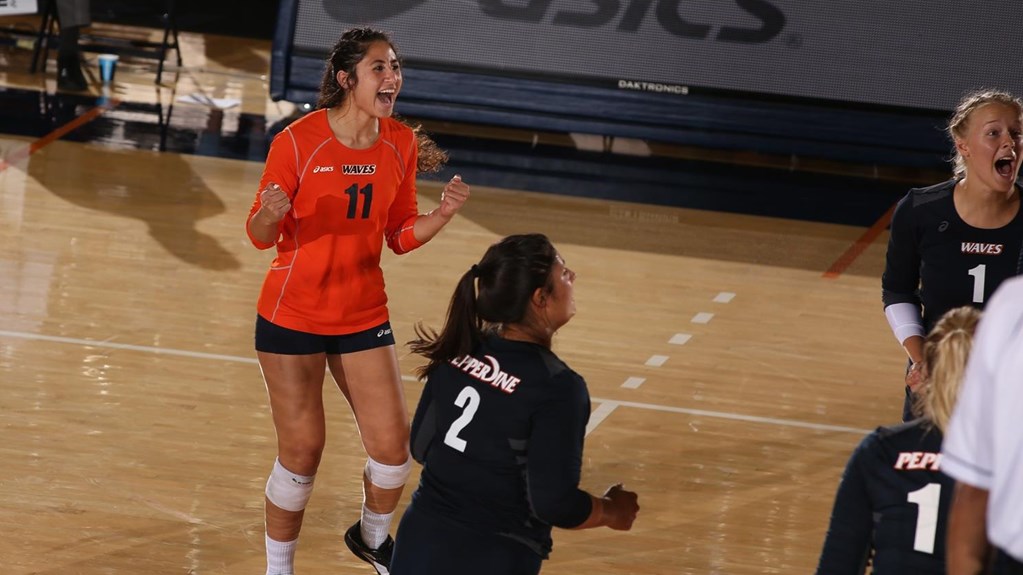 For the tournament, only the match against Texas A&M will have a live broadcast.  The other two matches will only have live stats available.  All home matches will stream live on TheW.tv.  Direct links for all matches, including live statistics can be found on PepperdineWaves.com.

Tarah Wylie and Alli O’Harra have been the main managers in the Malibu Roofing Company, amassing 0.67 and 0.76 blocks/set respectively.  Wylie has tallied 2.24 kills/set on a .378 hitting percentage, as well as 14 blocks including two solo rejections.  O’Harra has posted 2.10 kills/set on a .294 output, along with 16 blocks including two solos.  Ahrens and Frohling have also reached the double-figure block mark for the season.  Rosie Ballo has also spent time in the middle this season, amassing 1.00 blocks/set for the Waves.

Blossom Sato is Pepperdine’s primary playmaker, ranking 2nd nationally with 12.76 assists/set.  She has dished out 268 total assists this season thus far, ranking 20th nationally as well.  She also has helped her team to 15.43 kills/set and a .311 success rate on the offensive, which both rank 3rd nationally.  She has also marked 0.38 kills/set on a .368 clip and 2.38 digs/set.

Hana Lishman has started in the libero position in all matches this season, totaling 83 digs for 3.95 digs/set. She has also added 16 assists for 0.76 assists/set and an ace for the Waves.  In her first match this season, she was solid in the back line with 26 digs, and in five matches this season she has marked double-figure digs.  Jaiden Farr and Madison Shields have also entered matches for defensive support, amassing 0.85 and 1.48 digs/set respectively

Pepperdine posted 25-12, 25-18 and 25-22 set scores in the team’s second sweep of the season over North Texas.  The team hit for a .327 success rate with 45 smashes, while allowing the opposition only 27 kills on a .089 output.  The Waves added six aces, 60 digs and 4.0 team blocks, compared to the Mean Green’s three aces, 46 digs and 2.0 blocks.  Scully and Ahrens each tabbed double-doubles with 11 kills, 13 digs and 10 kills, 10 digs respectively.  Frohling led the team with 15 kills and each Frohling and Scully put up two aces.  Sato amassed 36 assists and 10 digs for her second double-double of the season.  Lishman added 12 digs as well and Alli O’Harra led with three blocks.

Pepperdine and Nicholls State have faced once in 2004 with the Waves taking home a five-set victory.  This season, the Colonels have gone 2-5 overall with recent losses to Houston and UL-Lafayette and a win over Mississippi Valley.  The team amasses 10.5 kills/set on a .157 hitting percentage, along with 9.5 assists/set, 1.7 aces/set, 11.9 digs/set and 2.0 blocks/set.