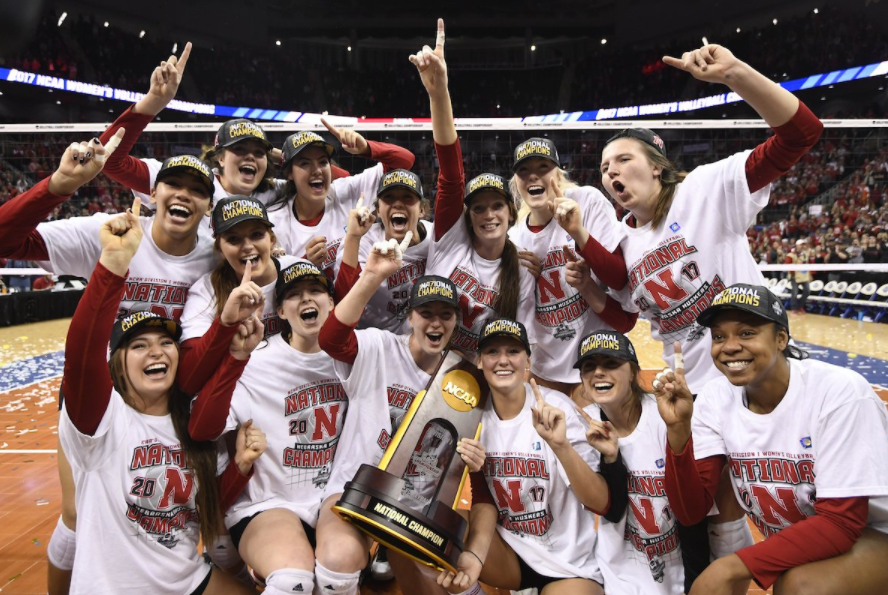 In front of a record-breaking crowd and the clear fan-base advantage, Nebraska took their fifth national championship and fourth under John Cook in a four-set win over Florida.  Current Photo via NCAA Volleyball Twitter

In front of a record-breaking crowd and the clear fan-base advantage, Nebraska took their fifth national championship and fourth under John Cook in a four-set win over Florida. This is the Huskers second national title in three years. It was a rebuilding year for the Huskers with this being a far-fetched idea at the start, having lost to the Gators in the opening weekend but capped off the season with the championship.

Mikaela Foecke led the Huskers with 20 kills along with 14 digs four a double-double while Lauren Stivrins added another nine. Setter Kelly Hunter ran the court with 37 assists, eight digs and six kills on a .600 hitting clip. In the backcourt, Kenzie Maloney picked up 15 digs while Sydney Townsend and Annika Albrecht added another 11.

Nebraska started off the set on a 3-1 run with kills from Annika Albrecht and Lauren Stivrins.  Mid-set the Gators jumped ahead to a 15-11 lead with multiple kills from Rachael Kramer but Nebraska fought the deficit to go on a 7-0 run to go up 18-15. A bad set by Kelly Hunter stopped the run but they couldn’t hold on. The Gators tied things up at 22 but a 3-0 on two Florida errors and a Mikaela Foecke kill left the Huskers with the first set 15-22. It was a set riddled with errors on both sides, with low hitting percentages, with the Huskers hitting -.081 while Florida hit for .025.

It once again was a 3-0 start for the Huskers in the second set. They continued to build on the lead with a stronger attacking performance at 21-12 before an Albrecht hitting error. A kill from Rhamat Alhassan and Carli Snyder moved the score to 22-15. A monster Foecke kill sent the Huskers ahead 23-15 before a Snyder and Shainah Joseph kill brought the Gators to 23-17. A Florida attacking error sent the Huskers into set point before a Foecke kill ended the second 25-17. The second set saw a more improved hitting percentage from Nebraska as they hit .417 to Florida’s .108.

Florida started off the third set with the 2-0 lead after two kills from Joseph but Nebraska quickly jumped back to tie things up at 3-3. After a few back and forth plays the Gators pushed their lead to 10-6 off three Nebraska errors and a service ace. They extended their lead to 12-7 before an Albrecht kill stopped it but Snyder brought it right back into Florida’s hands. A troubled Nebraska defense let Florida take a 19-12 lead. Nebraska didn’t give up, coming back to cut the lead to five at 22-17. Kills from Snyder and Joseph along with a Husker error sends the match into four sets at 25-18.

Nebraska stepped up their play from the third set by starting with a 4-0 lead off kills from Hunter and Foecke along with a block and bad set from Allie Monserez. A Snyder kills stopped the Husker run but went back to the service line and missed her serve. That sparked another 5-0 run for the Huskers. Florida began to chip away at points to make it 14-10 on a 4-0 run. Nebraska fought back to take a seven-point lead at 20-13. Stivrins came in late with two big kills along with a corner shot from Hunter to go ahead 24-15. The Gators stopped one championship point with a kill from Kramer but Foecke came in with the game-winning kill to take home the Huskers fifth national championship and John Cook’s fourth.

For the second time in three years, @Huskervball is your National Champion!

The confetti is falling pic.twitter.com/FmRCGVlcg9