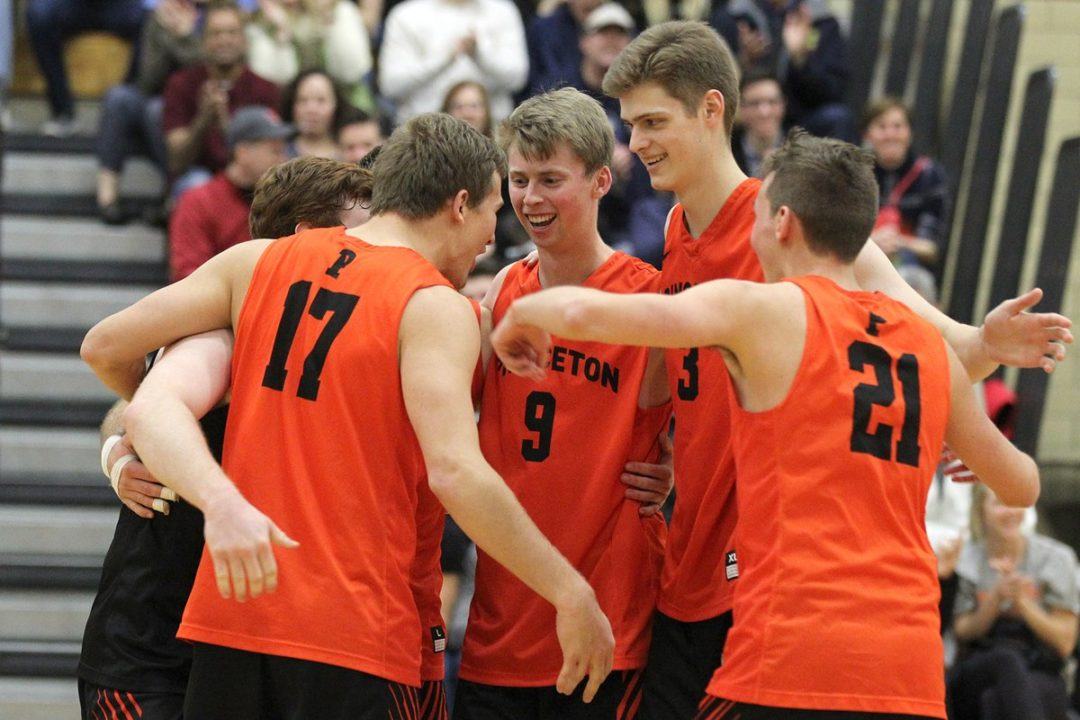 The Tigers clinched a spot in the EIVA Tournament with the sweep of the rival Crimson.  Archive Photo via Princeton Athletics

With only four spots available in the EIVA Tournament, Princeton wasted no time securing its spot in the event with a sweep of rival Harvard Friday night. The Tigers won 25-20, 27-25, 25-18 thanks to an efficient offense and stellar blocking effort.

Senior outside Casey White and freshman outside Erik Johnsson led the Crimson with 13 kills apiece. White hit at a .400 clip and rounded out a double-double with a team-best 12 digs. Sophomore middle Trevor Dow added six kills, while hitting .714 for the match.

Harvard staved off four Princeton set point chances in Set 1, but could not prevent the 25-20 Tiger win. After a tie at 3-3, Princeton scored nine of the next 13 points to go ahead 12-7, thanks to four Crimson errors and a pair of Luck kills. Four Ratter putaways pushed the advantage to 24-16. Harvard scored four straight, two on Princeton errors, to prolong the set, but a Oboh kill ended the stanza.

Two kills each by White and Johnsson helped Harvard to a 9-7 lead in Set 2. Kills by three different players put Princeton up 11-9. Two miscues plus a block and kill by Dixon pushed the lead to 15-12. The Crimson countered with a 7-2 run, including kills by White and Dow, to regain the advantage at 19-17. Four more Harvard errors put Princeton back on top at 23-22. A kill and a block by Dixon gave the Tigers their first two set point chances at 24-23 and 25-24, before a Huhmann kill and Crimson hitting error secured the 27-25 win.

The teams split the first 20 points of Set 3. Princeton pulled away with a 9-4 run, including two blocks and four Harvard errors. The Crimson called timeout but would get no closer than four the rest of the way. Kills by Huhmann and Luck ended the match.

As much as everybody loves final-night drama, the Princeton men’s volleyball team was happy to leave that for somebody else. Guided by one of the team’s most efficient offensive performances of the season, Princeton clinched a berth in the EIVA postseason for the fifth time in the last six years with a 3-0 home sweep of Harvard Friday night in Dillon Gym.

That victory, combined with Saint Francis’ 3-0 home win over George Mason, clinched the Tigers’ spot in the playoffs. If Princeton wins Saturday over Sacred Heart in the regular season finale, it will be the third seed and face Saint Francis in one EIVA semifinal.

Of course, Sacred Heart will have something to say about that. The Pioneers, a 3-1 winner over NJIT Friday night, will come to Dillon Gym Saturday (4 pm, ILDN) knowing that a win over the Tigers would not only assure their playoff spot, but they would also move past Princeton and into the third seed based on tiebreakers.

Regardless, the biggest goal of the weekend has been assured, thanks to a clutch performance over the Crimson Friday night.

The Tigers had 41 kills and only five errors for a .468 hitting percentage, matching a 2014 win over Saint Francis as the team’s best total during Sam Shweisky‘s eight-year tenure as head coach.

Junior Kendall Ratter led the Tigers with 11 kills and hit .529, while freshman Parker Dixon added 10 kills (.471). Freshman George Huhmann, the reigning EIVA Defensive Player of the Week, had eight kills (.533) and four blocks, while fellow middle Junior Oboh had six kills (.500) and four blocks. Freshman Greg Luck, who clinched the win with his sixth kill of the night, didn’t have an error on 18 swings.

Senior Jonah May, who will join classmate Kurt Thiemann in playing his final home match Saturday, paced the offense with 36 assists, while Dixon had a team-best eight digs.

PRINCETON, N.J. – Despite a comeback in the second set, Harvard men’s volleyball was unable to edge Princeton on Friday evening, falling 3-0 to the Tigers at Dillon Gym.

Harvard will close out the regular season at NJIT tomorrow at 4 p.m. The match will be streamed on Game Central.