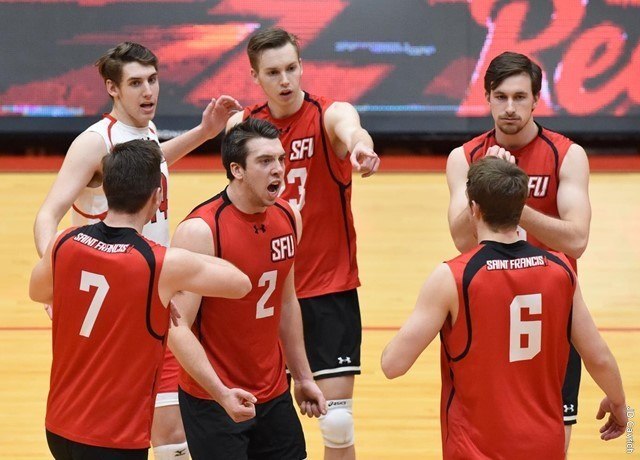 Senior opposite Jeff Hogan led the way for SFU with 23 kills on a .579 hitting effort, and rounded out the double-double with a team-best 11 digs. Redshirt freshman outside hitter Michael Fisher added 12 kills, nine digs and two aces. Junior middle blocker Keith Kegerreis chipped in six kills and a team-leading three blocks.

The teams were even through 30 points in Set 1. George Mason broke away with three of the next four points, but Saint Francis answered with a 7-2 run to turn the 18-16 deficit into a 23-20 lead. Four errors and a Fisher ace aided the rally. George Mason scored three of the next four, staving off a pair of Flash set-point chances, but a Kegerreis kill ended the stanza.

Five different players turned in kills to put the Patriots up 12-9 in Set 2. Hogan downed four kills to pull SFU to within one at 15-14. A service error ended the rally, but the Red Flash managed four of the next five points, including two kills and an ace by Fisher, to vault ahead 18-17. Two Barnes putaways put George Mason back on top at 20-19. The teams tied at 22, before Saint Francis ended the set with kills by Fisher and Hogan.

Set 3 featured 11 ties and three lead changes. George Mason took the early lead and held on to it until Saint Francis scored three straight to go up 17-16 on a Hogan putaway. An ace by Sam Greenslade made it 18-17 Patriots. Down 21-20, the Red Flash got two kills by Fisher to regain the lead.  George Mason had the first chance at the set at 24-23. A block, an ace and a Hogan kill secured the sweep for SFU.

LORETTO, Pa. – Jeff Hogan (Northern Cambria, Pa./Northern Cambria) and the Saint Francis men’s volleyball team defeated George Mason in straight sets in EIVA action on Friday night at DeGol Arena. The Flash won 25-23, 25-22 and 26-24.   Saint Francis pushes its conference record to 9-4 while George Mason falls to 6-7 in EIVA play. The Red Flash clinched the No.2 seed in the EIVA playoffs.

Saint Francis got off to a 4-3 lead in the opening set. Neither team was able to gain much of a lead in the early going. With the Flash leading 11-10, both teams traded points until SFU retook a 21-19 lead after a Mason attack error. George Mason held off Saint Francis’ set point to make it 24-23. A Kegerreis kill gave the Flash a 25-23 win.

The Patriots started strong in the second set, jumping out to a 5-3 lead. Saint Francis came back to tie the set at 7-7, but Mason took a two-point advantage at 9-7 after a SFU attack error. A Fisher kill and service ace highlighted a 3-0 run to put the Flash ahead, 17-16. Both teams exchanged blows before the Flash took advantage of two Mason attack errors to take a 22-20 lead. GMU continued to fight, as the Patriots knotted the score at 22-22. Two kills from Hogan and a Fisher kill closed off the set, 25-22.

Like the second set, Mason took a 5-3 lead in the third set. Back-to-back kills from Hogan tied the set at 7-7. The Patriots rattled off three unanswered points to lead, 10-17, but the Flash responded with a 3-0 run of their own to knot the set at 10-10. Mason took a 12-10 lead out of a GMU timeout. Kills from Stephen Braswell (Manchester, Pa./Northeastern) and Hogan and a George Mason error put the Flash up 17-16. Saint Francis and George Mason traded points, with neither team able to gain more than a one-point lead. Two kills and Fisher and a Braswell kill to put Saint Francis back in front, 23-22. Saint Francis held off George Mason’s set point with three-straight points to win the set and match 26-24.

Saint Francis closes out the regular season tomorrow as the Flash host the University of Charleston for Senior Day at 4 p.m.

After the remaining matches of the night, Mason’s (13-13, 6-7 EIVA) road to the EIVA Championship goes only through a win at No. 13 Penn State on Saturday night and a Princeton win at home against Sacred Heart.

All of the sets were decided by three points or fewer and the score was tied at even 19-19 (first set) or 20-20 (second and third sets). Even sophomore libero Will Calaman‘s career-high eight digs could not prevent the late runs by the Red Flash that decided the sets at 25-23, 25-22, and 26-24, respectively, and helped the home team clinch a postseason berth for second-straight season.

“It’s late in the season and we are playing cleaner volleyball but we are still not executing when it counts,” Mason head coach Jay Hosack said after the match. “We are still a step behind and are trying to figure out how to win rather than play not to lose.”

Mason led 18-16 in the opening set thanks to back-to-back kills from sophomore outside hitter Kyle Barnes and redshirt senior opposite hitter Jack Wilson, who led the Patriots with 11 kills. However, Saint Francis won the following three points and seven of next nine to quickly come out of the hole, forcing Hosack into a timeout at 23-20. The Red Flash earned a triple set point at 24-21 on one of Nick Bennett’s two kills in the match and even though Mason came within one at 24-23, the home team took the lead in the match with a kill by Keith Kegerreis through the middle, 25-23.

Seemingly unaffected by the outcome of the first set, the Patriots jumped into the driver’s seat in set two early on. Although Saint Francis was always close behind, a hustle play by the Patriots forced an attack error by Kegerreis and gave the defending champions their highest lead of the match, 12-9. From then on, Mason became the victim of high offensive pressure by the Red Flash, who were swinging confidently and forcing Mason players of all positions to contribute defensively. Eventually that pressure produced the desired result and Saint Francis went back in the lead at 17-16 with another key, timeout-forcing ace by Michael Fischer. In addition to contributing two of the team’s four aces in the match, Fischer was one of the two Saint Francis players who finished the match in double digits with 12 kills. A powerful kill by Wilson got the Patriots going out of the timeout and the team again locked into the point-for-point tone which dictated the majority of the first set. A kill by Kegerreis and two attack errors by Mason made for a 3-0 Saint Francis run that put the Red Flash up 22-20 and sent the Patriots back to the sidelines for another talk. A kill by Wilson and a solo block by redshirt sophomore middle blocker Langston Payne tied the set at 22 all two points after play resumed, but Saint Francis’ response was more than appropriate. One kill from Fischer and two from the Red Flash’s star Jeff Hogan, who led all players on both fronts with 23 kills and 11 digs, marked another crucial run by Saint Francis that doubled its match lead with 25-22 in the set.

The third set provided more of the same – a closely fought battle in which no lead was too secure or lasted too long. This time it was Mason who grabbed the first set point on a kill by freshman middle blocker Bryce Gatling – his fifth of the match – for 24-23. The Patriots had multiple opportunities to close the set over the course of the long rally which preceded the following point, but ultimately the ball ended up falling on their side of the net in a most bizarre of a fashion. An ace by Bennett and a kill by Hogan then finished off yet another 3-0 Saint Francis run which, in turn, finished off the Patriots and completed the sweep for the Red Flash at 26-24.

“I’m very proud of my team, they are still fighting and they are still working hard, but other teams are fighting for just as much as we are,” Hosack added. “When you go up against a team that has something to play for and you don’t execute the way you’re supposed to, you walk away not feeling too good about the match.”

At this point, there is no plan B for the Patriots. With the crucial Sacred Heart-Princeton match scheduled for 4 p.m. Saturday, by the time Mason’s first serve against the Nittany Lions rolls around at 7 p.m. Hosack’s men will know how much chance they will have to defend their title next week.